India’s media is expanding – but the room for critical voices is shrinking. 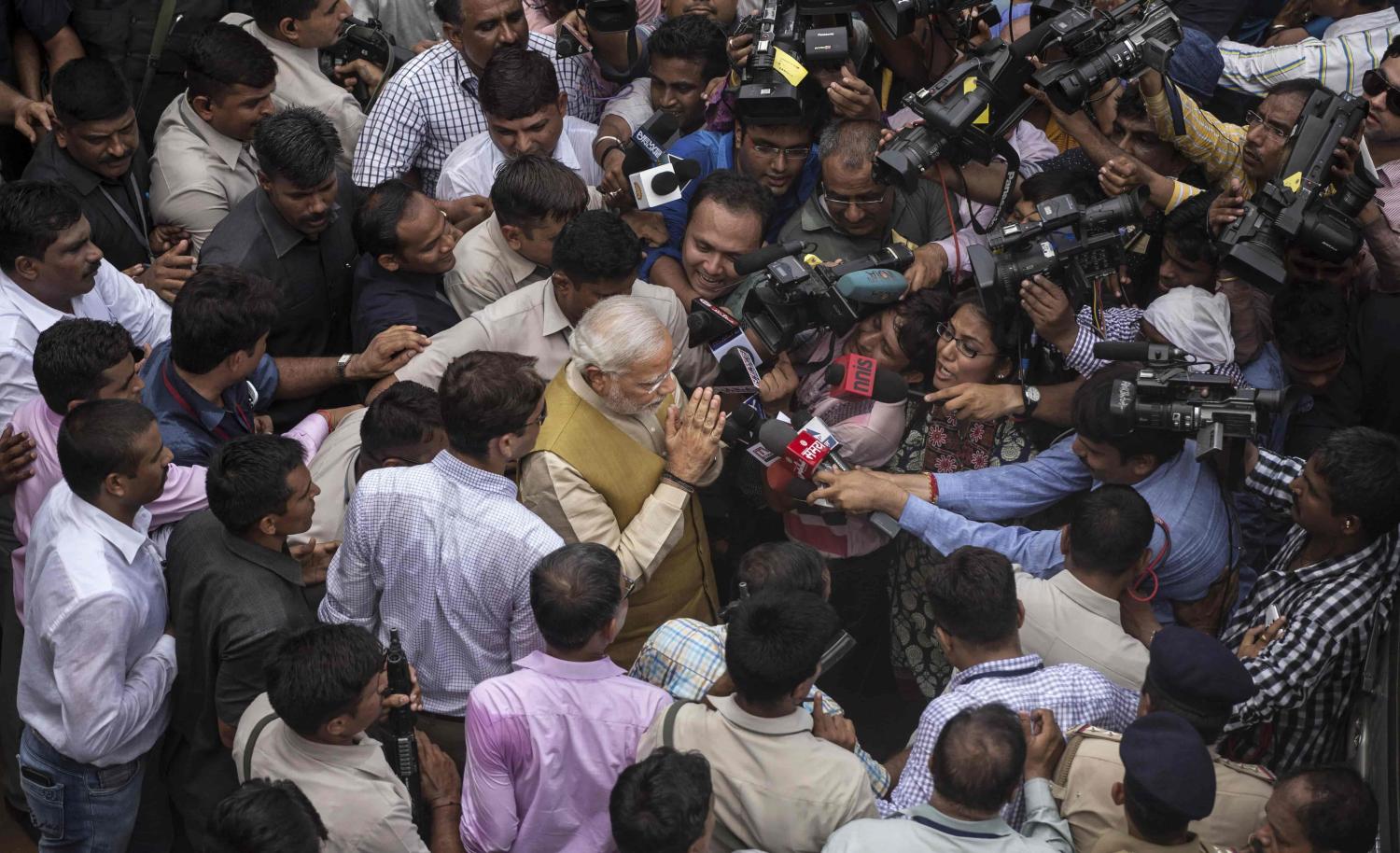 In June, India’s former president Pranab Mukherjee drove home the point to the Indian media that ‘discussion and dissension’ is crucial for a vibrant democracy and that public institutions must be held accountable.

His words could not have been more timely. The independence of the mainstream media is under question and ultra-nationalism has dominated the political narrative in a refusal to accept dissent.

Scores of instances have amplified this fear and explain why the media has failed to effectively perform the critical tasks it is supposed to do in a representative democracy. But some examples stand out.

Around the same Mukherjee voiced his concern, India’s Central Bureau of Investigation searched on the offices and home of Radhika Roy and Prannoy Roy, founders of NDTV, India’s first private news channel. The pair faced reported allegations of defaulting on a loan, which the television company claimed had actually been repaid seven years ago.

NDTV had been consistently critical of Prime Minister Narender Modi’s government in its news bulletins. Although the government maintained the usual comment that ‘the law is taking its own course’, the move was seen as muzzling one of the few liberal voices that are still struggling to survive in India’s media landscape.

Then in September, an internal email showed the country’s top newspaper, Hindustan Times, distancing itself from the ‘Hate Tracker’ - a key initiative of the editor Bobby Ghosh, but one that had drawn the ire of the ruling Bharatiya Janata Party (BJP) and its supporters. The ‘Hate Tracker’ was a national database on crimes in the name of religion, caste and race - essentially a crowd-sourced database of hate crimes in India since September 2015.

In the weeks after its launch, the 'Hate Tracker' received a significant amount of negative coverage from India’s right-wing digital ecosystem, including Twitter handles followed by Modi. Ghosh quit as editor and made no public statement, leading many to see it as a sign that his exit was forced. But these are only the most obvious examples of a growing number of instances where press freedom is seen to have been curtailed.

In a liberal democracy, there are two crucial factors which define the freedom of the press: freedom to investigate, evaluate and censure the system in which the press operates, and freedom from government intrusion.

For a country that used to pride itself on a vibrant press, celebrate its heterogeneity and ability expose wrongdoing, corruption and corporate malfeasance, the exact opposite is happening.

The print and television industry has undergone a massive expansion since the 1990s. There are now more than 100,000 registered newspapers and magazines. India has over 400 news channels in various languages and another 150 channels are awaiting clearance. In short, there are more news channels, newspapers, and digital outlets than ever in independent India - but ironically also perhaps fewer voices that are ready to stand up and be counted.

Given the massive proliferation, an energetic and robust press would be expected to welcome all shades of opinion and encourage dissent and debate. But the opposite is taking place. A new culture has spawned in the last few years, especially with the advent of a right-wing Hindu nationalist BJP in power and its disturbing proximity to proprietors, editors, and pliant journalists in favourable positions in the media.

More corporate groups with strong political connections have now entered newsrooms. Filings with the registrar of companies in the ministry of corporate affairs have revealed that five Indian news media companies — NDTV, News Nation, India TV, News24 and Network18 — are either indebted to Mukesh Ambani, the richest Indian and the owner of Reliance Industries, or to Mahendra Nahata, an industrialist and associate of Ambani’s, who is also on the board of Reliance’s new telecom venture, Reliance Jio.

So what are the chances that media companies - owned by some of those same corporate houses - will encourage independent reporting of its favoured Prime Minister and government?

Serious issues such as the attempted ban on beef, which would mostly cost members of the Muslim minority, the crisis in Kashmir, dissent in universities, intolerance and even the unrest in societies where Dalits – the lowest level of India’s caste system - have been discriminated or killed, have received scant mention in media coverage.

Indian media presently faces an unusually strong executive thanks to the electoral mandate enjoyed by the Modi government. Modi has also not hidden his dislike for the elite English media. He has preferred to punish media outlets by denying them access, though his aides increasingly admit this has been self-defeating.

There is a conscious attempt to target the dissenters as ‘anti-national’, thereby adding a new, more harmful edge to an already polarized public debate. By seeking to cut off government access and running malevolent campaigns against so-called ‘anti-national’ journalists, the aim is clear: create a ‘them’ versus ‘us’ atmosphere.

The facts speak. According to a report published by The Hoot, a website that tracks media, at least 54 journalists were attacked between January 2016 and April 2017. In the same period, at least three television news channels were banned, 45 internet sites shutdown, and 45 sedition cases launched against individuals and groups. Many attacks on journalists go unreported, as reporters often succumb to threats from local politicians, police, and self-appointed vigilantes.

This is especially disturbing for those reporters covering conflict zones such as Kashmir or the central state of Chhattisgarh hit by a Maoist insurgency. The crackdown on journalists is to ensure that such news does not get national and international attention, discrediting the government.

Barely a month after the BJP came into power in 2014, at least 18 people were arrested and questioned by the police in various states of India for ‘unpleasant and provocative’ posts on social media sites against Modi. Many were surprised by the spate of arrests, as Modi himself has been a fierce proponent of dissent. Ironically, in 2012, when he was in opposition, Modi joined a protest against the previous government’s move to block certain ‘hate’ pages and Twitter accounts, by turning his own profile picture to black.

The lack of effective opposition in India has made Modi powerful already. However, forcing the media to be subservient is helping the government to gradually destroy India’s key democratic institution. Journalism has become an increasingly risky profession.

It's not often in politics that a window of opportunity opens as wide as the one Theresa May is looking into right now.
Ian Hill 21 Jul 2022 03:00

Winter is coming: staying the course on Ukraine