A law lecture led to a fast-paced search across the world to trace the most terrible of crimes.

Philippe Sands, the author of East West Street, is one of those rare things, a practising and eminent international lawyer. When I was studying international law in Sydney (quite a while ago now) I remember my professor telling us, with sadness, how little chance we students had of ever developing a successful international law practice, however much we wanted it. Back then, there were as few as five lawyers in the world whose practices were entirely international law, we were told. 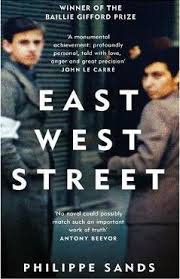 This is a book by a real international lawyer, but is much more than a book about international law. It’s a fast-paced detective story, researched with incredible depth, discovering the lives, roles, and sometimes tragic deaths, of a diverse cast of characters – Jews, Nazis, gentiles, children, parents, grandparents, orphans – before, during, and after the Second World War.

The book came about because Sands was invited to give a lecture on crimes against humanity and genocide, based on his work as a barrister. The lecture was to be in Lviv, a city now within the borders of Ukraine. But the city was formerly part of the Austro-Hungarian empire, when it was called Lemberg, then part of Poland (Lwow), then occupied by the Soviets in the Second World War (Lvov). In the 30 years between 1914 and 1944, the city changed hands eight times. As a consequence, its citizens’ lives were turbulent.

Researching for the lecture, Sands discovered that the town of Lviv was the home of two of the most important figures in the development of modern human rights law – Hersch Lauterpacht and Rafael Lemkin. The lecture led Sands to find out more about them, and the book traces them from boyhood to their lives as law students, as Jews during the war, the loss of their families, and then achievements in changing the global legal framework for protecting human rights.

Lauterpacht played a pivotal role in the Nuremberg trials, advocating for the introduction of a new crime – a crime against humanity. Lemkin passionately argued alternatively for the introduction of the crime of genocide. Ultimately, both crimes became part of modern international law. Lauterpacht’s work inspired the Universal Declaration of Human Rights of 1948, and Lemkin’s work resulted in the Convention on the Prevention and Punishment of the Crime of Genocide.

Sands also research his personal history - his own grandfather grew up in Lemberg/Lviv/Lwow/Lvov. This research, beautifully chronicled in the book, led him around the world – to America, Poland, Tel Aviv, Paris, among many other places. He discovered many connected lives. One of the most disturbing (his)stories was that of Hans Frank, a lawyer who rose through Nazi ranks to become the governor general of occupied Poland, overseeing the Warsaw ghetto and several death camps, including Treblinka.

Frank’s son Niklas had many conversations with Sands, and together, they visited the Nuremberg courtroom in which Frank was sentenced to death. Each conversation, as are countless conversations with characters in this book, was recorded and woven into the narrative, which fast jumps between cities, families, times and centuries. You need to read meticulously, and sometimes re-read, to keep track of each intricate storyline.

At the beginning of their relationship, Niklas was skeptical that his father, Frank, was a killer. By the time of their Nuremberg visit several years later, Niklas handed to Sands a photograph of Frank pictured just after his hanging in 1946. ‘Every day I look at this’ Niklas said. ‘To remind me, to make sure, he is dead.’

This is a book about those who died, but also those who survived – and of unforgettable stories.