A former Australian ambassador to Germany reflects on the Chancellor’s significant impact in the Indo-Pacific. 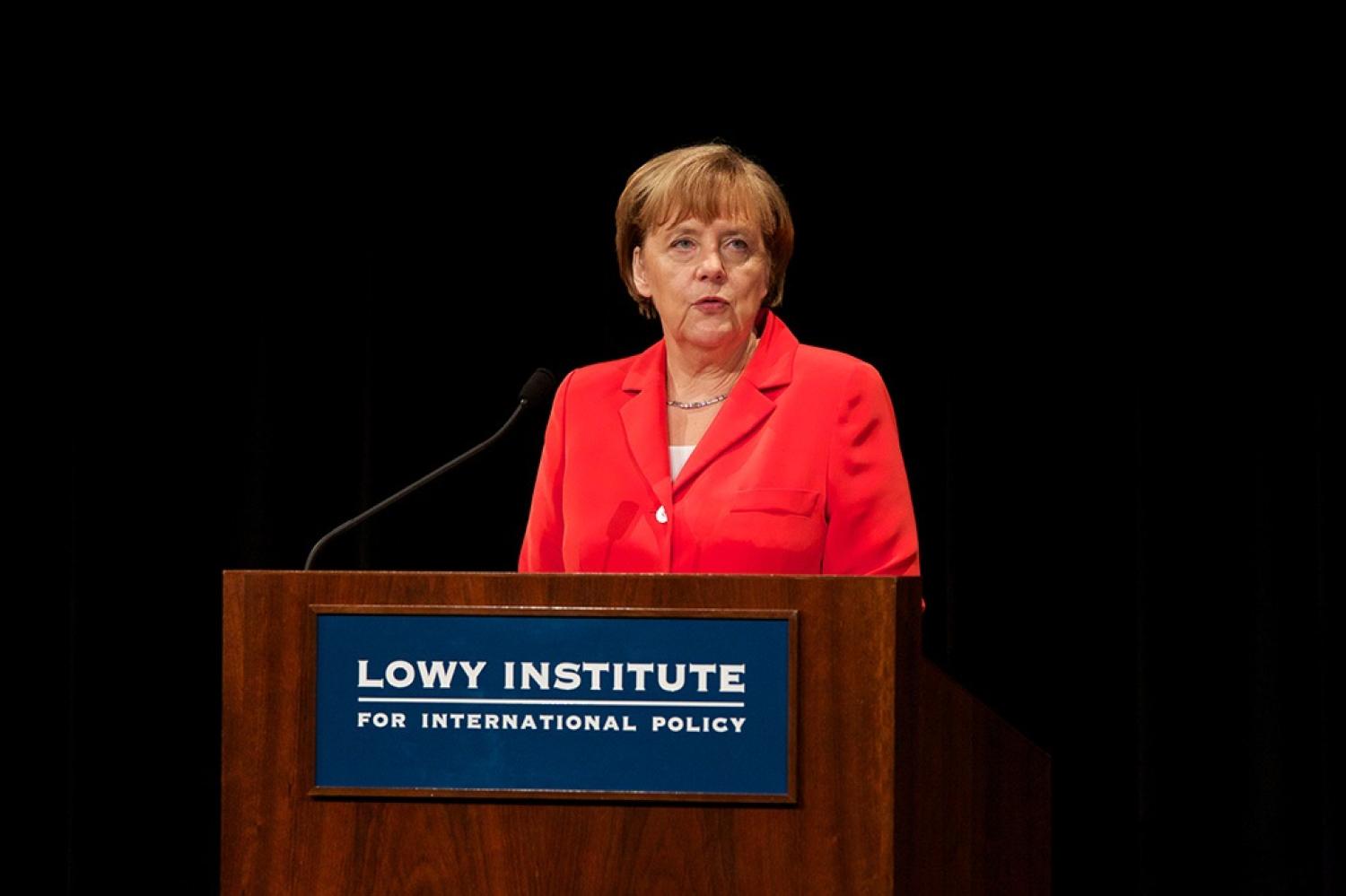 Angela Merkel had already been Chancellor for about six months when I commenced as Australian Ambassador to Germany in April 2006. Her tenure as Germany’s head of government has seen four further Australian heads of mission take up residence in Berlin, and the Australian prime ministership change hands seven times. Her term doesn’t actually finish with the weekend’s elections – the coalition building process could take weeks or even months, and she will continue on in the meantime. But the end is finally in view. Her retirement will require some adjustment for Germans themselves – particularly those in their early twenties or younger who have no memory of any other national leader. The international community will also need to adapt. Australia will join a long queue of countries seeking to establish a productive relationship with her successor.

Under Merkel’s leadership, Germany played an important role in responding to international issues that mattered to Australia.

The Australian representative in Berlin has to work creatively to gain access to the Chancellor and senior ministers. There are many pressing foreign policy priorities for the leaders of Europe’s largest economy and the relationship with Australia is never going to be at the top of the list. Germans generally think about Australia first as a holiday destination – they have romantic ideas about our landscape, and an innocent fascination with our indigenous culture. But Merkel and her advisers took our role in the Indo-Pacific seriously, and she was always interested in hearing Australia’s perspective on regional security and development issues. In my own conversations with her, I was always struck by how well informed she was about events in Australia, and how concerned she seemed to be for us when natural disasters struck, such as the bushfires of 2008-09.  She often displayed a warmth in person that was at odds with her serious public image.

Under Merkel’s leadership, Germany played an important role in responding to international issues that mattered to Australia. Afghanistan was one of them. No matter what we might think about how it all ended, the intervention in that troubled country was still a defining exercise in international security collaboration, and Germany played an important part. More than 150,000 German troops served in Afghanistan and 59 of them lost their lives. We Australians sometimes seem to think it was only the Americans, British and ourselves. It was a difficult call for a nation which, for obvious historical reasons, feels uncomfortable about its armed forces operating outside its own borders. I joined forces with the ambassadors of other contributing nations – Canada, the Netherlands and others – to engage Merkel and influential Bundestag members on the importance of the stabilisation mission at that time. Her government’s commitment to Afghanistan, despite strong opposition at home, helped bridge a strategic divide across the Atlantic at a time when differences over Iraq threatened to undermine the NATO alliance.

I also had the opportunity to watch how Merkel worked with Australia and others in dealing with the 2007-08 global financial crisis. She played a leading role in the European and broader international response, accepting the need for strong state intervention despite Germans’ deep-seated aversion to taking on debt – a neuralgia often attributed to the traumatic economic meltdown the country experienced in the 1920s. Under Prime Minister Kevin Rudd, Australia was keen to leverage Merkel’s leadership within the European Union and G20 in support of a coordinated global approach to fiscal and monetary stimulus. We also wanted to ensure that the situation in our region was fully taken into account. The centrepiece of Rudd’s visit to Berlin in July 2008 was a detailed discussion with Merkel and her advisers about the way ahead for the international crisis response. Her impressive scientific intellect was on full display as she engaged enthusiastically with us on the intricacies of the global financial system. Some of us struggled to keep up. She told the joint press conference afterwards that it had been “a lot of fun”.

Merkel visited Australia after my time in the role, to attend the G20 summit in 2014. She managed to slip out to see something of real Australia, mixing with pub-goers on Brisbane’s Caxton Street for some impromptu beers one night. One establishment obliged by playing Nena’s 99 Luftballons. Her speech to the Lowy Institute in Sydney highlighted the wide range of international preoccupations for a German leader – from the rise of China to the management of Putin’s Russia. During her visit, she and Prime Minister Tony Abbott also signalled their desire to progress an EU-Australia Free Trade Agreement, an initiative that remains a work in progress today. Its momentum is now potentially vulnerable to French anger over the submarine contract cancellation, and Australia may need some more help from Berlin in taking it forward.

A strong humanitarian commitment remains a hallmark of modern Germany, and Merkel’s own family narrative aligns with this.

There could be little doubt about Merkel’s commitment to climate change action. Her critics say that her green credentials are at odds with Germany’s enduring status as the world’s biggest brown coal producer and its gas-guzzling automobile industry. But she showed that it’s possible to manage domestic sensitivities while also taking on an international leadership role. She consistently deployed her influence in support of the climate science and exhorted others to join Germany in making clear commitments. In her 2014 Lowy Institute speech she delivered a clear message about the importance of action in this region. She did not target the Abbott government too directly, but there was no mistaking her point.

Angela Merkel’s detractors also criticised her decision to open the gates to a surge of Syrian and other asylum seekers in 2015. It was certainly controversial at home, and may have helped boost the rise of the German far right. It could not have been more different to Australia’s own bipartisan approach to illegal arrivals. But in taking this decision, she was tapping into an enduring eagerness on the part of many Germans to show the world how far they have come since the Nazi era. A strong humanitarian commitment remains a hallmark of modern Germany, and Merkel’s own family narrative aligns with this – her father, a pastor, moved East to serve his fellow Germans behind the Iron Curtain when thousands of others were heading in the other direction. A demonstrated commitment to the human cause, together with Germany’s willingness to deploy more of its significant financial resources in the Indo-Pacific, will make her country an important potential partner for Australia in the years ahead.

Merkel and Trump may be contrasting personalities, but this is not necessarily a handicap to a functional, pragmatic relationship.
Lauren Williams 15 Dec 2016 07:05

Merkel pays the price for a bold stance on refugees

Merkel has vowed to deport many new arrivals and a bill to open deportation camps has just been passed.
Rachael Buckland 31 Aug 2017 15:50