Diego Garcia: The US has a clear choice

The Mauritian ambassador to the UN on recognising the country’s sovereignty over the Chagos Archipelago. 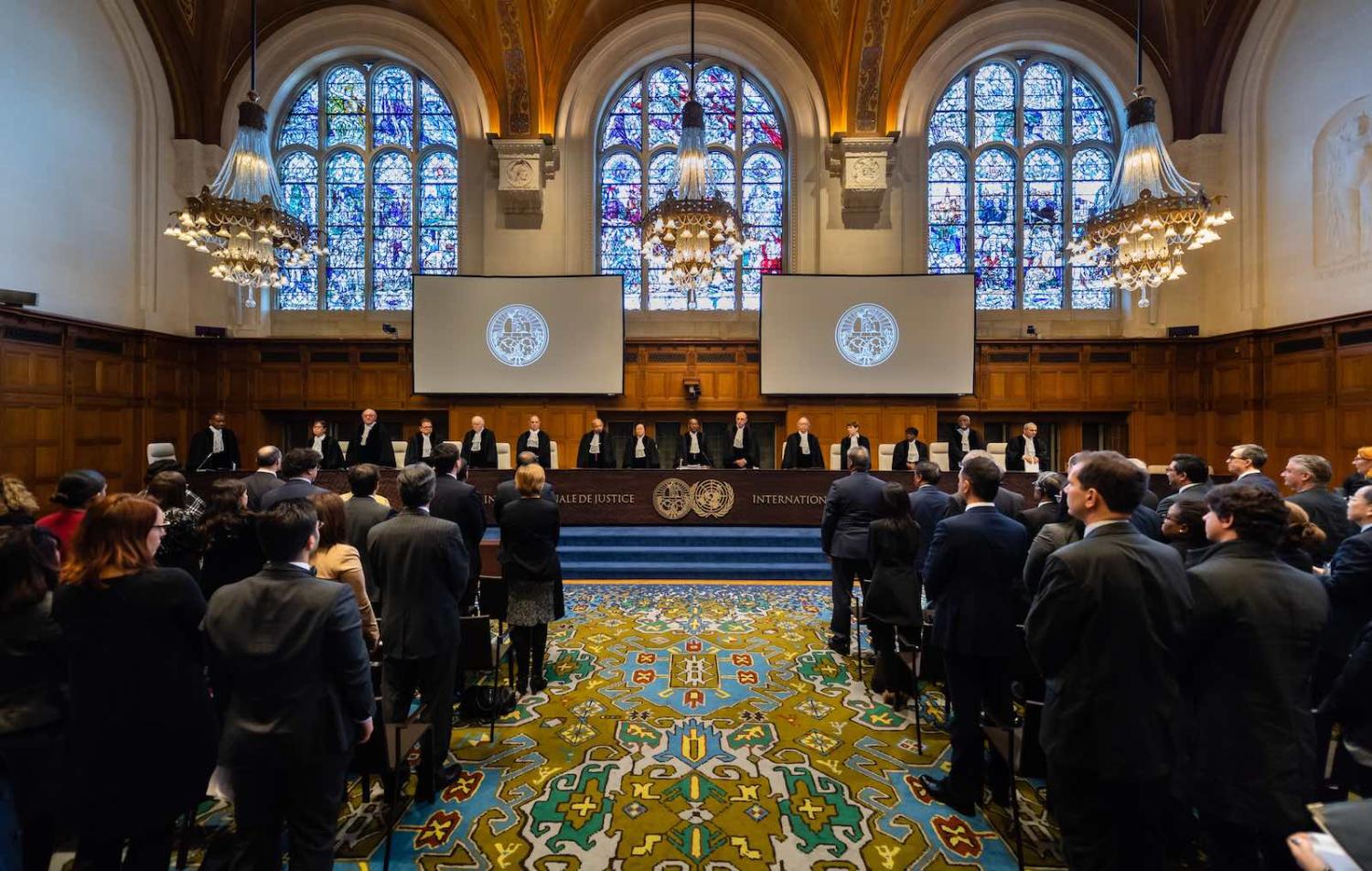 The International Court of Justice delivers its Advisory Opinion on the 1965 Separation of Chagos Archipelago from Mauritius, The Hague, 25 February 2019 (Wendy van Bree/UN Photo)
Published 14 Aug 2020

Mauritius is the legitimate sovereign over the Chagos Archipelago, including the island of Diego Garcia, which hosts an important US military base in the Indo-Pacific region. The government of Mauritius has publicly announced its willingness to enter into an agreement that would preserve the base, including with British involvement if desired, and keep the United States engaged in the region. What Mauritius is proposing is in the interests of the US and the British, as well as Mauritius and the countries in that part of the world.

In the mid-1960s, the British government of the day excised the Chagos Archipelago from Mauritius during the process of decolonisation and concluded an agreement with the US which allowed the latter to set up a naval base in Diego Garcia, the largest island of the archipelago.

That unilateral dismemberment of Mauritian territory has now been clearly established as illegitimate through the 2019 Advisory Opinion of the International Court of Justice and by Resolution 73/295 of the United Nations General Assembly. All UN member states as well as UN Agencies and specialised bodies are now required to support the completion of the decolonisation of Mauritius and to refrain from any act that would give recognition to the unlawful British administration of the islands. Mauritius has long sought their return to its legitimate and sovereign control. International law is unequivocally on the side of Mauritius, and the British now have an opportunity to withdraw in good grace, before their position becomes untenable.

The plight of the former inhabitants of the Chagos Archipelago, people of colour whom the British forcibly displaced from their homes, is not likely to be forgotten. Nor is the systematic refusal of the UK government to allow their return.

Mauritius recognises the security risks in the Indo-Pacific region, and it is conscious of the great value in having the US engaged in the region, including through the base on Diego Garcia. We fully understand the key role the base has played in ensuring stability in the region. There is a clear need to address multiple security challenges, including curbing trafficking of humans and drugs, preventing terrorism and keeping trade routes safe. For all these reasons, we have publicly stated our willingness to have an arrangement with the US so that it could continue to use the base. Indeed, we are willing to make a long-term arrangement – for 99 years, if so desired – that would last well into the next century, and there is a consensus among the major political parties in Mauritius to allow such US presence. The agreement which Mauritius offers is far better for the US than the current British deal, which expires in 2036 and the renewal of which would, again, be unlawful under international law.

As comfortable as the US may feel with the UK under their current agreement, the writing is on the wall: the UK’s stand in rejecting the ICJ Advisory Opinion and the accompanying UN General Assembly resolution is not sustainable. The British Labour Party has officially committed itself to comply with the ICJ ruling when it comes to power. Even now, the Prime Minister is under pressure from parliamentarians to comply with the ICJ ruling to avoid humiliation, isolation and loss of credibility on the international stage. The UK has already failed to get its candidate re-elected to the ICJ because of its ongoing violation of Mauritius’ sovereignty – the first time a Permanent Member of the Security Council lost a seat on the Court.

Following Brexit, the UK’s efforts to establish itself as a global power will inevitably be further hampered by its own refusal to abide by the rule of law – a principle that has traditionally been upheld with great pride by the British people. Sooner rather than later, the UK will realise that its own interests require it to get on the right side of history, support full decolonisation, and move with the momentum of the Black Lives Matter movement. The plight of the former inhabitants of the Chagos Archipelago, people of colour whom the British forcibly displaced from their homes, is not likely to be forgotten. Nor is the systematic refusal of the UK government to allow their return. Pressure will continue on the UK by the membership of the UN, the African Union and not least its own citizens.

Already UN maps clearly identify the Chagos Archipelago as part of Mauritius, in conformity with the ICJ’s ruling and the General Assembly resolution. The UK’s membership in organisations where it claims to represent the Chagos Archipelago will continue to be challenged. In short, its defiance of international law cannot continue much longer in the face of the opposition of the overwhelming majority of states.

It is therefore in the interest of the US to seize this opportunity to engage with Mauritius in concrete discussions for a long-term agreement. This trajectory can lead to an outcome that will be beneficial to all concerned.

While the exact terms of any agreement would have to be negotiated, the Government of Mauritius has made it clear that it has no desire to impose itself in the running of the base. We wish to have our rightful sovereignty recognised as a matter of principle and national fulfillment. We are aware that continuation of the base will require accommodation on our part, and we are willing to talk. For example, any resettlement could be restricted to other islands which lie at least 100 miles away from Diego Garcia, in order to ensure that the operation of the base is not disrupted by such resettlement. But we would expect that Mauritians, especially those of Chagossian origin, would be employed on the base as civilian workers.

Some have questioned whether Mauritius could be a reliable partner for the US. There is no basis for any doubts about our reliability. As a stable democracy with strong ties to the UK, US, Australia and especially India, Mauritius can offer the necessary guarantees that the US requires to ensure its long and unimpeded use of Diego Garcia. The growing security partnership between India and the US offers even greater assurance to the US, since Mauritius will not do anything that could adversely affect India’s security interests.

We are also very aware of our obligations under the Pelindaba Treaty, which restricts the use and stockpiling of nuclear weapons in the African region. This is a sensitive topic, no doubt, but we are certain that constructive negotiations will lead us to a solution that will satisfy both Mauritius’ obligations under the treaty and US national security interests.

The US now faces a choice. Washington can stay in alignment with London’s illegal position until that is no longer tenable or a Labour government returns the Chagos Archipelago to the effective control of Mauritius. Or it can work constructively with Mauritius and the UK to reach a new arrangement for the base, one that respects Mauritian sovereignty, fully protects US interests and reinforces the US position as a supporter of international law. Such a course will send a clear signal to others in the region and beyond that the US and UK are defenders of the international rule of law, respect the sovereignty of others and support decolonisation. And above all, it would create a more stable and secure position for the US on Diego Garcia, and allow it to play a key role in Indo-Pacific security well into the next century.


This article is published as part of a two-year project being undertaken by the ANU National Security College on the Indian Ocean.

Previous Article
From Santiago to Sydney, opening Latin America with fibre-optic cable
Next Article
Sri Lanka’s elections: Another step in the wrong direction

As Indonesia takes the G20 presidency solving the country’s food security crisis should be top of the agenda.
Rodger Shanahan 1 Feb 2017 14:31

Russian and Iranian sunk costs in maintaining the Assad regime in Syria are significant, while Washington's are minimal.
Sophie Raynor 2 Sep 2019 16:00