Australia seems set to end this year about twice as dependent on China for its two-way trade than on the United States. 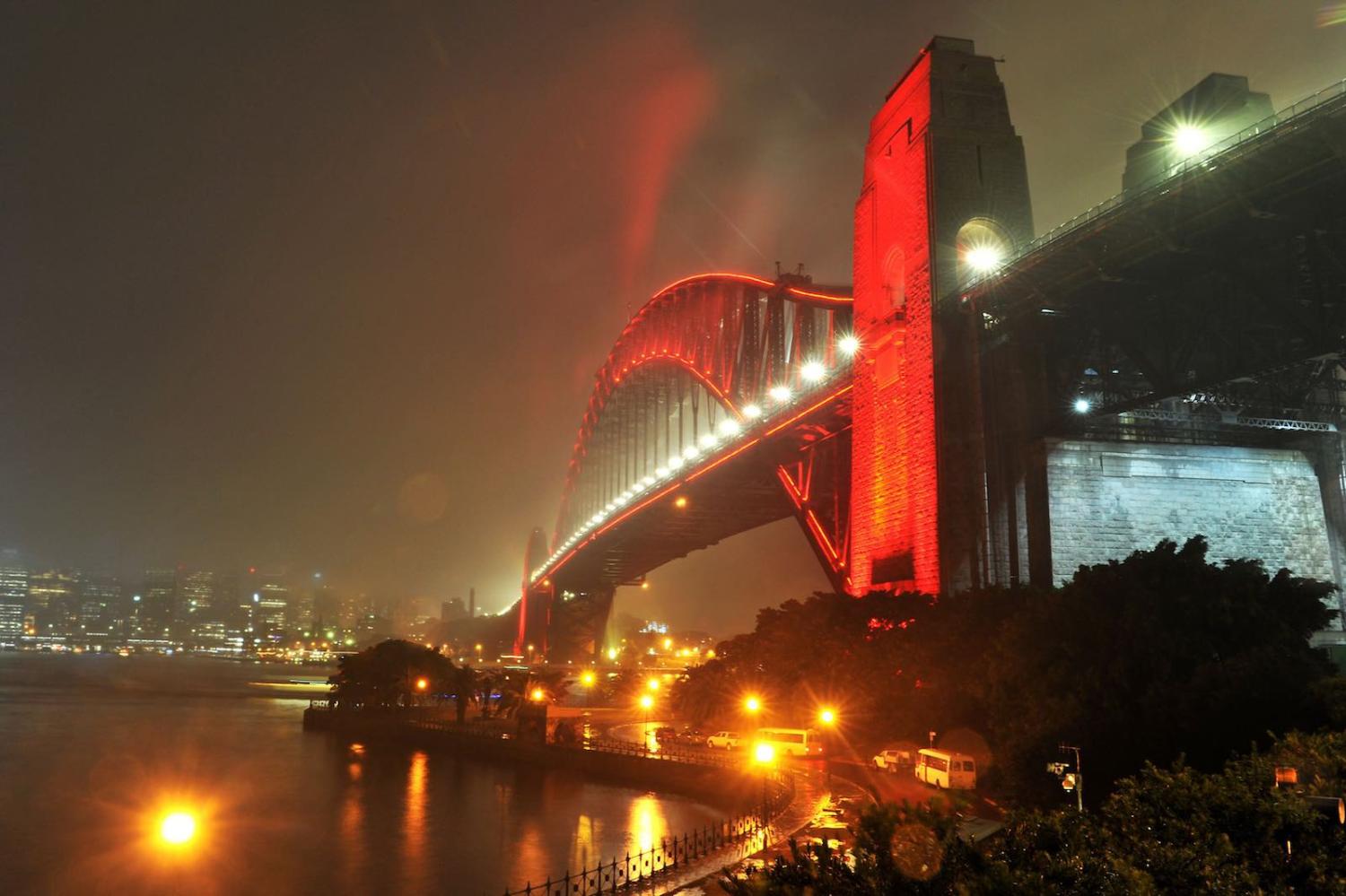 The Sydney Harbour Bridge is lit up in red ahead of the Lunar New Year in Sydney in February (Photo: Farooq Khan via Getty)
Published 15 Aug 2019     Follow @Greg__Earl

If Australia’s senior international ministers were surprised by the sharpness of US Secretary of State Mike Pompeo’s approach to economic dependence on China at the recent AUSMIN talks, they should have studied the US trade data the previous day.

A great divergence has opened up between the US trade relationship with China and that of Australia. If current trends continue Australia seems set to end this year being about twice as dependent on China for its two-way trade than on the US.

So far this year, China has fallen from the largest US trading partner to number three behind Mexico and Canada, or put another way from a longstanding 16% of the two-way trade share to 13% as of June.

This shift reflects both the rhetoric and the tariff reality of the US-China trade tensions, but more notably arguably lays the groundwork for even tougher rhetoric about China, as occurred at the AUSMIN talks. However, the move to delay implementing the latest tariffs on a range of products suggests there is at least some rising concern about what the decline means for US supply chains.

The situation is quite different in Australia. The two-way China trade share has steadily been rising from 21% to 25% over the past five years, and it is picking up further this year. For example, good exports have risen 27% over a year.

And this is more than a story of iron ore, or increasingly students. Australian imports from China have also been growing at a faster rate over the past five years than exports, and faster than imports on average from elsewhere. This underlines the integration of the two economies. The Reserve Bank of Australia has pointed out this integration also extends to lending.

There is no clear correct answer to this China dependency conundrum, although it is particularly confused by the constant mixing of apples and oranges in the data used to make the claims.

As noted here and here, this has led to an emerging new line in strategic analysis that Australia needs to reduce its dependence on China, and this was underlined by an ABC News report last week that cited unnamed intelligence agencies urging this approach to the government.

While it might be more comfortable to be less exposed to China, there are two fundamental problems with implementing this new dependency theory.

The first is that shifting trade based on thousands of businesses buying products at the prices that suit them is not going to happen easily or quickly without heavy-handed intervention such as tariffs. Two-way trade growth over five years with the obvious alternatives the US (4.4%), Japan (2.8%), and Indonesia (1.9%) lags behind China (8.1%). Only India seems to offer some hope at 15.2%.

Second, even China sceptics seem a little at odds over the right approach. While Pompeo seemed to be implying that Australia’s prosperity had been built on China’s unfair trade practices, others (including US Ambassador Arthur Culvahouse here) have taken a different line by arguing that Australia is much more dependent on economic ties to the US than China.

Pompeo had a bet this way as well. He claimed the US invested US$170 billion in Australia “each and every year”, when this is more likely to have been a reference to the US direct investment stock of about $190 billion. Annual investment flow is much lower.

Meanwhile, a new contribution to the dependency debate has emerged with this Australian Financial Review analysis suggesting that China is actually more dependent on Australia when it comes to resources and so would be reluctant to take adverse actions against Australia.

There is no clear correct answer to this China dependency conundrum, although it is particularly confused by the constant mixing of apples and oranges in the data used to make the claims.

Two years ago we published this chart, which sought to place the basic data down in a common format to put the competing claims in some perspective. It seems just as relevant now.

Martin Parkinson, Australia’s departing most senior public servant, is better known for the domestic reforms and controversies during his career leading the Departments of Climate Change, Treasury, and now Prime Minister and Cabinet.

But a little appreciated constant theme through all of these roles and even before has been his sustained involvement in shaping Australia’s approach to economic diplomacy.

So, the points made in his last official speech on this subject to an Asia Society Australia conference last week are worth recording, particularly in this space, when US President Donald Trump is constantly challenging the settled rules in this arm of international relations.

Parkinson seems more comfortable with a messier form of rules-based order than many of his bureaucratic counterparts by accepting that failures of global management under the old Bretton Woods institutions has sparked a legitimate demand for new regional institutions, such as an Asian Monetary Fund. He says:

We should expect, and even welcome, this kind of institutional smorgasboard if it means countries in our region stepping forward to ensure collective leadership and collective resilience.

And Parkinson makes little concession to the new US diplomatic boilerplate that China’s rise has been due to rorting the global system. As he sees it:

The economic success of China is surely the single greatest thing to have happened globally over the last three decades and is to be welcomed, not resented.

When regional leaders such as Indonesia’s Joko Widodo still talk up traditional manufacturing as the driving force of their economic policies, Parkinson has quite serious doubts about whether this will actually work. He argues:

New technology may be reducing the development benefits from manufacturing industries. Countries are reaching “peak” industrialisation at levels lower than they were in the past.

And he says whatever happens with a trade deal, the economic rules-based order has already been seriously damaged by the US-China tensions prompting changed supply chains and production arrangements from new sovereign risks which could last for decades.

Despite all this, he says foreign investors ultimately bet on a country’s national character rather than a narrow checklist and on this measure Australia still stacks up very competitively after three decades of national reform debate.