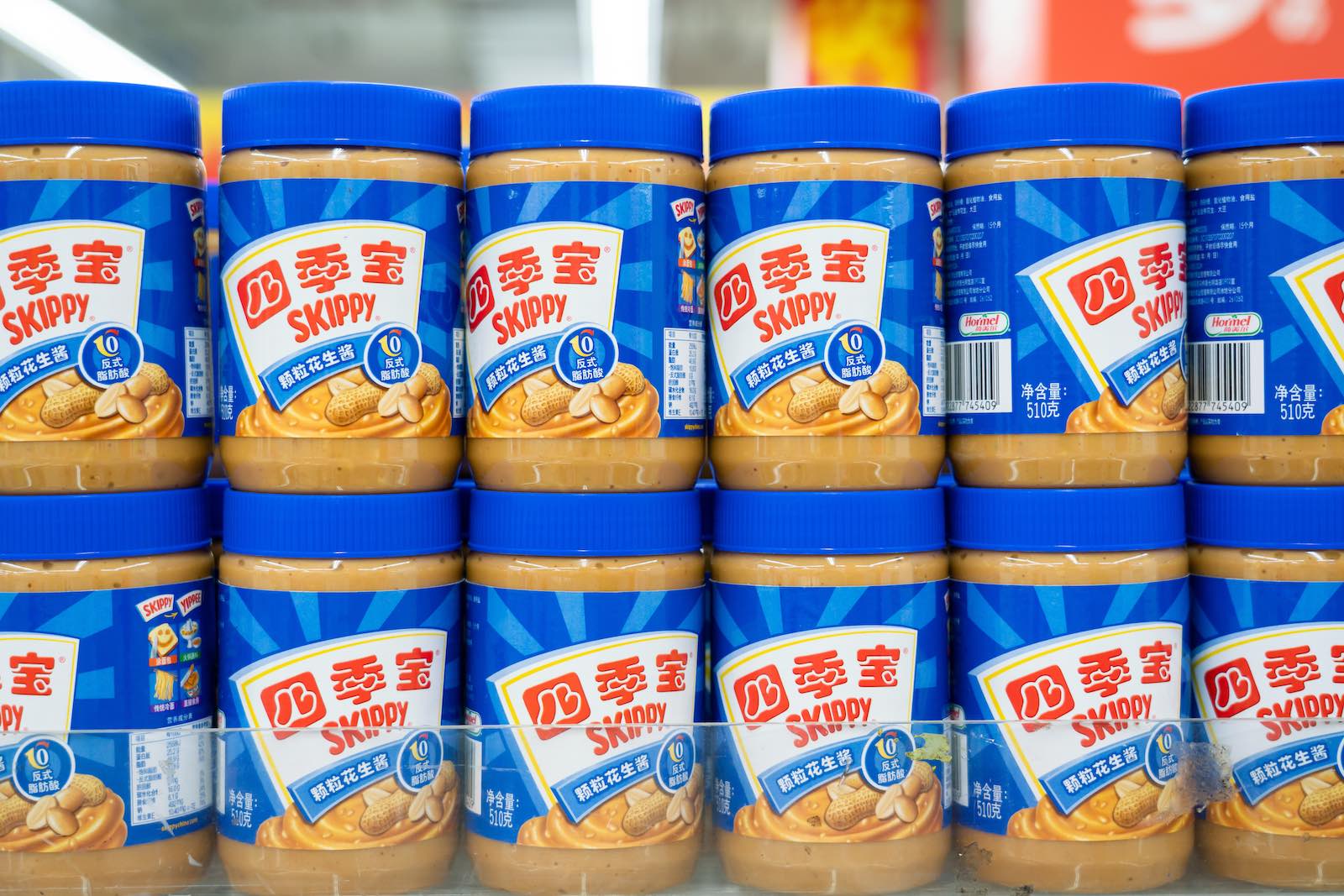 Skippy peanut butter, a best seller in China, which despite the kangaroo-sounding name, is manufactured in the US (Photo: Alex Tai via Getty)
Published 1 Aug 2019 13:00   0 Comments       Follow @Greg__Earl

A new call to split trade negotiation from diplomacy in Australia has once again underlined how the rise of China has unsettled traditional frameworks for making policy about economic and security interests.

The divide between neo-liberal economic policy approaches towards China in economic agencies and more Manichean thinking in security agencies arguably reached a cathartic point with the somewhat casual lease of the Port of Darwin to a Chinese company in 2015.

The hard choices imposed by the growing tension between the country’s biggest trading partner and its main alliance partner continue to throw up interesting new frictions.

Since then the once light touch Foreign Investment Review Board has been placed under the leadership of a former security agency chief, intelligence agencies have been taking companies more into the fold on security threats, and aid spending has been weaponised in the infrastructure wars.

But the hard choices imposed by the growing tension between the country’s biggest trading partner and its main alliance partner continue to throw up interesting new frictions. For example, the Productivity Commission has questioned the economic rationale of some new security spending, while the US Studies Centre recently backed government intervention in business activities to reduce Australia’s economic dependence on China.

Turning liberal economic theory on its head, a report on the US alliance argued:

Now in a swing in the opposite direction a former top trade negotiator Alan Oxley and business organisation leader Innes Willox have backed the removal of the trade function from the Department of Foreign Affairs and Trade (where it has resided for three decades) to allow trade and foreign policy to operate separately. In The Australian Financial Review, they write:

Australia needs a way to talk openly with China – our biggest trading partner – about trade. Differences over security have shut out our officials in Beijing for several years, turning them from players into passengers.

Ending the divide between the economic and security establishments is clearly still a work in progress.

It’s just over a month since the Group of 20 nations leaders piously declared their intention to “realise a free, fair, non-discriminatory, transparent, predictable and stable trade and investment environment”.

But the six days of trade negotiations under way in Shanghai, Washington and Beijing this week are more likely to underline the alarming more recent warnings from the World Trade Organisation (WTO) and International Monetary Fund (IMF) about how trade tensions threaten world growth.

The US-China talks in Shanghai have already ended earlier than scheduled, lending weight to the new speculation that both sides are now inclined to run down the clock past the US election next year before making a serious attempt to strike a substantial deal.

That may give some added momentum to the US-Japan talks in Washington, which were already being driven mainly by the need for some form of face-saving agreement to be announced when US President Donald Trump and Japanese Prime Minister Shinzo Abe meet in September.

All of which will put even more pressure on the meeting in Beijing of ministers from the 18 Regional Comprehensive Economic Partnership countries to produce their promised Asian safety net by the end of this year as a response to global trade turmoil, including an unruly Brexit.

The IMF put some pointed pressure on this meeting with its July update, pointing out that trade volume growth declined sharply to about 0.5% in the first quarter of 2019 and observing that the slowdown was particularly notable in emerging Asia. It said:

But the last-minute decision by India’s Commerce Minister Piyush Goyal not to attend the RCEP ministerial meeting has raised questions over whether India is a meaningful participant. This might divert the ministerial meeting from the core RCEP liberalisation provisions to how to manage India. Australia’s Trade Minister Simon Birmingham has noticeably stepped up pressure on India to make some concessions in interviews before departing for Beijing.

Meanwhile, the WTO’s July mid-year update seemed more targeted at the G20’s empty piousness by pointing out that new trade restrictions in the first half of the year were running at a “historically high level” and the vast majority were actually being imposed by G20 countries.

Nevertheless, amid all this gloom driven by the new competition between the US and China, it is interesting to see that they will be amongst the first signatories (along with Australia) to sign a new cross border dispute mediation convention in Singapore next week. They seem to have accepted they each at least have an interest in resolving offshore commercial disputes.

Papua New Guinea’s Prime Minister James Marape has drawn an evocative line between himself and his resources industry meddling predecessor Peter O’Neill by declaring he doesn’t want the country to be known for its oil, gas and gold.

But given the abandoned plantations which can be readily seen across the highlands, his promise to become the “food basket of Asia” in a speech to the Lowy Institute last week will have prompted many people to think of lost opportunities as much as new ones. (See Shane Mcleod and Jonathan Pryke PNG: Marape’s blueprint for change in a fast vanishing honeymoon.)

Nevertheless, Marape got a perfectly timed vote of support for his approach the very next day from the World Bank in a special analysis of the country’s agriculture outlook.

Agriculture exports have generally been falling over the past decade despite recognition that commercial farming provides the best way to ease the unemployment that contributes to both poor development indicators and violence.

But despite detailing many well-known challenges in transport and finance, the World Bank study contains some quite positive assessments of relatively new developments which it says will help the sector thrive. These include more mixed farming to ride out price downturns and better use land, the development of higher value products rather than relying on commoditised output and new supply chain partnerships with private sector management to replace public sector commodity boards.

In an indication Marape is pushing on an open door with his food production ambitions, the World Bank says: “There is a broad understanding of the institutional and policy shortcomings hampering agriculture sector performance.”