As the DFAT/Ausaid merger recedes in the rear vision mirror for Australia, China talks up scrutiny for bad projects. 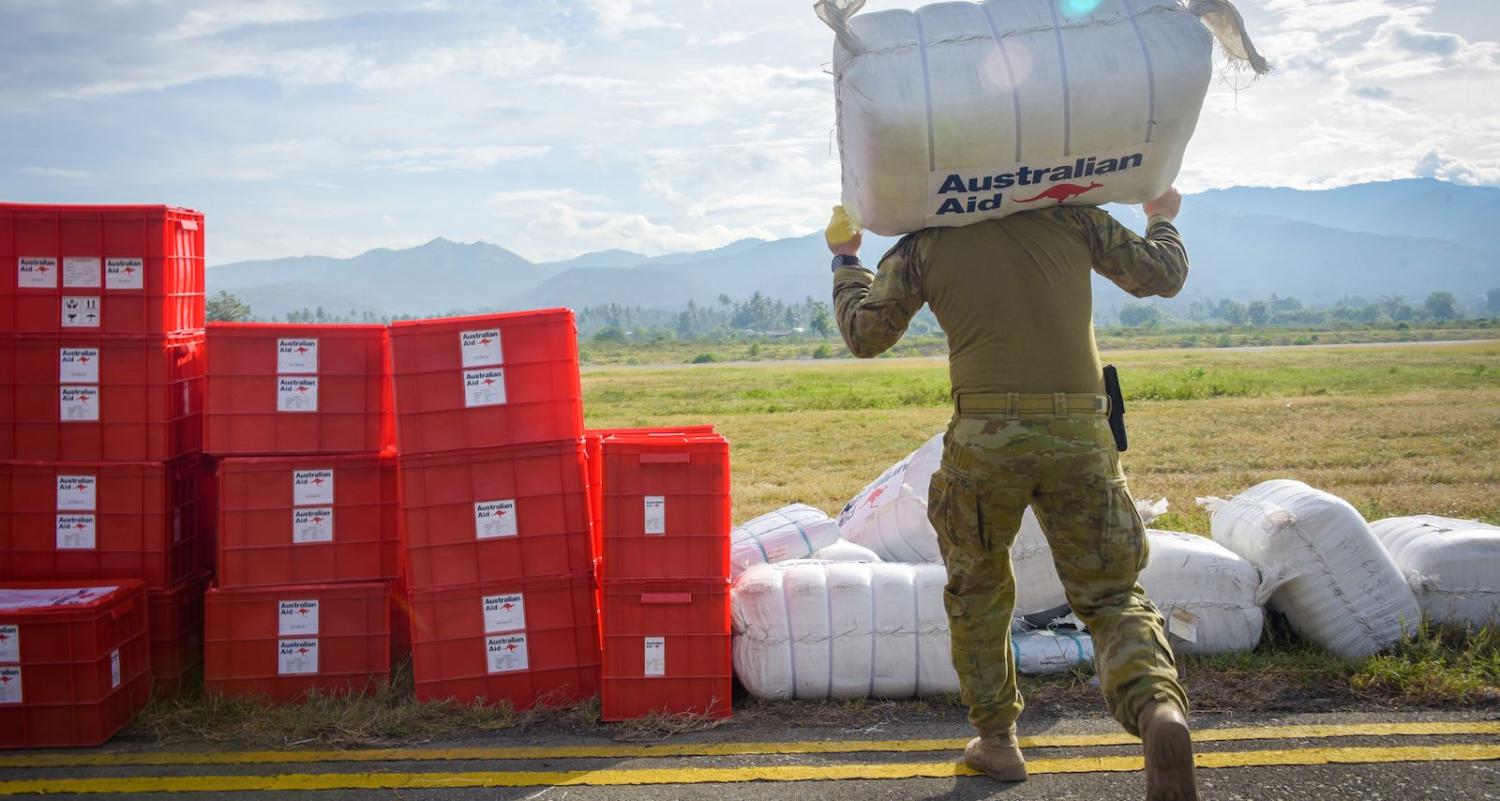 Five years after the Department of Foreign Affairs and Trade (DFAT) swallowed AusAID in the first major spending cuts of the new Coalition Government, two contradictory trends seem to be emerging.

The reality of the takeover is getting some grudging acceptance in the development cooperation sector. But a new challenge is looming as Australia gears up to spend its notional new $3 billion in loans, grants, and export credit mostly for the Pacific in a more competitive and discerning aid environment.

A new challenge is looming as Australia gears up to spend its notional new $3 billion in loans, grants, and export credit mostly for the Pacific in a more competitive and discerning aid environment.

These are the key themes from Richard Moore’s just-released independent review of the merger, the periodic Development Policy Centre (Devpol) survey of the sector, and the debate from the recent overflowing annual Australasian Aid Conference last week.

DFAT secretary Frances Adamson encapsulated the complex internal and external challenges in an opening speech which conceded the pressing need to preserve the department’s diminished aid expertise and the implicit irony of more government money being available just when the “donor-recipient relationship era is passing away”.

Moore’s report brings a balanced perspective to a merger generally disliked in the sector with his own survey that shows a third are positive about the merger, a quarter are negative, and 40% are worried about rising risk. (This new study assesses the risks of the new Pacific infrastructure program.) 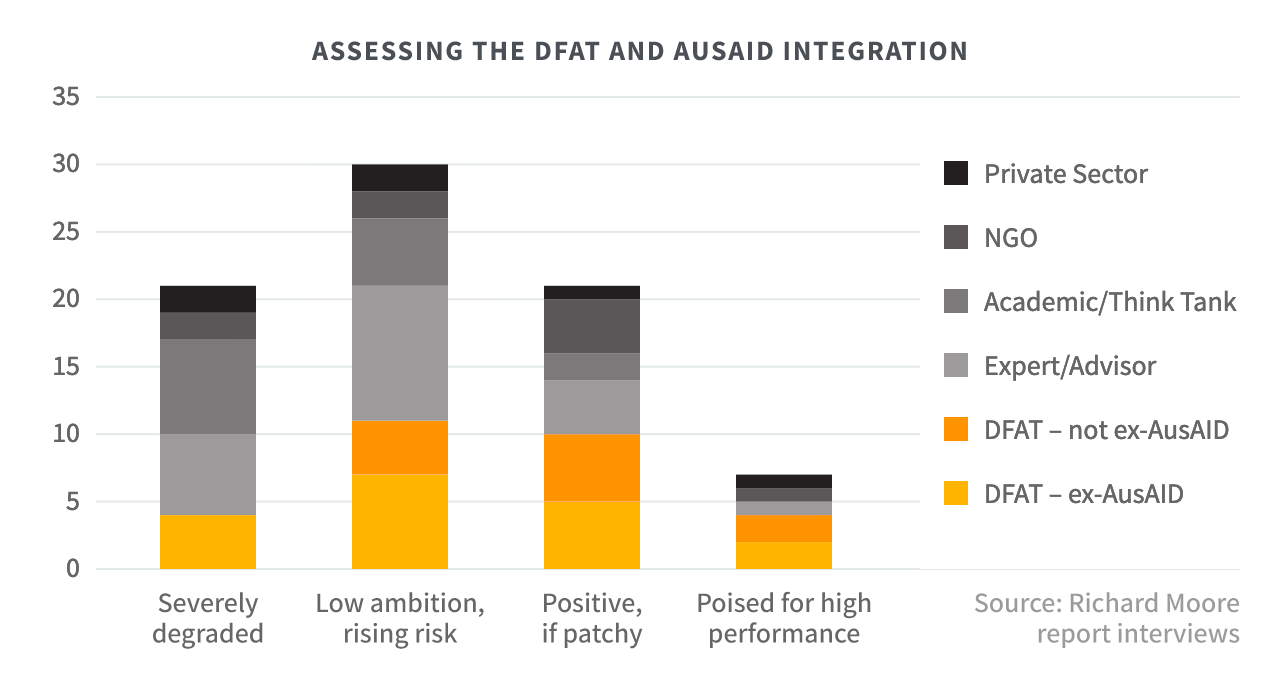 The Devpol survey is less positive with only 17% saying the aid program is “improving” compared with 10% after the merger in 2015, and 78% before the merger in 2013. But somewhat confusingly, a fairly consistent two-thirds, over the same time, think the program is “effective”.

Moore argues the integration has proceeded relatively efficiently; that his interviews showed no sharp opinion divide between ex-AusAIDers and mainstream DFATers; and there are examples of development goals being more strongly advanced through joined-up, whole-of-department efforts.

But he warns the new structure has feet of clay because it is still coming to the end of carefully designed projects from the old order. And then the new order of decentralising project design/control to embassy generalists and outside contractors may not deliver the whole-of-government national interest approach required by the new competitive aid landscape.

So, the most fascinating session at the conference was the panel of three young Chinese academics reinterpreting their country’s lumbering entry to the global development cooperation (or should that be coopetition) scene.

While they rejected the idea BRI 2.0 is underway, this may well be the new public face of the initiative amid slower growth at home crimping the available capital and populist resistance abroad in countries such as Malaysia.

The talk about more scrutiny of bad projects, better coordination by China’s new National Development and Cooperation Agency and a possible future foreign aid role for Chinese NGOs underlined how China is a key player in this sector now.

The call for more multilateral development bank cooperation was somewhat at odds with the Asian Infrastructure Development Bank’s announcement of more stand-alone projects this year after mostly doing joint projects so far.

But the reaching out to Australia appeared to be an olive branch over cooperation in the Pacific. However, whether Australia would want to take up the suggestion of maintaining Chinese-built roads might require a considerable leap of faith.

A no-tariff-rise trade deal between China and the US now seems in sight as US President Donald Trump gives stock market stability a higher priority than his anti-China trade advisers and his security establishment’s desire to kneecap a rising rival.

But that has only raised new questions about how a deal will actually be enforced if, for example, it allows exchanges more Chinese soybean imports from the US in return for letting its state-owned enterprises survive.

Given the Trump Administration’s disdain for the global benchmark World Trade Organisation dispute settlement system, which China tends to support, a special policing system will have to be negotiated before a deal is signed.

The options now seem to range from a joint committee of government officials to a more independent panel of adjudicators to a formal procedure for loosening or tightening the US special tariffs depending on how China implements the deal.

Whichever way this process works is likely to be the first test of whether the two countries can reach some sort of sustainable accommodation.

Doctor in the house

With potential changes in the power structure in India, Indonesia, Thailand, and the Philippines due to elections over the next few months, it is easy to forget that the most interesting recent Asian leadership is still under negotiation.

That was underlined by the manoeuvring over the Malaysian prime ministership this week even as the ruling Pakatan Harapan coalition government is under pressure over a slowing economy.

Anwar Ibrahim was welcomed as the country’s eighth prime minister at a gathering amid rumours of a parliamentary no-confidence motion against his coalition partner and the actual serving seventh prime minister Dr Mahathir Mohamad, who was previously the fourth prime minister.

Mahathir, now the world’s oldest elected leader, regularly talks of needing up to three years in power to fix the country he once dominated, while Anwar sticks with the form of words that he takes over after no more than two years from last May’s election. And supporters of both men seem to be getting restless.

Given the two were once a sort of father/son government team, then bitter rivals, and finally pragmatic opposition partners, they may well be better able to negotiate this than their supporters.

Diplomacy after Covid: No looking back

This will not be the last year the world gathers in a virtual meeting – just think beyond Zoom as the platform.
Susan Hutchinson 29 Aug 2019 06:00

The danger to women from small arms and light weapons should be at the centre of military export controls.
Kyunghoon Kim 20 Jul 2022 10:31