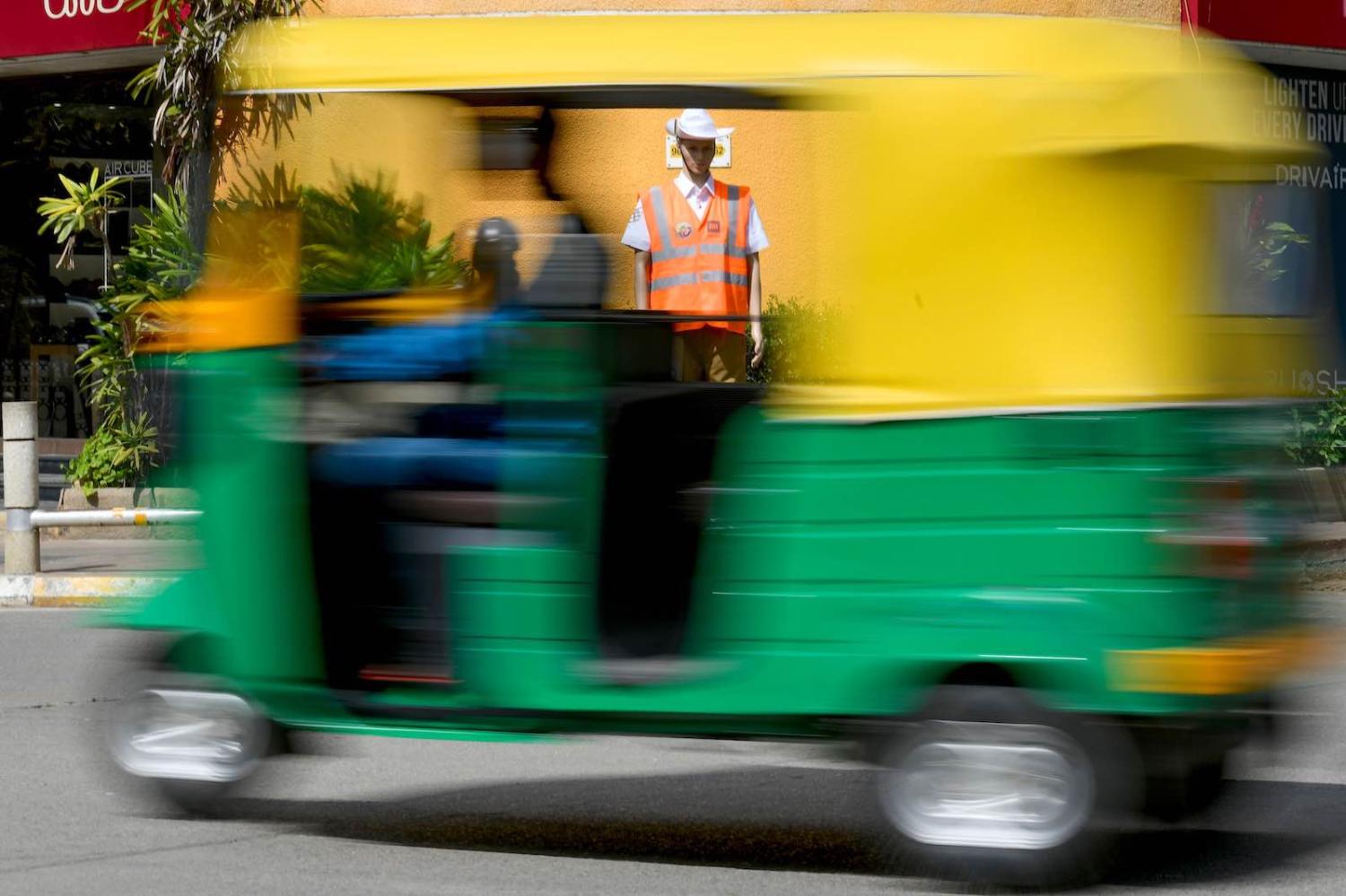 A mannequin dressed as a police officer at an intersection in Bangalore, a new recruit in the southern Indian city in a bid deter traffic offenders (Photo: Manjunath Kiran/AFP/Getty)
Published 19 Dec 2019     Follow @Greg__Earl

India is planning a more expansive approach to economic engagement with Australia just as Australia gears up to restart formal negotiations on a bilateral trade deal, which may possibly involve a narrower agreement than the previous lapsed talks.

Prime Minister Scott Morrison’s visit to India in January is expected to restart bilateral negotiations on the working assumption that Japanese efforts to bring India back into the Regional Comprehensive Economic Partnership (RCEP) fold will not succeed.

But the Indian official overseeing the response to Australia’s Indian Economic Strategy (IES), which was released last year and authored by University of Queensland chancellor and former diplomat Peter Varghese, has flagged the idea that the Indian report will embrace a broader range of industries for future engagement than the Australian report covered.

Former ambassador Anil Wadhwa said at the Australia-India Australia Business Council annual address in Sydney that he was looking at more emerging sectors as well as the 10 sectors that were the focus of the IES. Wadhwa’s report will be released before Morrison’s visit.

While there is not necessarily any contradiction between a narrow formal trade deal negotiation occurring alongside the sort of broader and less formal economic engagement outlined by Varghese in the IES, there may still be some risk of mixed messages.

Meanwhile after expressing some dissatisfaction with the business response to his report about the need to take India more seriously, Varghese has now adopted a more optimistic long-term outlook.

“As reality starts dawning about the (slowing) global economy, the idea of spreading risk will become part of corporate strategy and not just national strategy,” he said during the Sydney event.

But he noted that it had taken more than a decade for the Australia-China economic relationship to blossom after the game-changing 1989 Australia and the Northeast Asian Ascendancy report written by economist Ross Garnaut.

So it might still be a long wait for those hoping that India will offset Australia’s dependence on China.

Southeast Asian countries appear to have become more comfortable with the challenges posed by China’s Belt and Road Initiative (BRI) in a sign that the region’s infrastructure rivalry may be stabilising.

While Australia’s national government continues to view the BRI warily (unlike some states), participants at a regional outlook in Singapore expressed confidence that large Southeast Asian states now had the measure of Chinese financial largesse.

Speakers from these countries said their governments had become confident about negotiating more favourable terms for BRI funded projects, led by Malaysian Prime Minister Mahathir Mohamad’s slashing of the cost of Malaysian rail projects by about a third.

“ASEAN countries are finding they can press for better deals. The BRI is not so sinister. It is a catalyst,” a financial sector figure said at the ISEAS-Yusof Ishak Institute Regional Outlook Forum, which was conducted under Chatham House rules.*

Another speaker noted that while the Chinese-backed Asian Infrastructure Investment Bank was regarded favourably, it was still struggling to deploy its capital. At the same time Japan was retaining its reputation for high quality infrastructure investment.

But another argued that what some saw as comfort with the BRI really reflected caution about debt risks and the quality of the construction.

How much Australian foreign trade and investment benefits from having one of the world’s most multicultural populations is a perennial subject in the debate about institutional diversity.

Now we have some insights into where it counts and where it doesn’t thanks to an interesting question added to the annual Australian International Business Survey run by Austrade and the Export Council of Australia.

Businesses exporting to China, India, Japan and Southeast Asia tend to regard the local diaspora communities as more important to overseas success than those operating in other mostly English-speaking markets.

Overall 26% of the businesses surveyed said multicultural communities were essential or very important in international market development. This includes 25% of goods exporters who say that local diaspora sales help with exports and 38% of services exporters who say the connection helps.

It is also striking that the businesses that most value the local communities for opening doors abroad are those in the training and tertiary education sector which is now the country’s third biggest export.

The AIBS survey has again underlined the delicate balancing act Australian businesses have managing to maintain their engagement with China and the US at time of intensifying superpower rivalry.

There is greater confidence about improved economic growth in the US over the next year compared with China, but the most popular country for new business is still China. And China has supplanted the United Kingdom as the first market for offshore expansion and now only lags the US and New Zealand.

This suggests that more division of the world into separate technology zones like what has happened with 5G telecommunications hardware presents Australian companies with difficult choices.

* Greg Earl was a sponsored participant in the Regional Outlook Forum

Previous Article
Arbitrating business and human rights: What’s in it for women?
Next Article
US-China trade deal, phase one done: Now what?

A global system in flux – from the US to Hong Kong, in politics as much as the economy – ultimately needs leadership.