A unifier, Michael Somare always had Papua New Guinea’s independence in mind in dealing with Australia, or any nation. 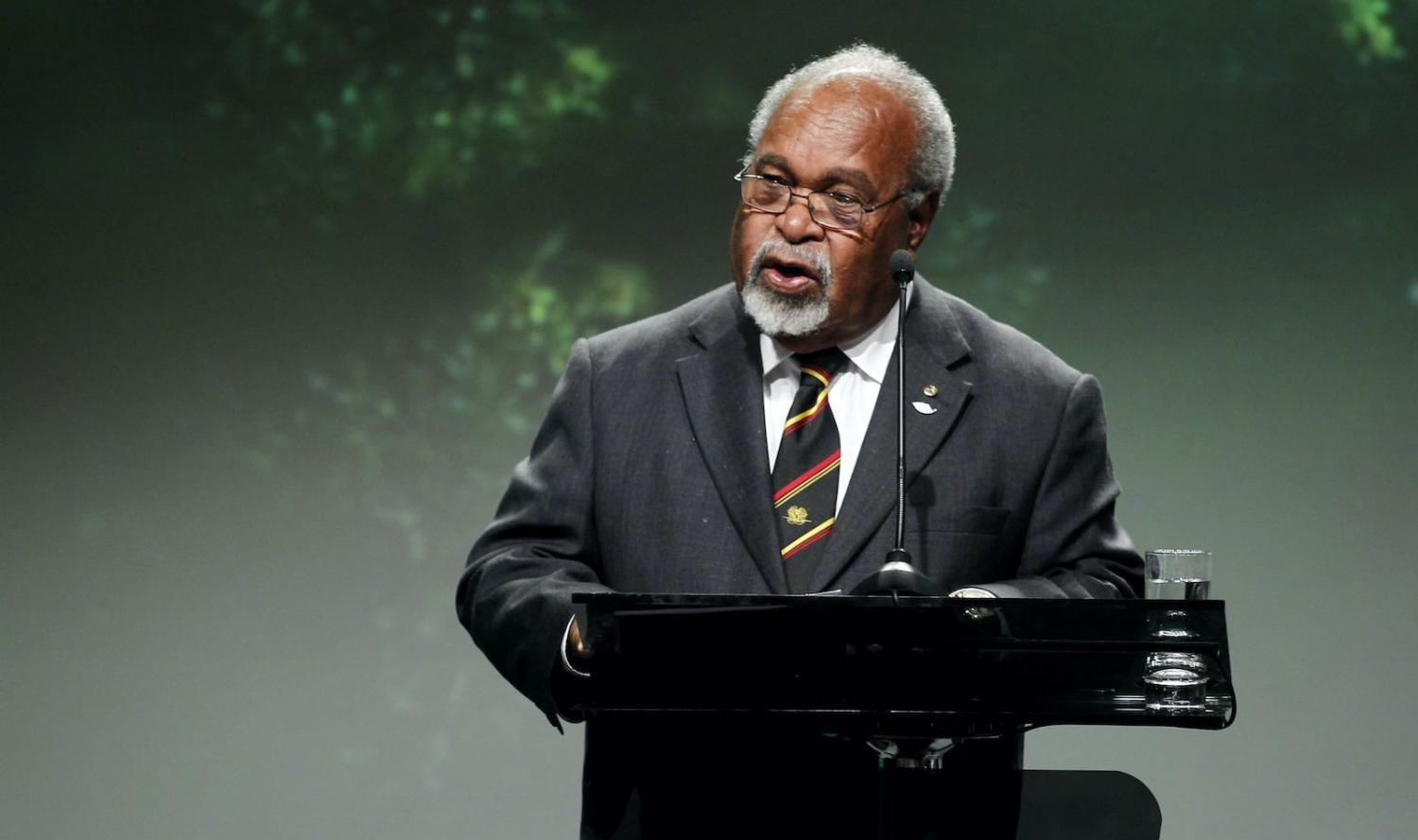 Grand Chief Sir Michael Somare led Papua New Guinea to independence, became the first prime minister of the newly sovereign nation, and served as head of government for 17 of its 45 independent years. More than that, Somare was the living symbol of the country’s fierce spirit of self-determination. His death marks the end of an era.

Somare was an instantly recognisable figure in Port Moresby when I was in my last years of primary school, growing up in what was then the Australian Territory of Papua New Guinea. I was not interested in politics at that age, but he was already a household name in PNG, and I was impressed by the image he projected as the vibrant and charismatic leader of the independence movement. I remember his bearded face being everywhere during the 1972 elections, smiling down from the PANGU party campaign posters. These were the elections that propelled him into the position of chief minister, and thus prime minister in waiting.

As his friend John Guise said at the September 1975 independence ceremony, “we are lowering the [Australian] flag, not tearing it down”. There may not have been a revolution, but Somare and his colleagues certainly had to struggle to win independence, wrestling a constitution into existence, winning the confidence of their own people, and convincing Australia to deliver. Somare was only in his 30s at that point, and his path to national leadership had been a remarkable one. He’d shown promise as a schoolboy and been selected to attend the national school at Sogeri near Port Moresby – a breeding ground for that first generation of leaders. He’d studied to be a magistrate, switched to journalism, and worked as a teacher. His English language proficiency had set him apart from many of his peers and led others to encourage him to enter politics.

Somare was a son of the Sepik – the northern region that is watered by the country’s longest river, and where art, literature and other cultural traditions run strong. His father, a hereditary chief of the region’s Murik clan, was serving as a police officer in the New Guinea islands when Michael was born in 1936. So he started life in Rabaul, and grew up speaking both the local Kuanua language and his parents’ Murik – as well as Tok Pisin, the country’s unifying language. He reflected later in life that this had been a distinct advantage.

One of our greatest and most urgent tasks is to forge a new national unity out of the multiplicity of cultures. In such a situation it is a distinct advantage to have been exposed to two cultures in one’s childhood … I grew up understanding that, in spite of so many superficial differences, there are many similarities among us.

The family was back in the Sepik by the time the Second World War came to PNG. Somare’s fond memories of this time were unsettling for those of us who take inspiration from the stories of comradeship between Papua New Guineans and Australians on the Kokoda Track. He reminisced about how the Japanese opened a school for the local children – it was not compulsory, but young Michael was game. He lapped up the opportunity to learn and enjoyed friendly cultural exchanges between the Japanese soldiers and the locals. The first gunfire he witnessed came from the returning Australians, and there was no Australian school to replace the Japanese one after one set of invaders had driven the other out.

Given this experience, it shouldn’t be surprising that governments led by Somare were inclined to be selective in their international dealings, asserting a right to take each external relationship on its merits, rather than always accepting Australia as the country’s only “natural” partner. We will see more of this as PNG comes more into focus in the strategic competition between China and the Western alliance. Australia actually has a lot to be confident about in its modern links with PNG, but the country’s current leaders can be expected sometimes to try to leverage Australia’s concern about China’s potentially malign influence to their advantage. Somare certainly did.

Somare found it more inspiring, though, to talk about the progress he believed PNG was making towards genuine economic independence.

It’s not that Somare was anti-Australian. He knew us and, in the main, he liked us. The best moment when I presented my credentials as High Commissioner to him in 2010 was when I asked him with mock earnestness who was going to win the Australian State of Origin competition that year. “New South Wales, obviously”, he answered, and he led his staff in chanting “Blues” for a while. In the early 1970s, he established a trusting relationship with Les Johnson, the last Australian administrator, and he was a good friend of several Australian prime ministers – particularly Gough Whitlam, who moved decisively to bring forward PNG’s independence. He was on more prickly terms with some of Whitlam’s successors – he and Sir Julius Chan, the country’s second prime minister, once provided me with an entertaining comparative analysis over dinner of all the Australian prime ministers they’d known. I’ll keep the details to myself.

Even at low points in the bilateral relationship, Somare showed appreciation for the ongoing support Australia provided through its major bilateral aid program. He found it more inspiring, though, to talk about the progress he believed PNG was making towards genuine economic independence. To his credit, the Somare government achieved an important step in this direction in 2009, landing the US$20 billion investment that launched the country’s LNG industry. This raised hopes that the country might soon be on a more secure footing. But the global economic winds have not been kind since then, his successors have not yet succeeded in bringing further significant projects on line, and weak national governance has prevented many of his people from sharing in the project’s success.

History will not overlook the failure of Somare and his generation to translate the country’s rich resources into genuine human development. Too few Papua New Guinean children complete school, too many women suffer domestic violence, and too many people die from preventable illness. Covid-19 is just another disease to add to the list. But we Australians need to be cautious in assigning all the responsibility for this. We should not rush to criticise a former colony or its leaders when we invested so little in the country’s future over the seven decades we were in charge. We do a good job in supporting PNG today, and the country’s current leaders, like Somare himself, would bridle at the notion that PNG is somehow our problem to “fix”. But we should take a more serious and empathetic interest in the struggles of our nearest neighbour and understand better that its success is our success – that its prosperity, and the broader stability of the region we inhabit, is in our own interests. Australia has skin in the game.

Somare’s greatest achievement was to become a unifying figure for a nation of a thousand tribes. He will do it again now. Papua New Guineans will set aside their differences, united in grief that the father of their nation has passed on, and in pride about what he symbolises for them.

Previous Article
Erasing memory in China’s Tibet
Next Article
How far would Australia go in defence of the rules-based order?

The lessons of history are many and few are simple. Empty threats can be just as damaging to a country’s reputation.
Graeme Smith 6 Mar 2019 14:00

Hail for the chief: loudspeakers return to China’s villages

Of all the Cultural Revolution hangovers, the return of Party cant via noisy “la ba” was the last thing expected.

Toward a stable Libya: Small steps rather than grand bargains

After the failure of grand bargains in the past six years, small, interim steps could be more likely to lead to a stable Libya.