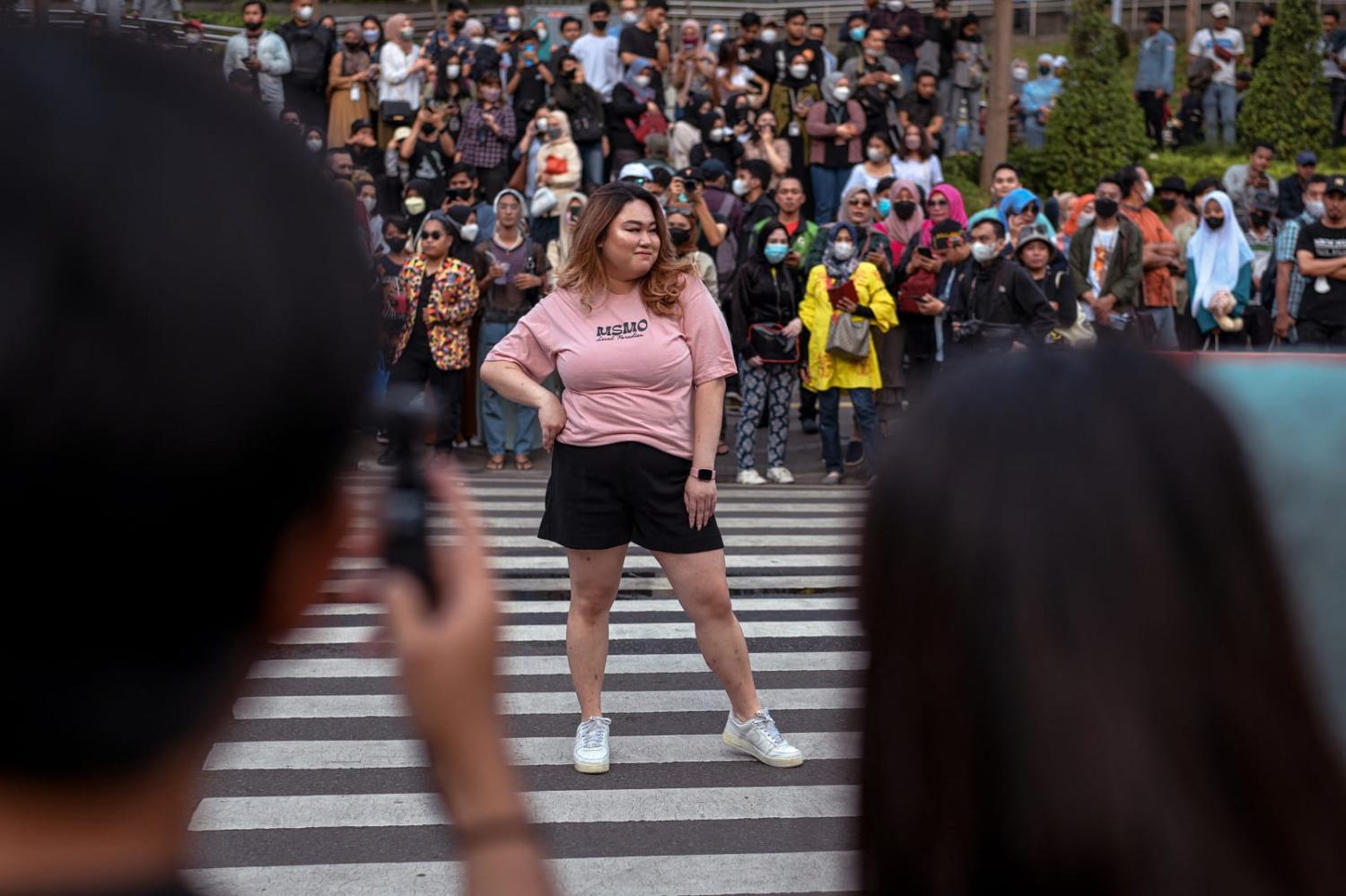 Citayam Fashion Week, a term that loosely refers to the spontaneous, outdoor gatherings of Indonesian youths in which they perform al fresco fashion shows, has caught the attention of the nation, including the country’s president, Joko Widodo. “As long as it’s positive, I don’t think there’s a problem with that. Let’s not make a big deal out of it. We support positive activities as long as they don’t violate the rules,” Jokowi said late last month.

It didn’t take long for Citayam Fashion Week to trend on social media and make headlines across the country.

The craze began when groups of teenagers from the village of Citayam in Bogor Regency started flocking to Sudirman Street in the capital Jakarta – a lively strip known for its food markets and outdoor dining. The phenomenon went viral on Indonesian social media, with people arguing that the teenage gatherings were a sign that youths craved open spaces where they could hang out and interact. The get-togethers eventually turned exclusively into street fashion shows, with the teens strutting their attire among the shoppers and diners on the pavements and zebra crossings. It didn’t take long for Citayam Fashion Week to trend on social media and make headlines across the country. The phenomenon has now become so popular that it has attracted people from all over Jakarta, with recent gatherings causing traffic congestion and forcing city police to temporarily restrict the events.

Looking at the motivations behind Citayam Fashion Week, it’s clear that Jakarta’s lack of open green spaces has created an opportunity for the capital’s young and creative types. Jakarta is home to dozens of malls and shopping centres, but severely lacks parklands and civic spaces. The city has 3131 green spaces, which may sound like a lot, but only accounts for around ten per cent of total land in the city – well below the requirement of 30 per cent stipulated in the prevailing Spatial Planning Law. Limited land availability, astronomical prices, and an absence of sanctions imposed by the Central government for regional governments’ failure to provide green spaces are part of the problem. As a result, residents are left with very few options for free entertainment, exercise or simply hanging out. For those who can afford it, they go to malls or cafés.

The popularity of Citayam Fashion Week, however, extends beyond this simple human desire to be outdoors.

The open green space in Sudirman Street has become a magnet for teens from the suburbs and nearby towns, with the green pavements becoming alternative recreation areas. The city has also built new parks and revamped old ones. The recently opened Tebet Eco Park in South Jakarta attracts huge numbers of residents, especially on weekends.

The popularity of Citayam Fashion Week, however, extends beyond this simple human desire to be outdoors. It has also been triggered by the fact that fame seems to be the dream of many young Indonesians these days. In this social media era, almost anyone stands a chance of becoming famous. With the use of platforms such as TikTok and Instagram increasingly prevalent among Indonesians, it’s never been easier.

In Indonesia, just like elsewhere in the world, the desire for fame appears to remain one of the most popular future goals among pre-teens, overshadowing hopes for financial success, personal achievement or a sense of community. Today, social media has made it possible for virtually anyone – regardless of their talent – to go viral. Indonesia is no stranger to these so-called “instant celebrities”. A police officer who lip-synced a dangdut song became an overnight sensation, but like most before and after him, was soon yesterday’s news. Similarly, Citayam Fashion Week has become a perfect channel for teenagers to fulfil their desire for instant fame.

However, there is a legacy that may outlast the ephemeral craze of these fashionistas strutting their stuff on the zebra crossings of Jakarta. It might just draw the government’s attention to the fact that it’s time to listen to the citizens of Indonesia’s cities and plan for future civic spaces that allow all its people to enjoy the great outdoors.

Indonesia lags in appointing women to key judicial posts and the gender gap in the region is closing at a glacial pace.
Oriana Skylar Mastro 27 Nov 2020 06:00

Many sectors in Indonesia where the countries are well matched - such as legal, audit, health and mining services - remain closed to foreign investment or are tightly controlled.