Fiji’s coalition of convenience: what’s next? 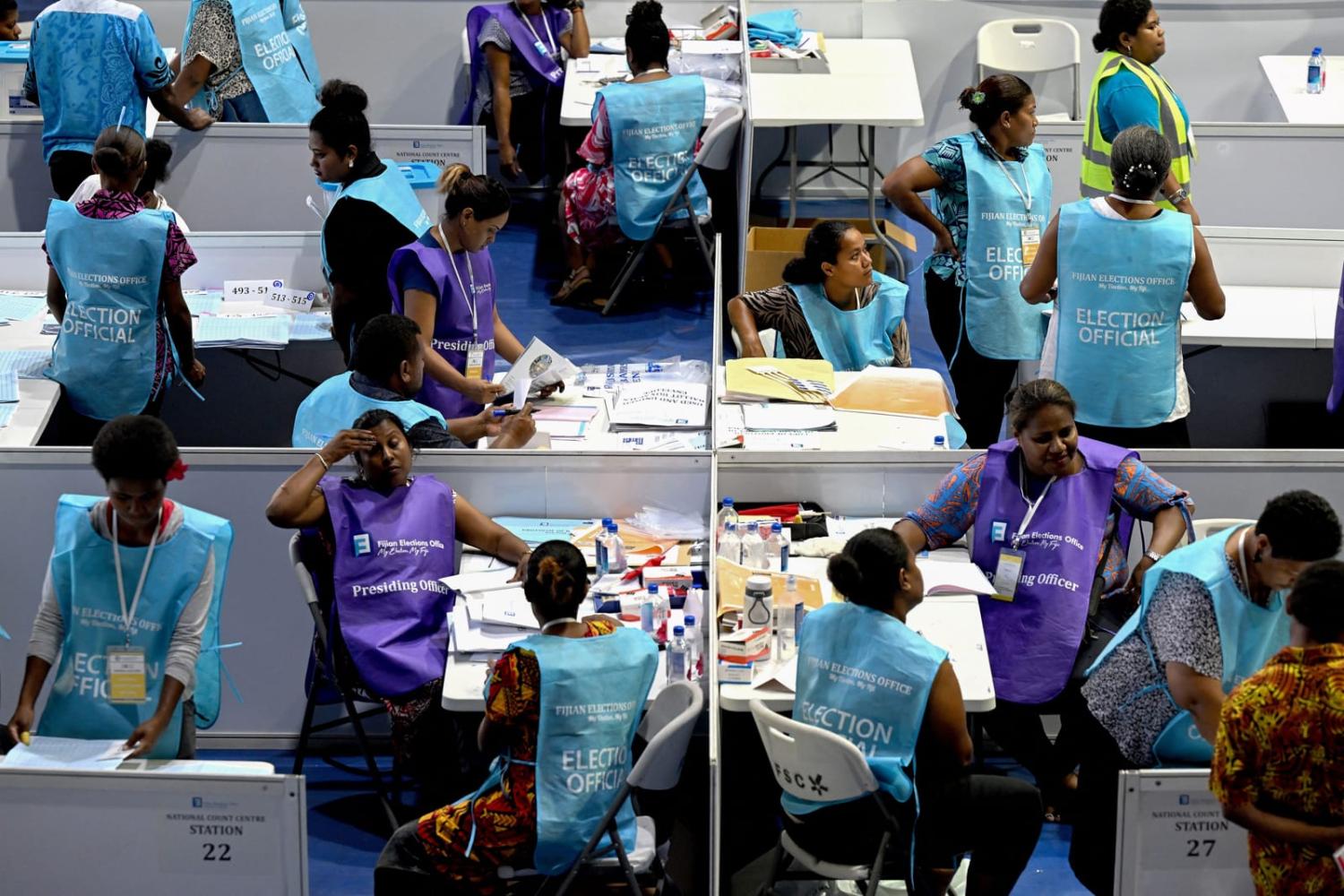 For Fijians reeling from the hardships of the Covid-19 lockdown and the extreme weather events of the last two years, the election added one more exhausting and stressful event to the 2022 calendar. The key theme of the campaign, oft repeated, was time for change – the ruling party, Fiji First, claimed it was achieving change through policy, investment and constitutional reform; the alternative parties vying for power, led by the People’s Alliance Party (PAP), claimed they would bring a different type of change to strengthen indigenous governance, education and livelihoods.

The upshot from a result that delivered no clear winner appears to be a coalition. The kingmaker, the Social Democratic Liberal Party (SODELPA), is biding its time and considering who will offer them the best deal. Parliament needs to form within 14 days of the results being announced – SODELPA has said they will not be rushed and have until 1 January.

Prior to the results, the SODELPA President appeared to give Fiji First his support. That coalition would be challenging. Fiji First promised investments to boost the economy, infrastructure and governance for all – with no special treatment for indigenous people or Christians. SODELPA’s agenda has a strong focus on indigenous land and economic rights, the re-instatement of the Great Council of Chiefs disbanded by Fiji First, low-cost education and Christian values. Fiji First would need to make concessions to win SODELPA’s support and enable it to deliver on campaign promises.

Most voters are worried about the “bread and butter” issues, such as the skyrocketing cost of living, lost livelihoods, and fragile supply chains.

There is also history to navigate. Many have not forgotten the 2006 coup led by the current Prime Minister Frank Bainimarama that removed the then SDL government (the former SODELPA) and its then prime minister Laisenia Qarase. Bainimarama claimed his coup and policies reduced racism, but many feel they challenged Fijian identity and indigenous rights, and undermined democracy. His highly centralised government, with electoral reforms to strengthen party rule rather than electorate representation, raises concerns among Fijians who closely associate with their kin and land (Fiji now has just one open electorate). SODELPA has promised to re-instate provincial councils.

The alternative coalition between SODELPA and PAP-National Fiji Party (NFP) would appear on the surface to be the easier policy fit. But the decision two years ago by Sitiveni Rabuka to leave SODELPA and form a new party, PAP – ultimately taking eight members from SODELPA and securing the lion’s share of votes – makes negotiating that alliance challenging. One commentator likened it to asking your ex to take you back.

Beyond politics, there is the economy. Fiji’s economy was one of the hardest hit in the Pacific sub-region. Most voters are worried about the “bread and butter” issues, such as the skyrocketing cost of living, lost livelihoods, and fragile supply chains essential to securing life’s basics – food, energy and consumer goods. Fiji is now making a strong rebound, but there are risks to the tourism-led recovery, not least inflation, debt and extreme climatic events. The positive trajectory could quickly change. Fiji needs good economic management and development partners to swing in behind it.

China and its influence remain a touch point for Western countries.

The coalition resulting from Fiji’s election may not be what some wanted, but the reality is that Australia and all other donors can work well with either coalition outcome. There were glitches in the election, but overall the Multinational Observer Group (MOG) assessed it to be free; a final report will be out early next year. There will likely be petitions and protests, but that is for the Fijian courts to resolve. The international community will get a government with which to work, and hopefully a stable one.

The focus of either coalition government will be on Covid recovery and maintaining strong donor relations. Prior to the election, Bainimarama and the international community were on relatively good terms. He assisted with resolving regional tensions associated with the Pacific Islands Forum, helped secure the American broad-ranging partnership, and led on key issues related to climate change and oceans. There is no evidence to suggest a Rabuka-led government would not also work well with donors; he’ll likely be more domestically than internationally focused.

China and its influence remain a touch point for Western countries. Geopolitical competition has no end in sight. SODELPA’s leader Viliame Govoka has been clear that his party wishes to remain closely aligned with traditional partners and that no China security pact, similar to the one China has with Solomon Islands, is on the cards. This sentiment has been reinforced in one form or another by key leaders of Fiji First and PAP. But both possible leaders will continue to use geopolitical competition as a leverage point for aid and investment.

Domestically, the challenges will be great. Should SODELPA feel its commitment to economic and land interests of the indigenous community are not respected, the party could support a motion of no confidence and play kingmaker again by joining the opposition. If the coalition is with Fiji First, Bainimarama and his deputy Sayed Khaiyum will need to be flexible and responsive, especially to indigenous concerns. This has not been their forté in the past. A coalition with PAP-NFP would have to resolve differences more successfully than the recent past that led to the SODELPA split.

Coalition governments can boost accountability and achieve sustained success, but stability depends on respect, listening and compromise – that can be tough over a four-year term in office and economic storms on the horizon.

Previous Article
Zelenskyy: when the “Lion of Kyiv” addressed the Lowy Institute
Next Article
Covid-19: from crisis to closure?

Smartphone technology hold the greatest promises in outpacing the virus, but surrendering to surveillance has a price.
Daniel Flitton 8 Nov 2022 12:30

The demands on leaders in global diplomacy have only grown but that hasn’t made negotiations more meaningful.
Sam Roggeveen 19 Dec 2018 16:00

There has been a clear shift in US thinking regarding China's long term trajectory.