Zelenskyy: when the “Lion of Kyiv” addressed the Lowy Institute

The anatomy of an interview with a wartime president. 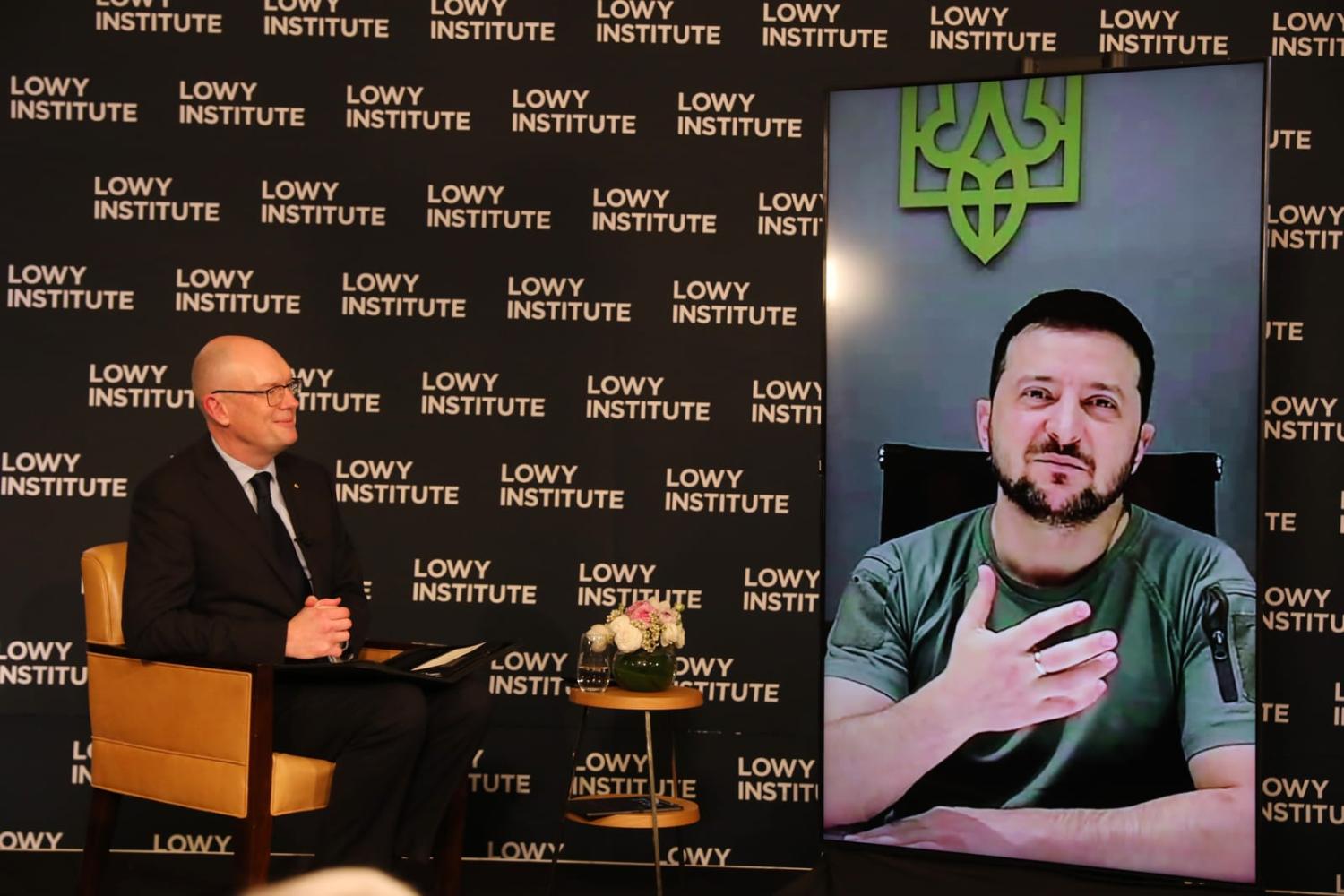 But our most memorable guest was the President of Ukraine, Volodymyr Zelenskyy.

I have marvelled this year at the physical and moral bravery displayed by the Ukrainian people in defence of their homeland. And I admire the President’s own courage, revealed in that famous quote attributed to him at the start of the invasion when he was offered safe passage out of Kyiv: “I don’t need a ride, I need ammo.”

In August last year, Afghanistan’s president Ashraf Ghani opted for a ride. Shortly afterwards, his country’s military succumbed to the Taliban. If Zelenskyy had fled Ukraine, things would be very different today.

Today, to be Ukrainian is to be courageous, charismatic – and clever. Zelenskyy is the incarnation of these qualities.

Over the course of the year, I reached out unsuccessfully to Kyiv several times, through various intermediaries, to invite the President to address the Institute. But at the National Press Club in June, just after the Russian state paid me the high compliment of blacklisting me for my criticisms of its behaviour in Ukraine, I met the lively new Ukrainian ambassador to Australia, Vasyl Myroshnychenko. The two of us began conspiring to host Zelenskyy at the Institute. In September, after a couple of false starts, Kyiv confirmed the President’s participation in a video address followed by a question-and-answer session.

The Institute’s operations team and I had practice sessions with the technicians in Kyiv, and we were always impressed by their good humour and professionalism.

On 6 October, before a small but high-powered audience at 31 Bligh Street, we heard from the Lion of Kyiv.

Zelenskyy is a master communicator. His ability to adjust his message to suit each audience is often remarked upon. We witnessed this ourselves. The President began his speech by quoting German Chancellor Angela Merkel’s 2014 Lowy Lecture, in which she said, “the Ukrainian crisis is really more than a regional crisis, it affects all of us”.

After the event, I asked my Institute colleagues if we had sent a copy of Merkel’s speech to Kyiv. The answer was no. Myroshnychenko confirmed that the embassy had not sent it over either. So somewhere in the presidential compound in Kyiv, with Russian missiles raining down around their heads, advisers had spent time searching the Lowy Institute’s website for the perfect line for the President to quote.

This is a level of attention to detail that you rarely get from Number 10 or even from the White House.

It is the same professionalism we have seen in the feats of Ukrainian defenders on the battlefield. No wonder Ukraine has altered its international reputation so completely this year. Today, to be Ukrainian is to be courageous, charismatic – and clever.

Zelenskyy is the incarnation of these qualities. As I told him in October, I look forward to the day when he can visit the Lowy Institute in person to tell us how Ukraine won the war.

The risk of disrupted energy supplies is not only in Europe but a danger in the Indo-Pacific, too.
Bec Strating 5 Sep 2017 12:32

An expedient negotiated settlement with Australia was in the interests of oil-dependent Timor-Leste.
Alexandre Dayant 20 May 2020 11:00