After a first smooth change of power, forging consensus in a nation renowned for ethnic tension poses a continued test. 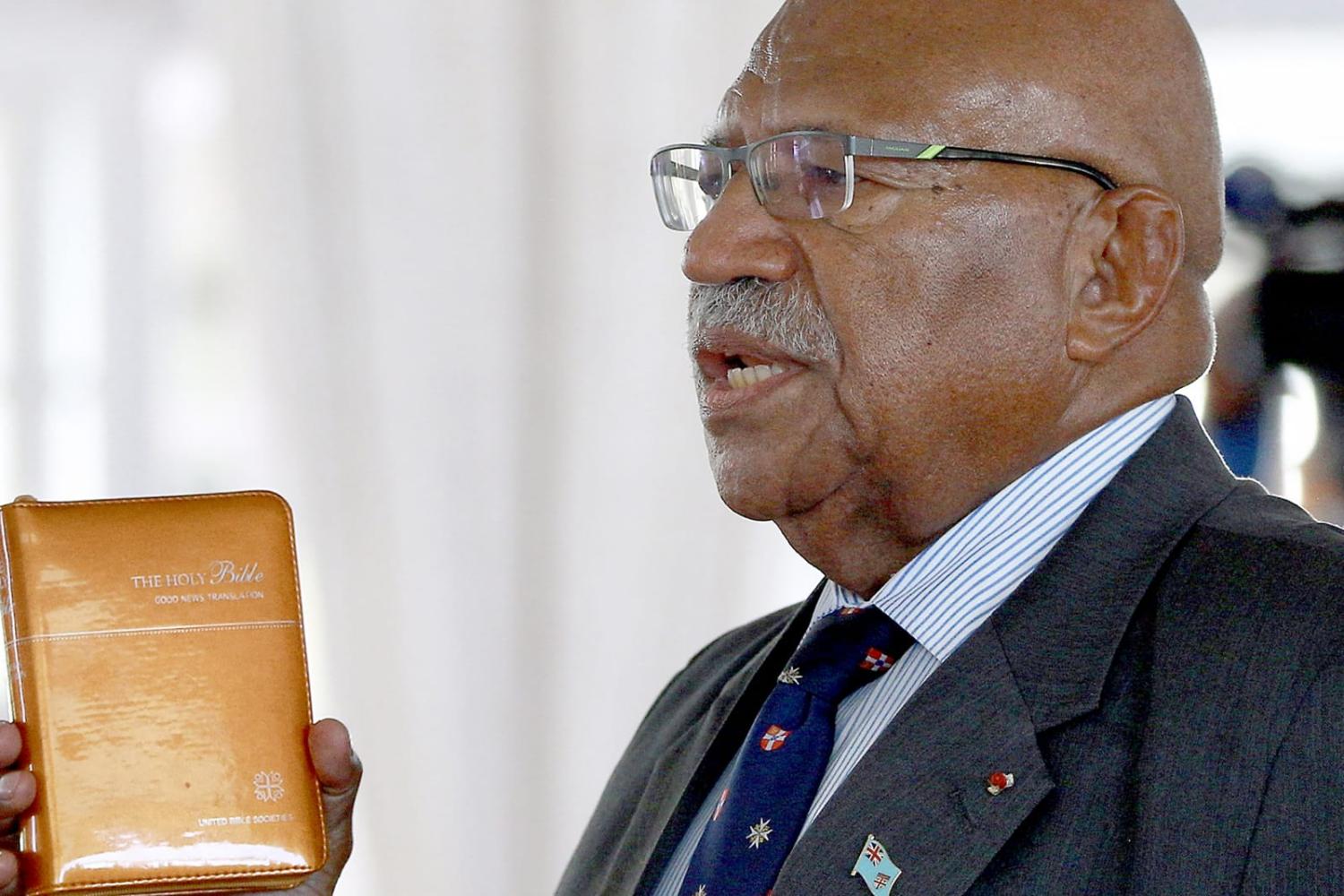 Fiji’s 14 December 2022 election will go down as a momentous occasion in the nation’s history – including for potential impacts on Suva’s diplomatic ties with Pacific partners.

Immediate tasks identified by new Prime Minister Sitiveni Rabuka’s tripartite coalition include the revival of the pandemic-scarred economy, the re-examination of foreign relations, and the restoration of democratic institutions, which never quite recovered from the battering of the 2006 coup.

The election ended the 16-year reign of the FijiFirst Government headed by Frank Bainimarama, the country’s larger-than-life figure after seizing power in 2006, before winning elections in 2014 and 2018. Bainimarama’s military background coupled with Fiji’s “coup culture” had raised concerns about a smooth transfer of power amid fears about the military being called to assist police. For two weeks after the new government was finally sworn-in on Christmas Eve on a slim, three seat majority in the 55-member house, the country was on edge as tensions between the former and successor governments intensified.

Bainimarama’s actions suggested that he would not leave quietly. Not only did Bainimarama fail to concede, he did not bother to congratulate the new prime minister, as per democratic tradition. To the contrary, Bainimarama upped the ante with belligerent media statements claiming the ruling coalition was engaging in “repressive conduct”, attacking the values and principles of the 2013 constitution, and that the country was “reliving the dark ages”.

While Australia is the largest development partner in the region, China remains an important actor in Fiji and the Pacific.

This was met with a sharp rebuke from Rabuka, who accused Bainimarama of bombarding the country with lies and trying to create racial disharmony alongside former attorney-general Aiyaz Sayed-Khaiyum. Police confirmed receiving a complaint against Bainimarama for “inciteful” statements, with a border alert issued for Sayed-Khaiyum should he return to Fiji for allegedly “inciting communal antagonism”. It was a remarkable turn of events for what had been the two most powerful men in the FijiFirst Government, which had ruled with an iron grip yet could only secure 42.5 per cent of the vote in December.

The government diffused a potentially risky situation, and despite a stand-off over the role of the police chief, seems to be in control so far.

The actions of military commander Major General Jone Kalouniwai have been crucial. In an address at the military’s end-of-year parade just a week before the elections, Kalaouniwai had ordered his troops to honour the democratic process and respect the wishes of voters. Kalaouniwai’s pledge is significant in light of the description of Fiji by longstanding Pacific academic Stewart Firth as a democracy by military permission. This was in reference to Fiji’s 2013 constitution mandating that “It shall be the overall responsibility of the Republic of Fiji Military Forces to ensure at all times the security, defence and well-being of Fiji and all Fijians”. Firth calls this provision a “capacious definition of the military’s role that could easily be invoked to justify another coup”. In 2017, the Economist Intelligence Unit categorised Fiji as a “hybrid regime”, while the 2022 Freedom House report rated Fiji only as “partly free”.

Should the new government remain cohesive and the present situation prevail, it will mark Fiji’s first smooth transition of power. Rabuka staged the first two pro-indigenous Fijian coups in 1987 against perceived Indo-Fijian dominance. During his prime ministership from 1992–99, the former military commander had a change of heart and adopted a multiracial stance by forging a partnership with the late National Federation Party (NFP) leader Jai Ram Reddy to usher in the more equitable 1997 constitution, only to be rejected at the 1999 polls.

For Rabuka, re-claiming government is a vindication of his partnership with the NFP and its current leader, Deputy Prime Minister Biman Prasad. In his pre-election campaign Rabuka stressed the importance of social harmony in a country with “so many races, so many religions”. Rabuka’s multiracial credentials in this ethnically tense country will be put to the test during his term.

The new government’s 100-day “first order of business” emphasises not just the economy, but democracy and human rights. A pledge to ensure “separation of powers” in crucial institutions such as the judiciary, “strengthen human rights”, and review the draconian 2010 Media Industry Development Act will be welcomed by international partners such as the United States, which is assembling a “community of democracies” to counter growing authoritarianism.

How the government handles its diplomatic relationships will be the focus of regional attention. Whereas the Bainimarama government enjoyed close relations with China, all three leaders of the coalition government have stated that they preferred to align with countries with democratic traditions. While campaigning, Rabuka indicated that his government would forge closer ties with Fiji’s traditional partners, Australia and New Zealand, while distancing from China. But in a subsequent interview with the ABC in his first week in office, he changed tone, chiding Australia and the United States for their “colonial” mindset while praising China for seeing “us as just development partners”.

While Australia is the largest development partner in the region, China remains an important actor in Fiji and the Pacific – a reliable source of development finance and aid, a market for the Pacific’s resources sector, including fisheries, and a growing source of tourists. Given its unprecedented debt challenges in the wake of the pandemic, Fiji is unlikely to scorn any source of development funds. At a “New Approaches to Economic Progress” panel discussion in Suva last week, Prasad, who also holds the finance portfolio, stated that the “task ahead of us is huge” and announced the forthcoming budget to be released in about six months will target job creation, the high cost of living and investor confidence.

Prasad emphasised that ultimately Fiji’s progress hinges on social cohesion and political stability. Building consensus on major policy issues, equitable sharing of economic benefits, keeping the coalition intact and preventing the collapse of government will be the key challenges.

The first significant pro–New Zealand legislation since the Senate ratified the ANZUS treaty in 1951 has been passed.
Dick Grant 17 Apr 2020 10:00

Morale remains good, but the bigger challenge is beyond the borders, seeking a glimpse of international cooperation.
Sue Ahearn 6 Dec 2021 12:00

The coverage of the latest crisis was a showcase of Solomon Islands journalists telling the story of their own country.