A pragmatic proponent of “radical democracy”, Boric ties to international change with careful statements at home. 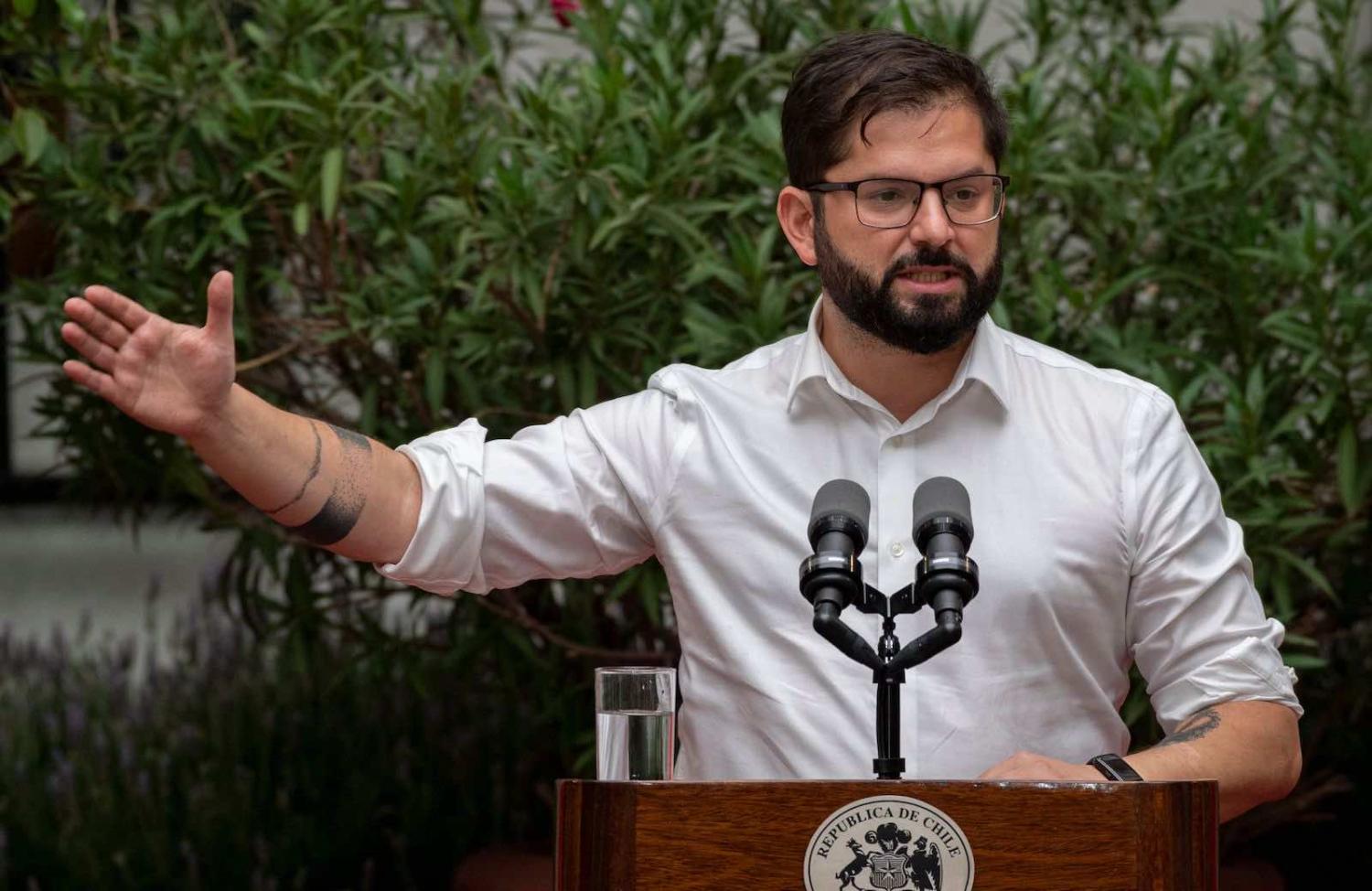 Last Friday, on 11 March, the world’s first millennial president was sworn in – Gabriel Boric. A leftist of 36 years of age, he will govern Chile until 2026. He is the youngest president and received the highest vote in Chile’s history. Boric was also one of the first left-wing leaders to condemn the Russian invasion of Ukraine.

At Friday’s stiff oath-taking ceremony, Boric didn’t wear a tie. He never wears ties. He only owns one – an Australian aboriginal made tie, a gift from singer and activist Joan Baez. Environmental themes are displayed in Boric’s four visible tattoos – they were inspired by the landscape of his birthplace, Punta Arenas – the world’s most southern region.

The presidential sash Boric wore on his inauguration was made by sawists of Chile’s Textile Revolutionary Union. The women had met Boric in the streets of Santiago during the 2019 social explosion – a transformative citizens’ uprising where women played a central role.

Women became the most significant factor in Boric’s presidential triumph last December.  Now women are key figures in his government – a “feminist government,” as has been described. With 14 out of 24 female-led ministries, women are heading some of the most influential portfolios.

Izkia Siches became the first minister of the Interior and Public Security in the country’s history. She is Boric’s chief of staff. In a massive statement to Chile’s armed force, Boric appointed Maya Fernández Allende as the Minister of Defence. Fernández Allende is the granddaughter of former President Salvador Allende, the democratically elected Socialist president overthrown by a military coup in 1973.

Boric nominated Camila Vallejo as Minister General Secretariat of Government. Vallejo, the charismatic member of the Communist Party, is a close political ally and confidant of the new Chilean president. In 2012, I bumped into Vallejo on one of the main thoroughfares of downtown Santiago. It was 16 May, during the students’ movements of 2011–12. Next to Vallejo was a then dishevelled and bushy Gabriel Boric. He was the president of the powerful Student’s Federation of Chile.

Boric’s fellow student travellers were on the streets too – Karol Cariola, now a congresswoman and Giorgio Jackson, today Boric’s Secretary-General. The four young student leaders marched under a banner of “Free and quality education”.

Boric is the face of the new Latin America left. He has criticised electoral fraud in Nicaragua and human rights abuses in Venezuela. His criticism has not pleased the ears of authoritarian left-wing leaders such as Venezuela’s Nicolas Maduro. He described Boric as part of the region’s “cowardly left”.

Boric’s programmatic platform resembles the ones proposed by US congresswoman and activist Alexandria Ocasio-Cortez and former Brazilian President “Lula” da Silva – advocating for a compassionate role for the state towards its citizens.

Ideologically, he sympathises with the themes of “radical democracy” developed by the post-Marxist theorists Argentina’s Ernesto Laclau and Belgium’s Chantal Mouffe. Boric maintains a long-standing and close political relationship with the Spanish left – with the leaders of Podemos. He has personal ties to Pablo Iglesias and Íñigo Errejón.

He is pragmatic. Boric knows that Chile needs economic stability. He appointed Mario Marcel, a social democrat, to the Minister of Finance. Martel is a symbol of fiscal responsibility. His appointment brought relief in the markets and from the country’s conservative financial sector.

Boric’s programmatic platform resembles the ones proposed by US congresswoman and activist Alexandria Ocasio-Cortez, former Brazilian President “Lula” da Silva, and José “Pepe” Mujica – the former left-wing Uruguayan president. They advocate for a compassionate role for the state towards its citizens.

During the 1973–1989 military dictatorship, Chile became the experimental laboratory of neoliberalism, an economic system that transformed Chile into one of the world’s most unequal countries. Under Boric, Chilean neoliberalism is gasping its last breath. “If Chile were the cradle of neoliberalism in Latin America, it would also be its grave,” he said during the electoral campaign.

Fundamentally, Boric’s ideological and programmatic platform pursues the achievement of a socialist, democratic, libertarian and feminist society. Boric advocates a welfare model similar to the European one. He pledged to raise taxes on the wealthy. He has proposed an ambitious tax reform to collect up to 5% of GDP in four years and replace the current private pension scheme left in place by the military dictatorship of Pinochet.

Boric is the first Chilean president who is not part of the two traditional centre blocs that have led Chile since the return to democracy in 1990. He belongs to the “generation without fear” – the ones who learned about the dictatorship from their parents, books or school.

Boric is an avid reader of poetry, fiction, essays and Camus. His Twitter account paraphrases Camus’ Chronicles: “Doubt must follow conviction like a shadow.” And it is because of his doubts, conviction, and pragmatism; Boric won’t rush to make the significant and numerous changes Chileans are demanding. The changes will be “slow,” he said in his presidential first speech on 11 March, “because we want to go far”.

As Trump himself has conceded, it would be hard to change or walk away from on a deal that has been approved in a Security Council resolution.
Henry Storey 20 Aug 2021 06:00

Deals, denials and grand bargains on the road to the COP26 climate change conference.
Matthew Dal Santo 10 May 2017 14:01