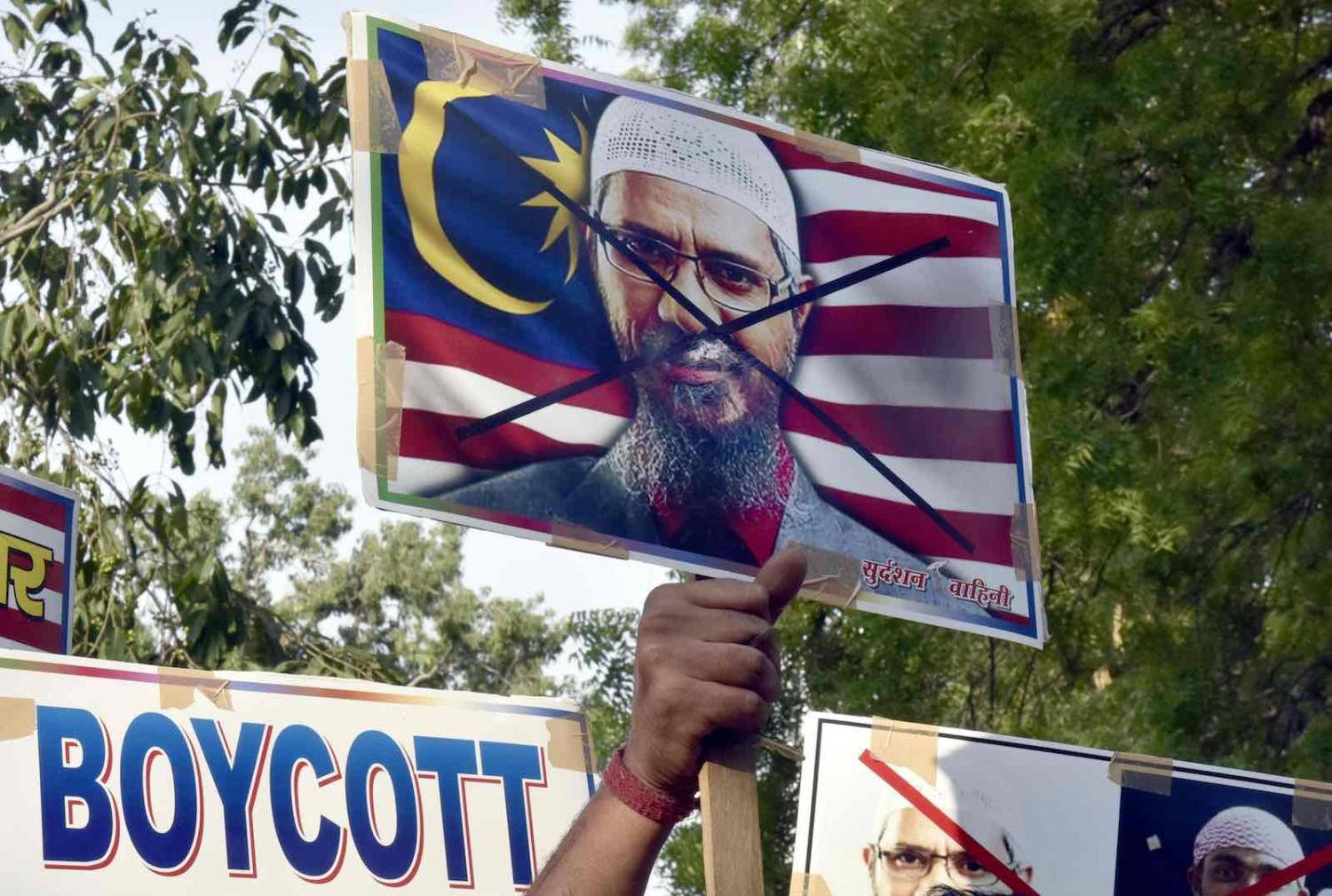 Zakir Naik is an Indian preacher of Islam who currently calls Malaysia home. Described by the Washington Post as a “rock star of tele-evangelism”, he is also a fugitive, having evaded law enforcement in his home country of India since July 2016, when he fled the country within hours of bombers from neighbouring Bangladesh allegedly citing ideological influence from his YouTube videos.

A proponent of austere Salafi Islam, Naik has a long history of provocative rhetoric, including claims that “every Muslim should be a terrorist” and that suicide bombings are a legitimate weapon in war. He has expressed support for the death penalty for apostasy and the belief that Muslim-majority countries shouldn’t allow other religions to build houses of worship.

His television channel, named “Peace TV”, has been banned in India, Bangladesh, and (soon after the 2019 Easter bombings) Sri Lanka. Zahran Hashim, the alleged mastermind of the Sri Lanka attacks, once posted a video for his YouTube followers asking Sri Lankan Muslims what they could do for the celebrity preacher. Naik’s so-called Islamic Research Foundation was banned in 2016 under India’s anti-terror laws for “extolling Osama Bin Laden’s views”. He was charged in absentia in May this year for money laundering, accused of acquiring US$28 million worth of criminal assets.

A petition to deport him has attracted 120,000 signatures. Malaysia’s National Police subsequently banned Naik from speaking publicly in the country, stating it was “in the interest of national security and to preserve racial harmony”.

While many governments in Asia treat Naik with suspicion, Malaysia has given him the red-carpet treatment. Naik has been granted permanent residency status and has attracted crowds of tens of thousands on speaking tours around the Muslim-majority country.

During a sermon to a large audience in the ultraconservative state of Kelantan in early August, Naik questioned the loyalty of Malaysia’s ethnic and religious minorities. He referred to ethnic Chinese Malaysians – many of whose ancestors have lived in Malaya since the early 19th century and constitute around a quarter of the country’s population – as “guests”.

“They weren’t born here. If you want the ‘new guests’ to go first, ask the ‘old guests’ to go back,” he declared, responding to criticism from community groups and ethnic minority lawmakers that he should return to India. And it’s not only Chinese Malaysians in Naik’s crosshairs. He also claimed Hindu Indian Malaysians receive “100 times” more rights than Muslims in India – “so much so that they support the Prime Minister of India but not the Prime Minister of Malaysia” – a statement Naik says has been taken out of context.

The preacher has been widely criticised by politicians and public commentators. A petition to deport him has attracted 120,000 signatures. Malaysia’s National Police subsequently banned Naik from speaking publicly in the country, stating it was “in the interest of national security and to preserve racial harmony”.

“An attack against our Chinese and Indian brothers and sisters is an attack against all Malaysians. It is ridiculous to even think that my fellow Malaysians are my guests,” Saddiq told Malaysian journalists in a WhatsApp group message. “They are my family, for god’s sake. Enough is enough.”

Barely a week later, however, Saddiq had undergone a change of heart. Hosting Naik for a meal at his house, the minister tweeted, “Nobody is free from mistakes … Let’s move on. The country needs healing!”

“Malaysia is a multi-racial and multi-religious country. Moderation over extremism. Our unity is our strength,” Saddiq added.

The actions of the minister, who is close to the PM, appear to be an accurate reflection of the mood in cabinet. Asked about his opinion on Naik’s remarks, Mahathir claimed that the preacher faces being “killed” if returned to India. “So he is here today, but if any country wants to have him, they are welcome to do so,” the PM said.

In an open letter to Mahathir, Indian Malaysian columnist Ravinder Singh wrote recently that “[Naik’s] latest attack on Malaysian Indians and Chinese is a direct result of your blind stand that you will not deport him.” As Interpol’s secretary general Jurgen Stock visited Delhi last week, Indian officials pressed him to release a Red Notice arrest warrant for Naik.

But as Naik said recently: “The Prime Minister of India wants me. The Prime Minister of Malaysia does not want injustice to be done to me.” Speaking to a crowd of 100,000 in the Kelantanese capital of Kota Bahru on August 10, Naik heaped praise on Mahathir as defending the interests of Muslims worldwide.

As Malaysia forcibly repatriated a family of Turkish nationals last week – a decision criticised by the UN Refugee Agency as potentially in breach of international law – critics  drew comparison to Putrajaya’s decision to allow Naik to stay. A further 160,000 asylum seekers and refugees reside in Malaysia, who unlike Naik do not have access to the rights granted by permanent residency. But Mahathir has dismissed the notion his government is imposing a double standard.

Many see the PM’s tacit support of Naik’s presence in Malaysia as undermining his “Pact of Hope” government’s commitment to progressive values and pluralism, upon which they were elected. It also provides a clear picture of the enduring strength of far-right political Islam and the Malay-dominated status quo – even in the renewed democracy of “new Malaysia”.

Previous Article
Pressure upon pressure builds around Kashmir
Next Article
Mekong: When the river runs dry

Mahathir Mohamad might be back on the campaign trail in opposition but this doesn’t appear to be an obstacle to the present government.
Max Walden 24 Sep 2018 06:00

After years of official limits, a healthy democracy in Malaysia needs to give students the space to discuss politics.