In his brief time as president, BJ Habibie enacted economic and democratic reforms that endure to this day. 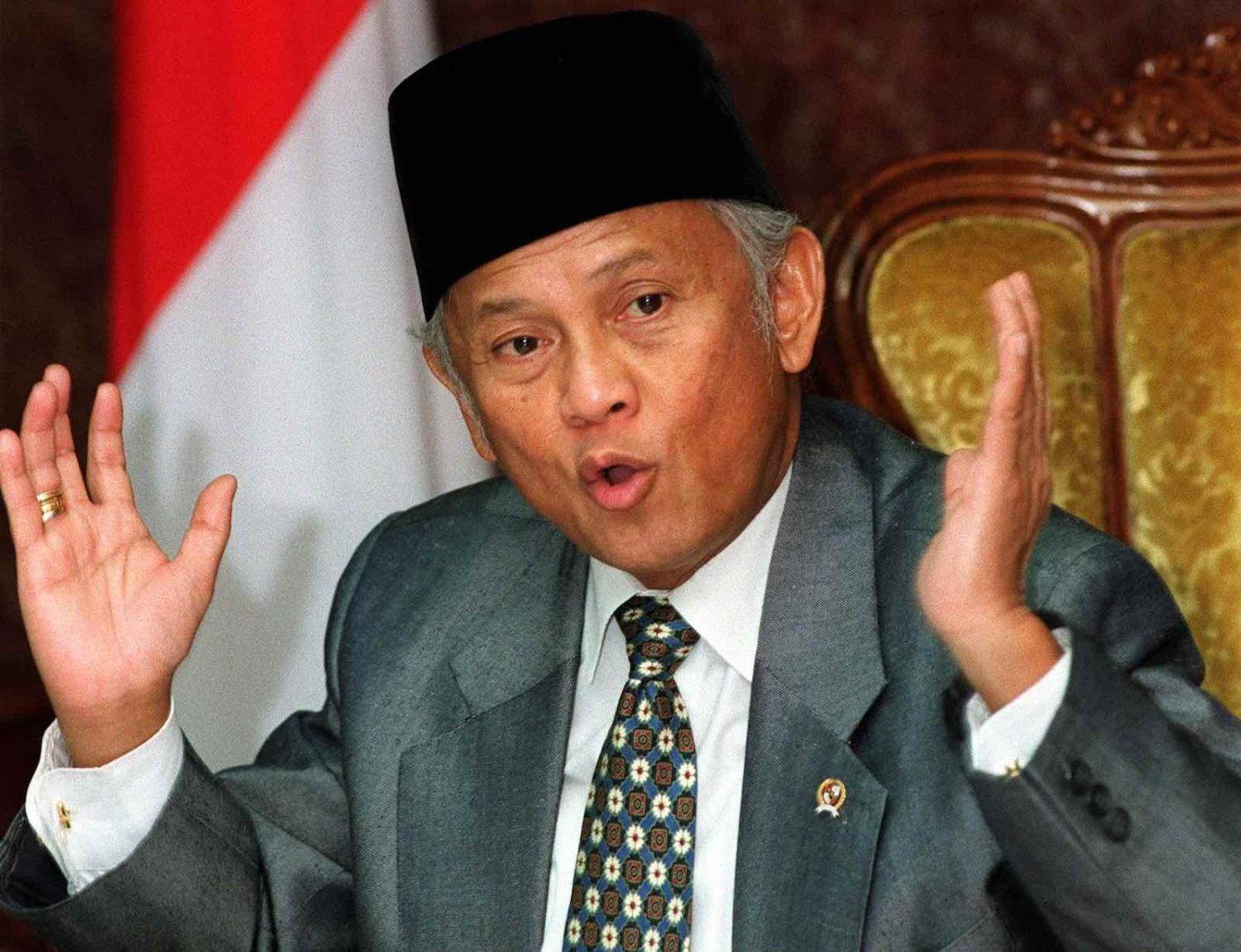 Bacharuddin Jusuf “BJ” Habibie, third president of the Republic of Indonesia, passed away on 11 September in Jakarta. After serving as vice president under Suharto, Habibie succeeded him when political and economic crisis forced the president of three decades to resign in May 1998.

Although it lasted only 17 months, Habibie’s presidency was transformational. Before entering politics, Habibie had been a prominent aviation engineer educated in Germany and the Netherlands. Serving in the research and technology ministry in the early days of Suharto’s New Order regime, Habibie was known more for his skill in aircraft building and other high-tech industries than for his political agenda.

But today he is widely credited with the democratisation of Indonesia after the Suharto era, overseeing Indonesia’s first democratic legislative elections in 1999, and broadening freedom of speech. His democratic principles also led him to allow East Timor, now known as Timor-Leste, to vote on a referendum for autonomous status within Indonesia or outright independence.

He laid a strong foundation for Indonesia to continue evolving into an advanced country. His thinking was way ahead his time, and made an invaluable contribution to even the current development challenges facing the country.

He kick-started reforms that helped the economy recover from the 1997 Asian financial crisis and put Indonesia on the path to becoming the biggest democracy in the world. The economic reforms he established are still in effect today.

Despite much scepticism towards his economic capability, Habibie successfully led Indonesia out of the shocks of economic turmoil caused by the Asian financial crisis. Habibie understood that by 1998 Indonesia’s economic problems had become a crisis of trust, and not just the fault of neighbouring countries. He saw winning back investor confidence as the most critical issue.

Immediately after taking office as President, Habibie took steps to resolve the banking sector problem through a restructuring strategy, first by merging four state-owned banks, which then gave birth to Bank Mandiri, one of the biggest banks in Indonesia. He also established an independent central bank by separating Bank Indonesia from the government, so that Bank Indonesia would no longer be governed or pressured by the executive.

With the aim of restoring investor confidence, Habibie established the Indonesian Bank Restructuring Agency (IBRA), the State Asset Management Unit, and the Monitoring and Settlement Agency for foreign debt issue. Habibie also enacted policies to strengthen the national economy, including the Monopolistic Practices and Unfair Competition Law, Consumer Protection Law, the Political Party Act, and the Regional Autonomy Law, which collectively brought back political and economic stability, resulting in an increased influx of foreign investments and strengthening of the local currency.

A year into Habibie’s presidency, Indonesia’s economic growth had slowly improved. The country experienced 13.1% negative growth in 1998 and only a year later the economy grew positively by 0.8%, a sign that the crisis was coming to an end.

Fiscal decentralisation – and the local democratisation it enabled – was among the Habibie administration’s most noteworthy achievements, a long-overdue initiative, given Indonesia’s diverse population, geographical complexity, and uneven economic development across provinces. The two laws on political and fiscal decentralisation Habibie enacted in May 1999 – which promoted government response to local concerns, increased accountability, and strengthened governance – entirely changed the relationship between central and regional government.

Habibie’s love for technology clearly informed his approach towards economic strategy. “Habibienomics” was based on the belief that the added value of technology would support economic growth. During his time as Minister of Research and Technology, Habibie demonstrated his forward thinking in adopting research and technology for industrial purposes,  and he aspired to build the quality of Indonesian human capital, envisioning the leap from an agrarian state to an industrialised country. Thus, he sent many young Indonesians overseas to study, and he initiated state-owned enterprises in advanced technology, such as aircraft, ships, communication equipment, and weaponry. It under the guidance of Habibie that Indonesia succeeded in manufacturing its own aircraft.

Years later, amid the rapid growth of globalisation, Habibie’s vision is still relevant. To survive, Indonesia needs to focus more on human capital, innovation, and productivity, as they fuel economic development. The country still lacks in innovation, especially in research and development activities, according to the Global Competitiveness Index 2018 – Indonesia spends less than 0.1% of GDP on research and development, ranking 112nd among 140 countries.

Current President Joko Widodo has set out the Indonesian Vision for his second term, promising to make the country a more productive and competitive nation by putting investment in human capital as the highest priority. Finance Minister Sri Mulyani Indrawati states that one of the focuses in the 2020 fiscal policy is to increase the competitiveness and innovation of the Indonesian people to drive a balanced mix between domestic consumption, investments, and exports.

These initiatives are part of the tremendous legacy Habibie has left behind. He laid a strong foundation for Indonesia to continue evolving into an advanced country. His thinking was way ahead his time, and made an invaluable contribution to even the current development challenges facing the country. This short piece will not be able to sum up the whole dedication of President Habibie for Indonesia. He will be dearly missed.

Technical definitions of what counts as “aid” fail to capture the full scope of American assistance in the region.
Euan Graham, Borim Yoon 24 May 2017 12:50