Geopolitical expediency has previously pushed South Korea and Japan closer together, but a painful past keeps intruding. 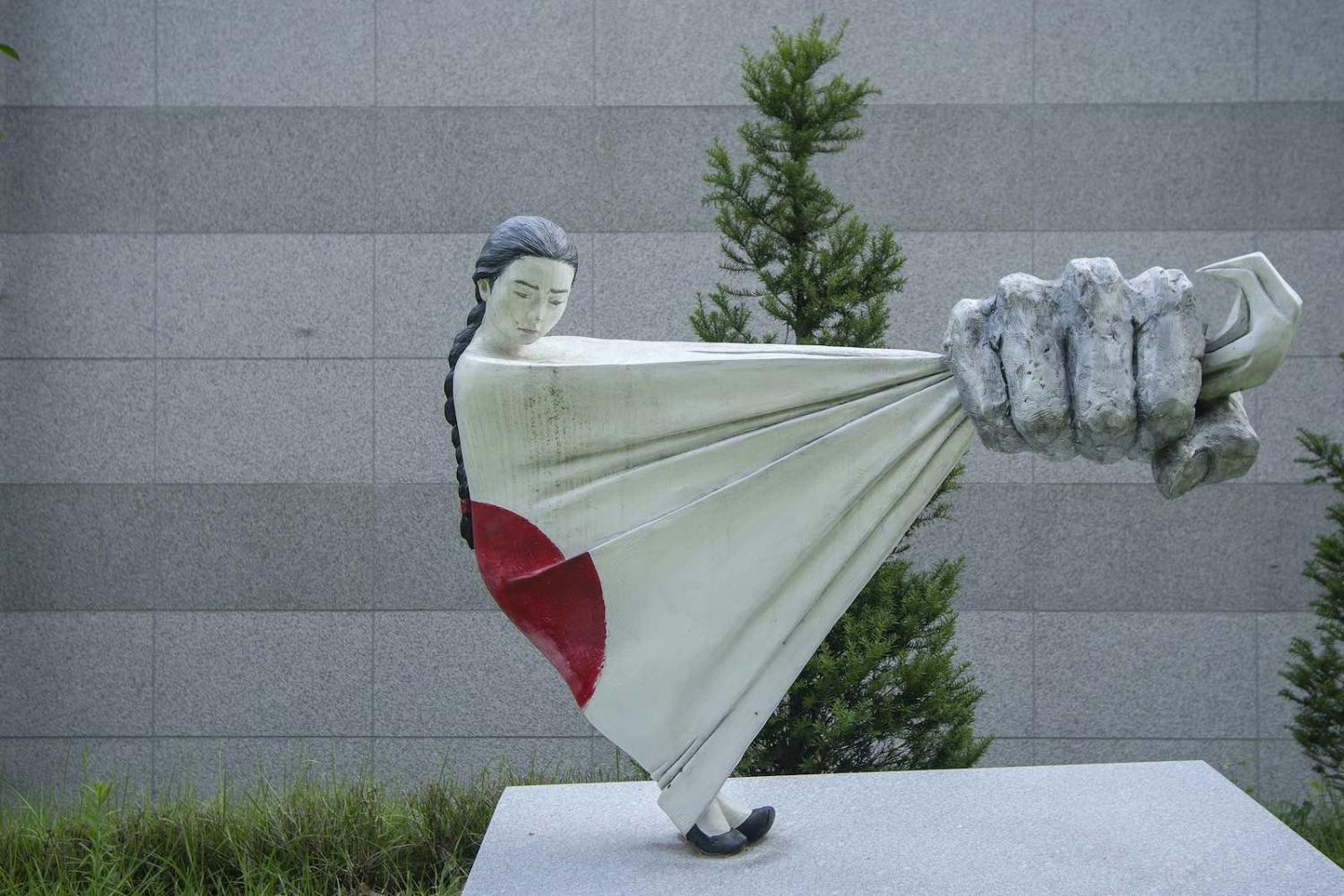 A sculpture to memorialise the “comfort women” of the Second World War at Memorial Park of Sharing House in Gwangju, South Korea (Seung-il Ryu/NurPhoto via Getty Images)
Published 4 Feb 2021

The Seoul Central District Court last month delivered a verdict requiring the Japanese government to pay $US91,000 to 12 former “comfort women” who endured sexual slavery during the Second World War.

The court’s ruling follows off the back of a similar decision by the South Korean Supreme Court in 2018 ordering Japanese companies Nippon Steel and Mitsubishi Heavy to pay compensation to victims of forced labour during the war years. This particular decision was strongly supported by the ruling Democratic Party of Korea (DPK), whose variant of Korean nationalism is built upon a strong sense of grievance against Japan. The fallout from this decision also sparked a still simmering semi-official trade war between the two nations.

While Tokyo has mostly shifted away from questioning the historical truth of atrocities committed during its colonial rule over the Korean peninsula, it nonetheless denies its legal responsibility to pay compensation. This is because of the 1965 Treaty on Basic Relations between Japan and the Republic of Korea, which saw Tokyo provide US$500 million in grants and loans to Seoul in exchange for “completely and finally” resolving bilateral historical claims.

To the South Korean public, this level of compensation amounted to small beer, having been signed at a time when the two countries had stark asymmetries in power and wealth. The practice of Japanese politicians – including former Prime Minister Shinzo Abe – of visiting the controversial Yasukuni Shrine and promoting revisionist historical textbooks has justifiably raised clear questions about Tokyo’s sincerity.

Nonetheless, facing a common threat from North Korea and under US pressure, both countries reached an agreement in 2015 to “finally and irreversibly” settle the comfort women issue. Much as it did in the early to mid-1990s, Japan again offered an apology – though not perceived as “official” by some victim’s groups because of its private nature – and compensation in the form of a $9 million “donation”.

Negotiated by the now-disgraced government of former president Park Geun-hye, the agreement was vocally attacked by the DPK. While Moon Jae-in refrained from fulfilling a campaign pledge before winning the presidency to renegotiate the deal, his government has undercut it through various actions, including the dissolution of the victim relief foundation funded by Tokyo’s donation.

From Japan’s perspective, both the 2018 and 2021 court rulings (with more possibly to come) blatantly violated international agreements. The recent court decision would seem to make even more unlikely a proposed solution to negotiate a deal to end the forced labour dispute along the lines of the 2015 comfort women solution. While questions can be raised about the moral adequacy of both the 1965 and 2015 agreements, Tokyo simply cannot be confident that any future agreement would truly be final and irreversible.

Despite there being plenty of sound geostrategic reasons for the two countries to find a way to manage the dispute, there is no guarantee that Moon will forcefully intervene.

Seoul allowing the forced seizure of Nippon Steel and Mitsubishi Heavy’s assets – as is could plausibly occur imminently – would likely send relations into freefall. Yet, despite there being plenty of sound geostrategic reasons for the two countries to find a way to manage the dispute, there is no guarantee that Moon will forcefully intervene. The nature of Moon’s foreign policy priorities and their nexus with domestic policy helps explains why.

In keeping with the DPK’s Korean nationalist ideology, Moon’s foremost foreign policy objective is essentially domestic in seeking to advance inter-Korean ties. Concrete expressions of this include his commitment to end the Korean war, removing references to North Korea as an enemy state, the “Three Nos” policy (“no desire for the North’s collapse, no pursuit of unification by absorption and no pursuit of unification through artificial means”) and the pursuit of inter-Korean economic projects – largely thwarted by international sanctions. The ultimate end goal of this process is reunification, although it must be said that North Korea’s response to these overtures has been tepid at best.

To a significant extent, other foreign policy priorities are largely subordinate to this overarching goal. Though Moon has begrudgingly abided by US sanctions, as analysts such as Jeffrey Robertson note, talk of abandoning the US alliance is now mainstream.

Despite a plurality of South Koreans identifying China as the country’s greatest security threat, Moon has been very reluctant to poke the bear. As North Korea’s sole ally and by far its largest trading partner, China will always be a pivotal player when it comes to the security and political contours of the Korean Peninsula. Accordingly, South Korea has been wary not to offend Beijing and – in contrast to Japan – has been somewhat of a lightweight in providing Indo-Pacific nations with alternatives to China. Of course, China also has its own disputes related to history in the region.

Thus, while geopolitical expediency has previously pushed South Korea and Japan closer together, Moon appears to view both China and North Korea primarily through the lens of his nationalist project. More than not being a priority, solid ties with Japan are not necessarily seen as desirable at all. Kim Jong-un has consistently rated less unfavourably than Abe in polls, while half of South Korean respondents to a survey reported they would support the North in a hypothetical war with Japan. Removing the alleged legacy of chinilpa (pro-Japanese collaborators) has been pursued by the Moon administration with great public support.

All of this has implications for what countries such the US, Australia and the broader region can plausibly hope for in their relationship with South Korea. At the moment, the best that can probably be hoped for is that the domestically preoccupied incoming Biden Aaministration can somehow push both Japan and South Korea to maintain the bare minimum level of cooperation.

Previous Article
The Donbass conflict: Waiting for escalation
Next Article
A bruising 24 hours in the Pacific

This year it is 25 years since Francis Fukuyama published The End of History and the Last Man.
David Brewster 19 Jun 2019 10:00

Australia should pursue opportunities in a booming Bangladesh