South Korea has transformed drastically over the last 20 years, and strategic change on the peninsula will be via Seoul. Around five years ago, I submitted an article to a leading strategic studies journal detailing how options previously considered extreme – such as abandoning the US alliance, acceding to China’s dominance, declaring a position of neutrality and/or securing a nuclear weapons capacity – were entering strategic debate in South Korea. Their assessment was that such views were unrealistic and fanciful. One Trump administration later, and these views have entered mainstream political debate in South Korea. It’s time to realise that strategic change on the Korean peninsula will not come from North Korea – strategic change will come from South Korea.

The dominance of North Korea in any analysis of the Korean Peninsula always amazes me. In a strategic context, South Korea is more important – significantly stronger economically, more populous and, most importantly, substantially more socio-politically dynamic.

North Korea sits frozen in time, sustaining an ailing economy and maintaining a flawed, but evidently effective, political system. Change is anathema to North Korea. The securing of a nuclear weapons capacity was not strategic change. It filled an ever-increasing gap between North Korea and combined US–South Korean conventional forces, and it reflected long-term aims, which should’ve been factored into the stock market of strategy long ago. North Korea and its strategic aims are so remarkably consistent that speculation regarding what North Korea will do next seems redundant.

Within the next administration in both the US and South Korea, decisions will be made that history books will mark as turning points.

In contrast, South Korea has transformed dramatically over the last 20 years, from a country struggling financially after the Asian Financial Crisis to a confident, well-managed economic power that has even seen growth in the midst of a global pandemic. With economic confidence has come sociopolitical transformation, and a population questioning long-held traditions, from regional voting preferences to human rights, from societal norms (education, housing, marriage, children) to travel destinations. The dynamism also naturally extends to long-held strategic traditions, which anchored South Korea through its short modern history.

Should South Korea retreat from its alliance with the United States? This is the oldest debate in South Korea, but until recently was situated on the fringe. No longer. With key policy decisions such as the deployment of the THAAD (Terminal High Altitude Area Defense), ongoing negotiations towards the transfer of wartime Operational Control Authority (OPCON) and pressure to participate in the Quad dialogues with the US, Australia, India and Japan, the debate is more mainstream than ever before. Within the next administration in both the US and South Korea, decisions will be made that history books will mark as turning points.

Should South Korea accede to China’s regional dominance? The argument that South Korea should accede to China’s regional dominance sparks the hottest debate. On one side is strategic tradition and the alliance with the US, on the other is the economy, and the vague sense that China holds the key to reforming North Korea – and ultimately the key to peaceful Korean unification. There is no middle space.

Should South Korea secure its own nuclear weapons capacity? A debate with a not-too-distant historical reality, and very present contemporary technological reality. In 1975, 1982 and as recently as 2000, Seoul undertook covert programs or experiments in the pursuit of a nuclear weapons capability. Another nuclear challenge on the Korean peninsula is just one populist administration away.

Should South Korea pursue a position of neutrality? Combined with the above, the idea that South Korea could step outside of the China–United States rivalry and continue to benefit from relations with both, is a popular one. South Korea could be the Finland, Sweden or Switzerland of Northeast Asia. The idea is often bandied about with misconstrued notions of what it means to be a middle power. In South Korea, the literal interpretation of being a middle power – positioned between the US and China – is just as common as the more nuanced interpretations common in international relations circles outside South Korea. The neutrality of South Korea would transform the regional strategic balance.

The options being discussed and now openly canvassed in South Korea should attract serious attention in the US. Instead, they are either routinely dismissed (we have an alliance forged in the blood and sacrifice of the Korean War) and/or viewed as a consequence of the Trump administration’s alliance mismanagement (after Trump, everything will be back to normal).

While the Trump administration may have precipitated open canvassing of such options, the discussions were present before Trump – and they will also be present well after Trump. Regardless of who wins the US election, South Korea, not North Korea, should be a priority for the next administration. Yet to date, throughout the election speeches and statements, only North Korea has rated mention. South Korea remains bundled together with other “friends and allies” in a looming contest with China – as if nothing has changed since 1953.

Neglecting South Korea risks the US not seeing the strategic forest for the North Korean nuclear trees. 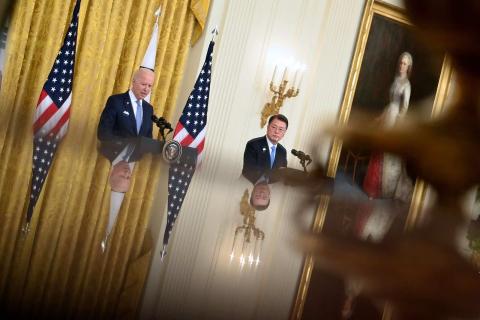 Show Comments
Previous Article
Blurring fact and fiction in the US election
Next Article
Book review: The China bubble that never pops