Against the odds, the Chinese economy has navigated multiple crises, but the future may be more problematic.

Way back in 2001, Gordon Chang wrote a book entitled The Coming Collapse of China. Western analysts of China have been predicting a crisis ever since. Among the many concerns have been China’s massive debt, the inefficiency of the large state-owned enterprise sector, excess capacity in a range of heavy industries, real estate ghost towns in the desert, white-elephant infrastructure and the rapidly ageing population. In short, while economic growth rates have looked strong, they have been financed by a debt bubble.

But the Chinese bubble never pops. Indeed, if there were ever a moment for a financial crisis, it was the first quarter of 2020, when the Covid-19 pandemic led to a sharp decline in China’s GDP. Once again, there was no sign of a Chinese bubble popping. And while many of China’s workers lost their jobs, there was not even a sign of social unrest, as often predicted by those who see a Faustian pact between the Chinese Communist Party and its citizens. Indeed, China’s economy bounced back in the second and third quarters, and it is now widely forecast to be the only large economy to record positive economic growth in 2020. 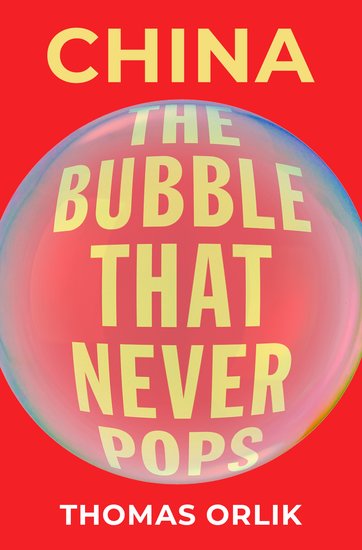 It was this paradox that inspired Thomas Orlik to write a fascinating new book, China: The Bubble that Never Pops. Orlik, who is now Chief Economist at Bloomberg, lived in China for 11 years and has seen many Western prophets of doom at close hand.

Orlik has documented a thorough financial history of China’s reform era. The first cycle was launched by Deng Xiaoping in 1978 with the initiation of reform and opening-up policies. This was followed by Deng’s “southern tour” in 1992 to restart reform in the wake of the Tiananmen Square crackdown. The next cycle was in 2001, when China joined the World Trade Organisation and Premier Zhu Rongji implemented large reforms to the state-owned sector. The fourth cycle began after the global financial crisis in 2008–09 with China’s mega fiscal stimulus.

Against the odds, China navigated many pointy challenges that may have burst the bubble, such as the Asian financial crisis, the Wezhou shadow banking crisis, periods of capital flight and a botched yuan devaluation. How could China manage to escape a national financial crisis?

Orlik argues that Western analysts focus too much on the assets side of the balance sheet and non-performing loans. This is not surprising, as China’s debt has risen from 140% of GDP in 2008, before the global financial crisis, all the way up 300% of GDP today. But the liabilities side, or the sources of funding, is more important. China may have an enormous debt, but Chinese banks are protected from financial crises by a stable, low-cost source of funding – thanks to the very high savings rate and strict controls on moving capital offshore.

Orlik also believes that Western analysts underestimate the competence and reform record of Chinese leaders. Former president Hu Jintao is portrayed as a committee man who was too weak to pass painful reforms. While President Xi Jinping is seen as a more muscular and decisive leader, his instincts are not thought to be in the right place, as he emphasises the role of the state in the economy, rather than the market.

There are some elements of truth in both those stories, but both Hu and Xi have managed a lot of reform. Over the past two decades, China’s leaders have successfully executed comprehensive reform of the exchange rate, and have gone a long way towards liberalising interest rates. And in 2016, in the face of very high debt, Xi and his top economic lieutenants launched a deleveraging campaign. This shows that Chinese policymakers can be proactive, and are rather good at identifying problems before they blow up and then taking some decisive steps to change the situation.

Orlik also argues that there are grounds for optimism about China, because it still has much room to grow. Its GDP per capita is only one third of the US level. This means that it can continue growing by catching up to the global technology frontier through assimilating and diffusing the technologies from world leaders like the US, Germany and Japan. And it doesn’t need to innovate to keep growing.

Orlik does not seem to recognise that financial crises can be good medicine for an economy. In fact, the Chinese economy needs a good crisis.

Looking ahead, Orlik is confident that China can continue to manage its economy well and avoid a financial crisis – even if it must start a new cycle with growth relying on services, consumption and the private sector.

But he does recognise that the future may be more problematic. China is still a long way from the global technological frontier, and needs access to Western technology and knowledge to continue its economic catch-up. This may be more difficult in light of the deterioration of relations between China and the US and other Western countries – especially if the next US president can bring together a common front of advanced countries to tackle China’s trade and technology policies.

It’s also not clear that state control of the commanding heights of the economy will work forever. One issue that Orlik does not explore is the adverse impact on productivity of policies to forestall financial crises by feeding bank finance to zombie companies. As the International Monetary Fund has documented, China’s productivity growth has declined steadily since the global financial crisis exploded in 2008, and a big improvement in the efficiency of investment is now needed. And Orlik does not seem to recognise that financial crises can be good medicine for an economy, as they can stimulate creative destruction of inefficient zombie companies. In fact, the Chinese economy needs a good crisis.

One of many contributions of Orlik’s book is the invention of the word “Sinophrenia”, which is “the simultaneous belief that China is about to collapse and about to take over the world.”

For the moment, however, Covid-19 has enabled China to steal a march on us all.

Previous Article
Coming soon: A neutral South Korea?
Next Article
Is China speeding up military modernisation? It may, but not yet