The new legislation marks the completion of Beijing’s total control and surveillance of every quarter of the PRC. 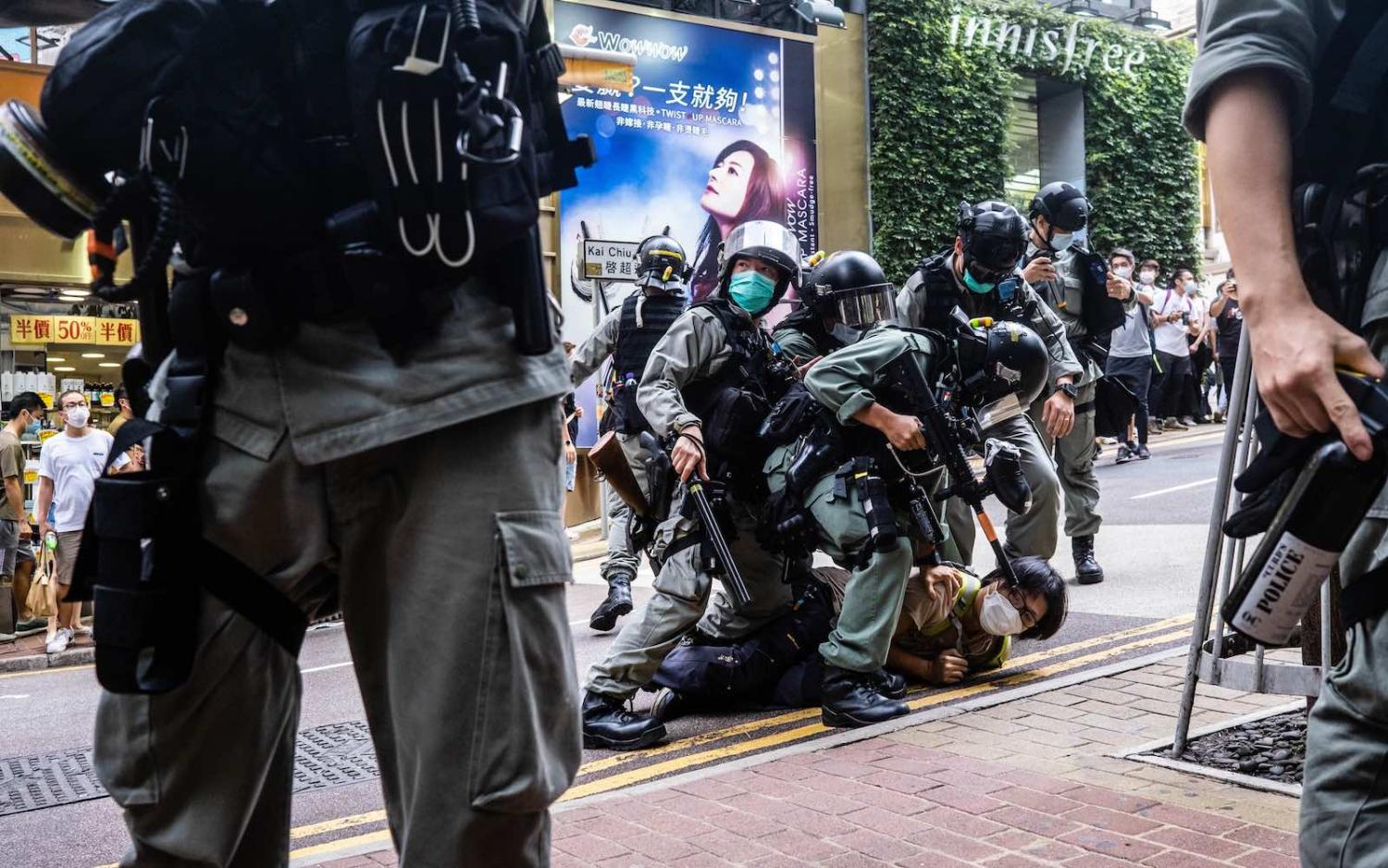 Riot police pin down a protester during a demonstration after the passage of a new security law in Hong Kong, 1 July 2020 (Willie Siau/SOPA Images/LightRocket via Getty Images)
Published 2 Jul 2020

The 30th of June is always a challenging day in Hong Kong, as it marks the eve of the anniversary of its 1997 accession by the People’s Republic of China (PRC). This year, it proved especially trying for Hong Kong’s beleaguered chief executive, Carrie Lam, whose approval rating has swung over the last four months between 9% and a Covid-suppressing high of 27%.

Nonetheless, she managed both to downplay the impact of the new National Security Law Beijing would impose the following day on her city – only an “extremely small minority of people” who had broken the law would be affected by it, she said – and also to use a scheduled address, via video, to the UN Human Rights Council in Geneva to champion the need for its introduction, claiming that Hong Kong had been plagued by protests that were “fanned by external forces”.

All 162 members of the National People’s Congress standing committee supported the law, passing it within 15 minutes of the start of their meeting in Beijing’s Great Hall of the People on the morning of 30 June. That evening, Chinese President Xi Jinping effected it by signing the document.

The legislation was expected to be tough, but it far exceeded even the fears of the pro-democracy campaigners who had attracted the world’s attention.

Following the suppression first of Tibet and then of Xinjiang, the Hong Kong legislation marks the completion of the Party’s unanswerable control and total surveillance of every quarter of the PRC. Lam told the Human Rights Council: “We could think of no valid reason why China alone should be inhibited from enacting national security legislation to protect every corner of its territory.”

Distracted by Covid-19 and the upcoming presidential election in the US, the West has been reduced to issuing press releases and imposing restraints that will hurt Hong Kong far more than Beijing.

It comprises a stunning success for Xi – effectively concluding the brave original 50-year “one country, two systems” formula that always jarred with his core inclination to ensure that “north, south, east, west and the centre – the Party leads all”.

Distracted by Covid-19 and the upcoming presidential election in the US, the West has been reduced to issuing press releases as a response and, in Washington’s case, to imposing restraints that will hurt Hong Kong far more than Beijing.

Only hours after the new law came into effect, police paraded a new banner warning protesters in Hong Kong’s Causeway Bay that they were violating it. They arrested 370 demonstrators, including ten charged under the new law – one for carrying a flag with a “no” in front of a slogan for Hong Kong independence, and another for waving a Taiwan flag.

Sweeping powers of surveillance, including of online communications, are granted without judicial oversight to the police, who may hire “qualified specialists” from the mainland or elsewhere.

The law sets up a National Security Agency administered by the PRC, deploying security agents of the central government to analyse, judge, supervise Hong Kong’s own administration, and “handle crimes against national security”. This agency will not be subject to Hong Kong’s jurisdiction, and neither its staff nor their vehicles can be searched.

New crimes include those of speech alone, and also cover organisation of, planning of or participation in the separation of Hong Kong or any other part of China from the PRC. Overthrowing “China’s basic system”, obstructing the central authority of the PRC or of Hong Kong, accepting support from overseas bodies or people to obstruct PRC or Hong Kong policies, or “inducing hatred towards the PRC or Hong Kong governments” are also covered.

“Necessary measures” will be taken “to strengthen public communication, guidance, supervision and regulation over matters concerning national security, including those relating to schools, universities, social organisations, the media and the internet”.

The sentences range from life imprisonment to a minimum three years. Lower sentences are for those who “incite, assist, abet, or use money or other property to assist others in committing” such crimes. Trials over public order or “state secrets” – a very broad category in the PRC – may be barred to the public, and those charged will be refused bail as the default.

Cases deemed too “complex”, “difficult” or “serious” for Hong Kong will be prosecuted and tried in mainland China, and ensuing sentences served there.

The law is extended to Australia and anywhere else where people may be deemed to commit crimes under it, “outside the Hong Kong Special Administrative Region”. Other countries including Australia have also passed laws that posit extra-jurisdictional coverage, but rarely if ever, relating to crimes that include expression alone. Three years ago, parliamentary opposition forced the then–Turnbull government to withdraw a proposed China extradition bill.

The impact of the law on the 7 million Hongkongers has included the disbanding of the most prominent protest-era party, Demosisto, by globally famous 23-year-old leader Joshua Wong, a Christian, who posted Psalm 23:4: “Yea, though I walk through the valley of the shadow of death, I will fear no evil: for thou art with me…” He added that the law “marks the end of the Hong Kong the world knew before”. Whether it destroys the morale of the other pro-democracy parties, their leaders and supporters will become clearer at the 6 September legislative election.

Anticipating the impact of the law, a new Taiwan–Hong Kong Services and Exchanges Office has been opened in Taipei, intended to attract professionals and capital from Hong Kong.

Chinese mainlanders who have enjoyed the greater freedoms in Hong Kong and the protections offered by the rule of law there – including many business leaders – may feel they might as well return home or consider shifting offshore altogether.

Expatriates in Hong Kong will likely wait to see how the new law affects their work and lifestyles. But there will be a sharp contraction in their access to information. Media companies, NGOs and other international bodies are already planning to move.

Tourist numbers are set to sink as Hong Kong’s commercial vibrancy is smothered by the new controls, and visitors who have any track record in expressing criticism of the PRC or CCP are likely to avoid the new risk involved in entering the city.

History and heroes hold the spotlight, 20 years after the country voted for its freedom.
Daniel Flitton 6 Apr 2020 14:00

A round-the-world tour of culinary tips to give your quarantined kitchen a truly international flavour.
The Interpreter 28 Dec 2018 07:00

Best of The Interpreter 2018: Press freedom in Southeast Asia

In a region marked by rulers with much to hide, these moves to silence the criticism of the mighty is worrying.