Public backing for the demonstrations is bolstered by their propaganda-puncturing uses of social media. 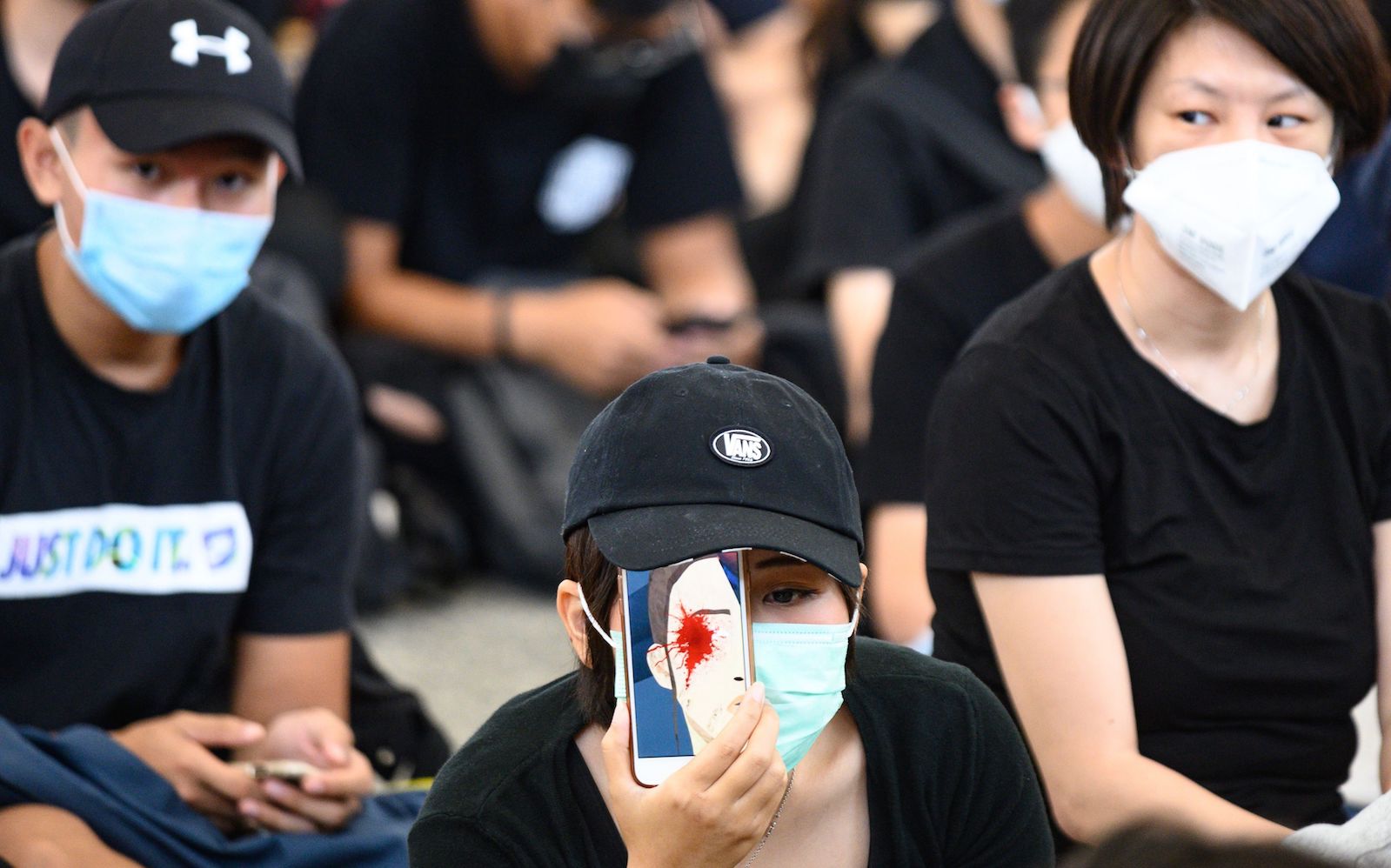 On Sunday, more than 1.7 million Hongkongers braved torrential rain for yet another massive and peaceful rally. The astonishing size of the turnout might have caught some people off-guard, especially those who believed that the movement has already lost its public support after violent clashes among protesters, alleged moles from mainland China, and the police broke out just days ago at the protest at the airport. Leaders of the Hong Kong government sitting in air-conditioned offices, and possibly even those in Beijing, might find the phenomenon mind-boggling.

The Hong Kong government led by Chief Executive Carrie Lam has been treating the issue as a failed publicity campaign rather than a political crisis.

Why, after nearly two-and-a-half months since the movement began, with the extradition bill that ostensibly sparked the protests abandoned, and demonstrations gone from peaceful to aggressive, is the public’s opinion in support still solid and almost unshakeable?

A recent conversation with a 60-year-old might shed some light on this. A housewife with just a primary-school education and who speaks little English, this auntie from my family fits the profile of the nationalistic, patriarchal, and pro-government “blue ribbons” who are blindly patriotic and against anything that rocks the boat of Hong Kong. But to my surprise, not only does she not watch the news on TVB, the city’s biggest broadcaster, or read newspapers, which regularly put the worst slant on the protesters and their motives, she is actually an avid follower of live-media-streaming scenes of protests in real time and political commentaries on YouTube, including channels of some of the most radical and foul-mouthed commentators whom even I find unbearable.

I asked her why she has ditched the traditional media. She simply said, “There are so many other options out there.” And what is her take on the protests?

I have never participated in any of the protests, but I feel sorry for the young people. They have to walk the extreme path because the government does not listen to them. And the police is brutal, firing tear gas in residential areas and even subway stations. And not to mention the disappearance of the police when thugs in white shirts attacked ordinary people in Yuen Long. I have seen it all.

If this is typical of a 60-year-old woman who does not go to protest, imagine what the younger population actively participating in the protests have been doing.

Ever since 1 million people took to the streets on 9 June to march against the bill that will allow suspects to be extradited to stand trial in mainland China, which has a legal system that many do not trust, the Hong Kong government led by Chief Executive Carrie Lam has been treating the issue as a failed publicity campaign rather than a political crisis. The bill was suspended because officials did a poor job in explaining the bill to the public effectively, it was claimed, not because the bill was so problematic that it could bring down the firewall that separates Hong Kong’s common law system from that of mainland China.

The government has been waiting for chances to swing public opinion. The opportunity came on 1 July, when the black-clad, masked protesters stormed the Legislative Council building. Instead of mobilising the police force to guard the building and disperse the protesters before they took action, the building was largely unguarded throughout the day, giving protesters a tremendous amount of time to break the glass doors with their primitive tools. And by the time they entered the building at night, there was no police in sight. The next day, Lam conveniently condemned the protesters, constructing a narrative of how protesters have become mobs or even violent rioters, spread chaos and disorder across the city.

It might have worked, had this happened before the age of social media, camera phones and live streaming. But the reality is that most people in Hong Kong have already witnessed the brutality of the police via live broadcasts by journalists with traditional and online-based media on 12 June, when the police cracked down on the protest to stop the second (and possibly third) reading of the bill outside of the Legislative Council and government headquarters. The images of police shooting rubber bullets and beanbag rounds at unarmed protesters and firing tear gas into the crowd were already imprinted in people’s minds. Besides the live footage by journalists, videos taken by citizens’ camera phones on the ground surfaced on social media and also went viral. Those who experienced such police brutality first-hand or simply watched this footage online were traumatised to various degrees.

Trauma needs to be healed. But instead of healing this wounded society, the authorities continue to escalate the use of force to suppress the protests, with Beijing’s backing. Over the past weeks, the people of Hong Kong have witnessed through live footage and videos on social media a much greater degree of violence inflicted upon protesters. Incidents such as police letting go of thugs attacking citizens indiscriminately in Yuen Long on 21 July, a young female medic getting shot in the eye, police firing tear gas inside the subway stations and residential areas, as well as undercover police dressed as protesters making arrests in Causeway Bay on 12 August have only sowed greater distrust in the government and the police. More and more residents in these neighbourhoods are standing up to the police and fighting back.

Hence, no matter how hard the government tries to spin public opinion through the network of traditional media, the effort is futile. People are much more forgiving of aggressive tactics, as half of the protesters believe that non-violent means no longer work, according to a Chinese University survey. The public will voice their disagreement when things have gone wrong, such as the violent clashes at the airport, but they also vow not to cut themselves off from frontline protesters, because they understand the heightened emotions and hyper-sensitivity towards undercover police or personnel sent by Beijing.

In Sunday’s peaceful rally, the people of Hong Kong again demonstrated their utmost determination and willingness to fight for the freedom and rights they were promised when the city was handed over by Britain to China in 1997. The authorities should have learned by now that propaganda will not sway this faith and perseverance. Politics, not trickery or force, is the means to deal with the Hong Kong issue properly.

Show Comments
Previous Article
All may not be smooth along China’s Digital Silk Road
Next Article
Is the notion of the United States acquiring Greenland that absurd?