On Pakistan, Trump has said out loud what has until now been largely debated and threatened in private. 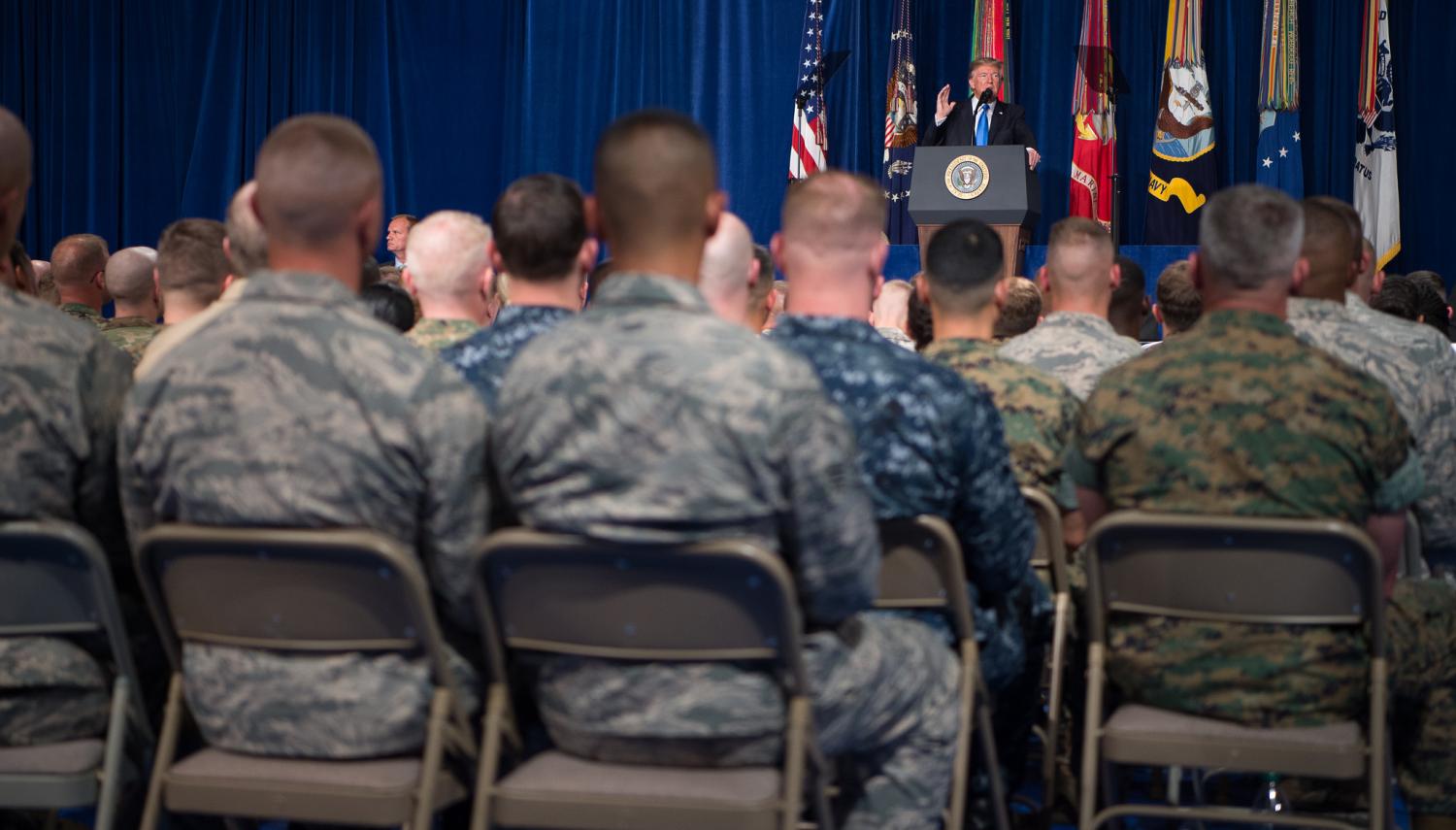 Perhaps the most notable part of President Trump's new Afghanistan 'strategy' is its treatment of Pakistan, with Trump saying out loud what was once largely debated and threatened in private:

The next pillar of our new strategy is to change the approach and how to deal with Pakistan. We can no longer be silent about Pakistan's safe havens for terrorist organisations, the Taliban, and other groups that pose a threat to the region and beyond.

Trump's comments were met with predictable glee in India, which was singled out for praise in the speech on 21 August, and angry defiance of a 'false narrative' in Pakistan.

A number of experts have already weighed in on the viability of this approach. Several observers have praised Trump's willingness to threaten Pakistan in more forthright terms than ever before, potentially forcing it to re-consider the costs of sponsoring the Taliban and other groups.

Others, including those under no illusions about Pakistan's double game, have been more cautious. Christopher Clary outlined the risks in an excellent War on the Rocks essay, concluding that 'Pakistani support of groups that have targeted US forces…may well be a moral travesty, but geopolitically it may be less costly than losing Pakistan's cooperation in other areas'. Stephen Tankel, who has published some of the very best work on how the US should handle Pakistan, warned that there was 'little evidence that coercion on its own will work'. Both sets of views deserve careful consideration.

It may be helpful to consider how things are likely to play out in the short term, and then two scenarios that might follow.

The coming months are reasonably predictable. Pakistan will likely first seek to clarify Washington's intentions in order to judge how seriously to take Trump's rhetoric – after all, US criticism of Pakistan is not wholly unprecedented. If the Pakistan Army feels it can placate Trump with an easy win, such as the arrest of a few well-chosen Taliban leaders (perhaps those who were getting too close to Iran, or to Islamic State) or the sharing of intelligence that allows US drones to target Haqqani network leaders, that might be seen as a way out. As we know from the leaked phone call with Mexican President Enrique Peña Nieto, Trump is sometimes happy to concede in private as long as he maintains the public appearance of victory.

At the same time as exploring this US threshold, Pakistan will seek to increase its real and perceived leverage. Pakistan's Foreign Minister Khawaja M Asif has already announced that he will now visit Beijing ahead of a previously scheduled trip to Washington, and the country's Army Chief met his Chinese counterpart (among others) at a regional security forum in Tajikistan on Sunday. Pakistan will be eager to play up China's political, economic, and military commitment to Islamabad.

This period of phony war, in which both Washington and Islamabad probe the other's resolve, may last for months. The US may begin by withholding and slashing larger amounts of reimbursements and aid, beyond the 40% cut for the last fiscal year. The US might also allow drones strikes to creep beyond the tribal regions, targeting Haqqani network personnel in the province of Khyber-Pakhtunkhwa (as it did in a rare strike in June). Pakistan might respond by quietly but modestly impeding the flow of US supplies into Afghanistan through bureaucratic means (as it has done in the past). Neither side would want the relationship to collapse too quickly or deeply, but friction would steadily grow.

What follows this phase is the central question. From the US (and probably Afghanistan's) perspective, the ideal scenario is that Pakistan eventually realises that it cannot afford a full-fledged confrontation with the United States.

Optimists would point to the following dynamics:

1. China, despite the occasional modest bailout, has never plugged a financial gap on the scale that may be required, potentially leaving Pakistan to seek what would be its 13th IMF loan since 1988.

2. Yes, Pakistan can shoot down drones (after all, Pakistan has done it to Iran, Iran to the US, and the US to Iran), but the US could escalate to strikes by manned aircraft from Afghan airbases, hugely upping the risks of a shoot-down. Recall the Bush administration's crass threat to 'bomb Pakistan back to the stone age' in 2001; the Trump administration is likely to have few qualms about escalating in this regard, having already shown a remarkable tolerance for civilian casualties in Syria, Iraq, and Afghanistan.

3. Finally, Pakistan can shut down US supply lines, as it did in 2011, but Washington could turn to a Turkmenistan-Azerbaijan-Georgia-Turkey corridor (as Barnett Rubin has explained, this would be hostage to Russian pressure).

Even if Pakistan were successfully coerced in this way, however, it would not simply stop sheltering and supplying militants at once. In his speech, President Trump sensibly held open the prospect of a political settlement involving the Taliban – Secretary of State Rex Tillerson later reinforced this message. Pakistan would therefore seek to translate its influence over the insurgency into a desirable political settlement, ensuring that its own favored factions (rather than independent-minded insurgents, factions backed by the Afghan government itself, or those supported by Iran) would be empowered. In such a scenario, Pakistan would need to put pressure on recalcitrant insurgents: limiting their movement across the border, denying them safe houses, arresting some, and perhaps conniving in the assassination of others.

Even if this were eventually successful, this could have a number of unintended consequences. It could amplify splits in the insurgency in the short- and medium-term. As Pakistani support receded, some factions could turn to other groups, such as Islamic State, or to other powers, such as Iran or even Russia (this is exactly the dynamic observed in a recent study). There could be a violent backlash within Pakistan, as there has been after past crackdowns, testing Pakistani resolve and widening political divisions.

If a settlement were reached (certainly possible, although it's hard to see how it could be shepherded by a hollowed-out State Department), then this could have a stabilising effect, allowing US forces to depart. China, Russia, and Iran would welcome these outcomes. But it would also change the shape of the Afghan government in ways that might, ironically, diminish Indian influence. Finally, any deal would not necessarily be permanent. A succession of regional deals around Afghanistan in the late 1980s and 1990s quickly fell apart under the pressure of battlefield dynamics. It remains to be seen how the US would hold Pakistan to any deal once it lost its troop presence and airbases.

In the second scenario, Pakistan would seek to ride out US pressure, hoping to see through Trump's term until a more war-weary successor arrived. Pakistan may bank on Russia forcing Turkmenistan to sever US supply lines, leaving the US with a choice of capitulation or withdrawal. Islamabad may also benefit from tension between the US and allies: European countries make up a significant proportion of the NATO-led force in Afghanistan. Would they have the patience and stomach to see out any loss of Pakistani routes? Pakistan may also judge that Chinese support will suffice, if Beijing sees an imperative to protect its huge investments as part of the China-Pakistan Economic Corridor (CPEC) and an opportunity to deepen the relationship with Islamabad amid Sino-Indian confrontation. 'Without explicitly confronting Washington,' writes Andrew Small, 'there will be areas where Beijing actively seeks to blunt the effectiveness of this aspect of US policy.'

This scenario implies a steadily growing level of conflict. As the US expands pressure and Pakistan hits back, the Afghan-Pakistan frontier would grow more violent. There could be a reinvigoration of CIA-backed Counterterrorism Pursuit Teams (CPT) raids into Pakistan, matched by intensified Pakistani support for insurgents, who would find shelter deeper inside Pakistani urban areas, beyond the reach of drones. Cross-border shelling would rise, and the already routine closure of border crossings would become more frequent.

Cooperation between the US, Afghan and Indian intelligence agencies might grow, with all three countries hoping to impose a greater cost on Pakistan. The US relationship to Pakistan's intelligence agency, the ISI, would appear ever more like that with the Iranian Revolutionary Guards Corps (IRGC): bitter, competitive, and hostile. Some Pakistani intelligence officers could be sanctioned, perhaps as part of the Specially Designated Nationals And Blocked Persons List (SDN), while the CIA would certainly lose its once substantial access in Pakistan. In this context, the role of Britain, which brokered key Afghanistan-Pakistan agreements in 2015 and 2017, as well as other European powers, would be interesting. Russia, which has already cautioned against US pressure, would surely look to take advantage, building on the expansion of its military ties with Islamabad over the past year.

Both of these scenarios, including the first 'success', are sobering. They involve high levels of region-wide uncertainty and instability. They draw in virtually all the current and aspiring great powers (the US, China, Russia, and India) in different ways, thereby connecting the Afghanistan question to other regional issues. Yet it is now difficult to see the status quo as stable. The President has put his own credibility on the line, he has Republican support for his approach, and a Congress exasperated with Pakistan. A great deal, therefore, depends on the calculations of the Pakistan Army in the months ahead.

Previous Article
Islamic State is changing the face of terrorism
Next Article
Has Marawi killed the Philippines peace process?

The reporting of Trump’s health has quickly fallen into the same polarised pattern of so much of his presidency.
Dick Grant 19 Oct 2020 11:00

A resounding endorsement for a popular prime minister’s virus response. Economic rebuilding stands as the next test.
The Interpreter 11 Jun 2018 07:00

A primer for the Trump–Kim summit

How The Interpreter has followed a remarkable few months of on-again off-again diplomacy.