But Australia and other international partners have a role, too.

The visit in recent days by Indian Foreign Minister Subrahmanyam Jaishankar to Maldives is further demonstration of India’s intention to build long-term ties. Jaishankar’s visit to Addu Atoll, in the far south of the country, also highlights the particular importance of that atoll to India and its partners.

Maldives is an archipelago of some 1200 islands stretching north-south in the central Indian Ocean, south of India. Its geography makes it a strategic “prize” by big powers, despite its isolation and tiny population of only 500,000 people. For much of its history, Maldives has had to work pragmatically with bigger powers while also guarding its autonomy.

Of particular sensitivity is Maldives’ relationship with neighbouring India, one of the largest countries in the world. The present government under President Ibrahim Mohamed Solih pursues an “India First” policy that is intended to reassure New Delhi that Maldives will not be a source of threats, while also treading carefully with local community sensitivities. This is sensible. The previous government under president Abdulla Yameen made the mistake of thumbing his nose at New Delhi and while pursuing (often, corrupt) relations with Beijing. He was thrown out in disgrace in 2018 and later jailed. 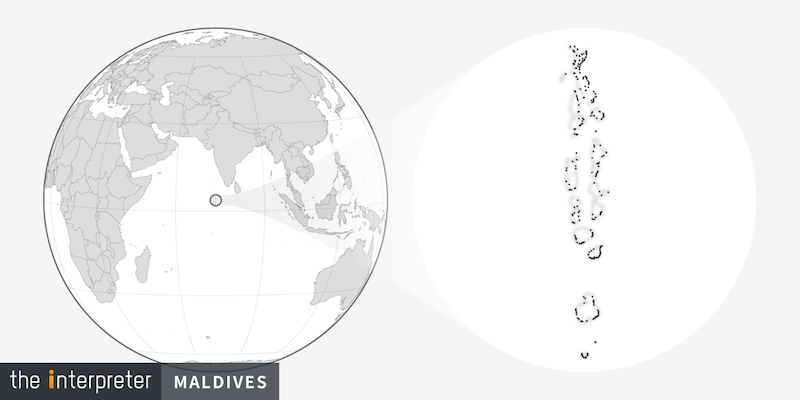 For years, New Delhi has been working to entrench itself as Maldives’ key security partner, including through providing training to the Maldives defence force, an aircraft and helicopters and, most recently, helping to build a major new Coast Guard facility near the country’s capital, Male. Japan, Britain, United States, and more recently, Australia, have also been stepping up their activities, although coordination among those countries is very poor.

Over the last few years, New Delhi has also sought to better stitch Maldives into regional partnerships, including through a new security grouping for countries in the central Indian Ocean called the Colombo Security Conclave. This brings India together with Maldives, Sri Lanka and Mauritius, and potentially also Bangladesh and Seychelles (still considering invitations to join). The Conclave focuses on a range of transnational security issues that are priorities for the smaller states in the region, including maritime safety and security, terrorism and radicalisation, trafficking and organised crime, and cyber security.

Maldives has previously been reticent in joining international groupings, reflecting limited resources (and it only recently joined the main transregional political grouping, the Indian Ocean Rim Association). But the Colombo Security Conclave could provide Maldives with a valuable forum to work with neighbouring states on matters that are important to it.

The causeway connecting Gan island with the rest of Addu Atoll, seen in 2016 (David Stanley/Flickr)

The visit by Jaishankar was significant in that it was to Addu Atoll in the far south of the archipelago, which is often regarded as the biggest strategic “prize” in the country.

Addu was home to a British air and naval base up to 1976, initially built to counter Japan, and then as a key regional staging point. The British built a large airfield, which has recently been improved and extended with a runway of 3400 metres. The atoll also provides an excellent port, whose facilities are now being improved. Addu’s location makes it perfect for accessing large parts of the central Indian Ocean, just like the disputed US base on Diego Garcia, some 700 kilometres to the south.

Coordination among international partners has been sorely lacking.

For decades since the British departed, India has tried to secure access to Addu, or at the least to keep other potentially hostile powers out. In the late 1970s, New Delhi saw off attempts by the Soviets and even Iran to build military outposts there. Growing major power competition in the Indian Ocean makes that imperative even stronger today.

New Delhi has been slowly developing its presence over the last decade or more. Today the old British base hosts an Indian naval helicopter and supporting crew for medical evacuations, search and rescue and surveillance of Maldives waters. This, along with another helicopter and a fixed wing aircraft based elsewhere performing similar tasks have been the subject of an “India Out” campaign organised by supporters of the former president Yameen.

India has also now built a Police Training Academy and a drug rehabilitation centre on Addu, which Jaishankar opened this week. Indian interests are also involved in several other large-scale infrastructure projects in Addu including building roads and drains and a large land reclamation project in Addu lagoon.

Last year, Delhi proposed opening a consulate on the atoll, the first diplomatic post for any country outside of Male. The Maldives government supported the move in principle. Local Addu community representatives, who have long been jealous of their autonomy from the Maldives central government, also declared their support for anything that encourages tourism, development and connections with the outside world. But anti-Indian sentiments – largely outside of Addu – have put the initiative on hold.

Maldives is moving to broaden its international relationships. This includes Japan and the United Kingdom. Australia and the United States have also recently announced the opening of missions in Male.

There is little doubt that a broader set of international partners could help reduce public perceptions of over-reliance on India. Greater visibility of the work of other liberal democratic countries in helping to build Maldives’ capabilities in social needs, infrastructure, maritime conservation and security should be an important part of a cohesive narrative of support for the country. Unfortunately, countries such as India and Japan, which have been the biggest donors to date, have not been good at building that narrative. Coordination among international partners has also been sorely lacking.

The importance of Addu means that it should be an important focus for assistance and local partnerships. There is no shortage of potential projects, including in marine ecology and conservation, social development and addressing (considerable) local drug problems. The Addu community generally welcomes outside assistance and can become a vocal advocate for new initiatives.