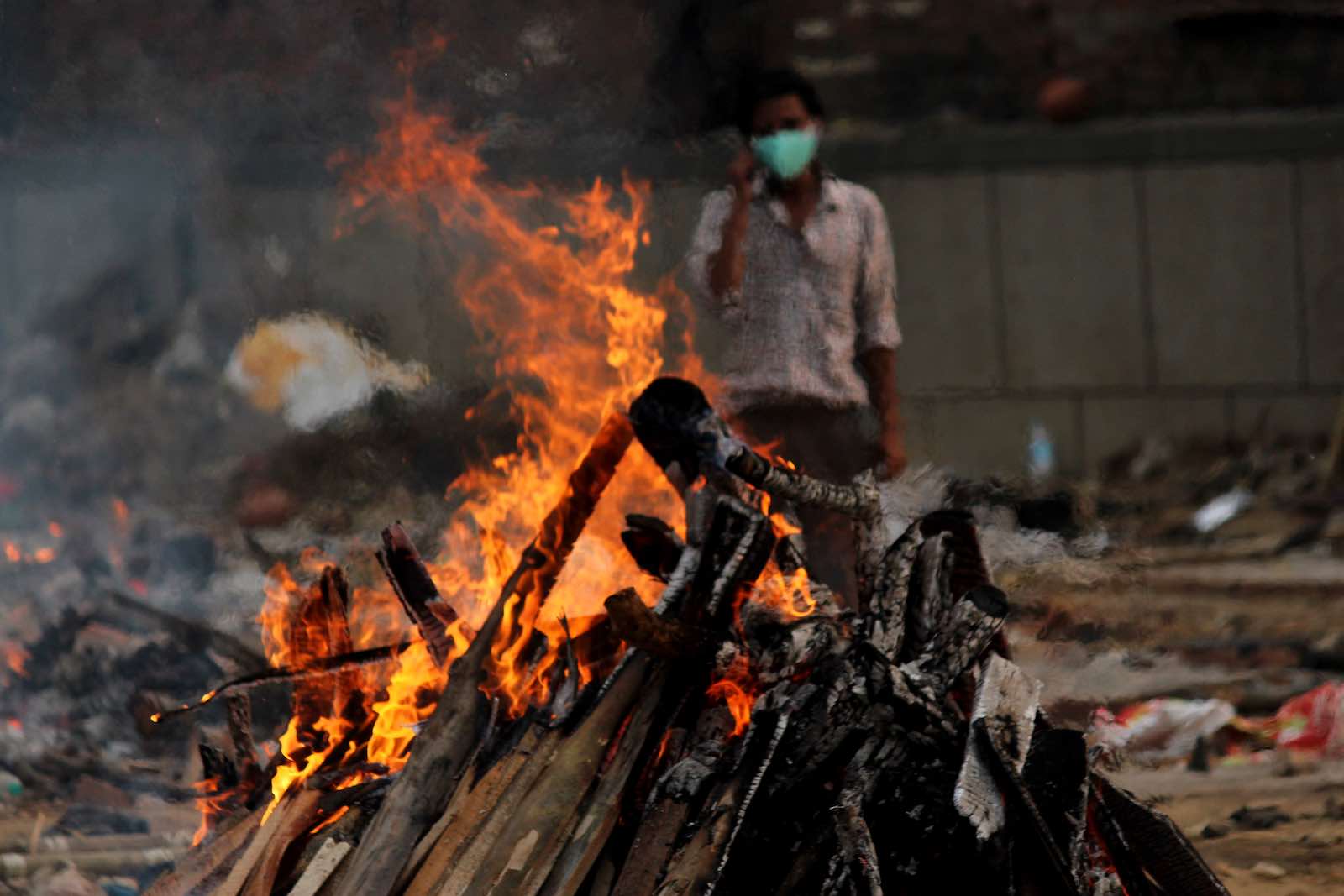 A burning pyre at a makeshift crematorium in Delhi, India on 1 May (Mayank Makhija/NurPhoto via Getty Images)
Published 3 May 2021 13:30   1 Comments       Follow @pomegranitaa

Watching a Hindu cremation, in which the body is burned on an open funeral pyre, is a profoundly confronting experience. The body is placed onto a cement platform. A pyre is built around it, with wood stacked in a triangular tunnel to allow the fire to breathe. Ghee is scattered around the structure to help the flames along. As you watch the fire burn and with bits of ash flying high and all around, you grieve and reflect, but as it grounds down and the deceased returns to the earth, you pass over into acceptance. It is raw, primal and earthy – but it is above all, deeply soulful.

The open cremation needs fuel, it needs space, but most of all it needs time. It can take an hour or more for the body to burn and for their soul to be released, and it shouldn’t be rushed.

Which is why the photographs of corpses wrapped in white cloth and lined up outside crematoriums, under the scorching April sun, is for me perhaps the most potent of all the images bleeding out of Delhi. It is unimaginable to be forced to rush through the moments of saying goodbye and letting go. To have to, as I’m reading about, fight with fellow mourners for firewood or space. Makeshift crematoriums are now being built in car parks and parks across the capital, and trees are being cut down for fuel, meaning the scars on the city are now physical, as well.

Indians are angry – not just at their own government, but at the international community, for ignoring them in their time of need.

The current crisis in Delhi and elsewhere in India, where a wave of Covid-19 has exploded like a bomb, has catalysed the country’s deep sense of malaise. The virus does not discriminate on the basis of religion or economic status, but the cheek-by-jowl living in India’s cities make its people a prime target. Already, the healthcare infrastructure was overburdened, and in some cases archaic and ineffectual. Now, it is teetering on the verge of collapse. Delhi is a city choking to death.

And the worst is yet to come, with experts predicting that the peak of this wave will come in about mid-May. It is unimaginable to think how the crisis could worsen – and how much more loss is to come.

The crisis has also exposed how easily ruptured the carefully nurtured bilateral ties can be. Indians are angry – not just at their own government, but at the international community, for ignoring them in their time of need, or seemingly condescending to them, such as in Angela Merkel’s throwaway comment about Europe “allowing” India to be the world’s pharmacy. At the same time, Australia continues to keep its gates closed to even Australian citizens in India, potentially trapping them in a ticking time bomb of contagion.

India is a country that is too populous and too fragmented to be governed efficiently. It might be a democracy, with signs of economic growth everywhere, but those things that happen well happen because of its people, not its rulers. The vaccine facility pumping out Covidshield? A private company with one shareholder. Schools, hospitals and aged-care facilities are privatised where possible. In fact, the growth of the private health system means that people struggle to access public health. Indians are rightly proud of having found a workaround to systemic government failings by creating a parallel private system, but perhaps that has been counterproductive: in failing to hold the public system to account, it has allowed it to continue to degrade. (To be fair, India has a ridiculously low tax base, with between 1 and 3% of the workforce paying taxes.)

The same can be said of the country’s vast networks of NGOs, which are now a vital part of the economic system, as they so regularly step into the breach of services which should be government-funded.

Anyway, it is all now moot, as no one, private nor public, is able to access an efficient supply of oxygen.

Private shipments are being arranged: for example, the entrepreneurs behind the courier service Delhivery have announced they have chartered flights from China to help bring in oxygen compressors. Mass appeals for funding for NGOs such as the Hemkunt Foundation and Give India have gained enormous traction. The PM-CARES Fund, which was meant to fund 162 oxygen plants across 14 states (so far, just 33 have been delivered), received a $50,000 boost from Australian cricketer Pat Cummins. Interestingly, the IPL cricket schedule is continuing, with matches this week in Delhi and Ahmedabad, although it is attracting increasing criticism. “There is another month to go – a month when there will be more cases, more deaths and greater anxiety, all matched by the triumphalism and crassness of the tournament being played in a bubble,” writes Suresh Menon in The Hindu.

Just how this will play out politically is starting to become evident. My personal barometer is my family WhatsApp group, where my many Modi-loving relatives have recently fallen silent, preferring instead to post photos of their first and second vaccinations. There is no doubt that Prime Minister Narendra Modi has lost enormous support, across the country, over his government’s mishandling of the crisis. From failing to anticipate the second wave and prop up the health infrastructure accordingly to holding mass election rallies in West Bengal, Modi appears not just tone-deaf but wilfully intent on denying the enormity of the infection. It is also clear that the Indian government is minimising the casualties. The real number is estimated as anywhere from two to ten times the official figure. Media outlets have now stationed journalists outside crematoriums to keep count.

A week ago, I sent some money to a friend in Delhi, a driver who has struggled to find work. He messaged me a short time later on Facebook to tell me he’d received it, adding that he was, at the time, at one of the city’s crematoriums after a distant relative had died of Covid. My friend, who has spent enough time working for journalists to know what we’re interested in, then stood out the front for an hour, photographing and videoing bodies arriving, and the sheer volume of cremations on the go. It was unsettling: for that hour, my phone pinged repeatedly, with each message heralding the arrival of a new set of bodies.

The true number of casualties may never be known.

The Covid crisis in India also presents what could be the first major challenge to the Quadrilateral Security Dialogue. Conceptualised as a security grouping, the Quad has swiftly attracted attention and hopes that it will be able to counter the regional threat of China’s domination, perhaps even as a kind of Asian NATO. However, India’s Foreign Minister S Jaishankar this month told the Raisina Dialogue that the Quad is about far more than security, having cooperated so far on wide-ranging issues, from counterterrorism, supply chains, higher education – and yes, vaccines. When his country’s Covid caseload blew up the following week, that vaccine cooperation was in scant view, with the US lambasted for continuing to withhold the raw materials needed for vaccine production.

Despite moving quickly to release the materials and send over plane loads of supplies in assistance, the Biden administration is in danger of losing that goodwill, with many Indians on social media criticising the US over its perceived self-interest. Australia, too, has sent over humanitarian supplies, including oxygen concentrators and personal protective equipment, but is dogged by its decision to shut down flights between the two countries – even for Australian citizens in India and their families. Many have pointed out that even when the UK and US reached their peaks in caseload numbers, flights were not banned. The crisis has, in this way, shone a light on the worst reputational attributes of three of the four Quad members: Australian xenophobia, US exceptionalism and Indian ineptitude.

I am fortunate that I haven’t lost any friends or family members. But the grief I feel is profound, and intensifies every time I look at social media and scroll the endless posts of people begging for help for hospital beds, ICU places, oxygen, remdesivir, money. But India, meant to be an emerging global leader, doesn’t need handouts – it needs better infrastructure and leaders who care about more than power. It needs a total systemic overhaul. The best thing its partners could do in this case would be to forever hold India’s leaders to account.

Show 1 Comments
Previous Article
State of mind: How Australians see the pandemic and efforts to help
Next Article
Australia keeps calm while China carries on