A religious festival has become a super-spreading event. The government knew the risk but didn’t do enough to stop it. 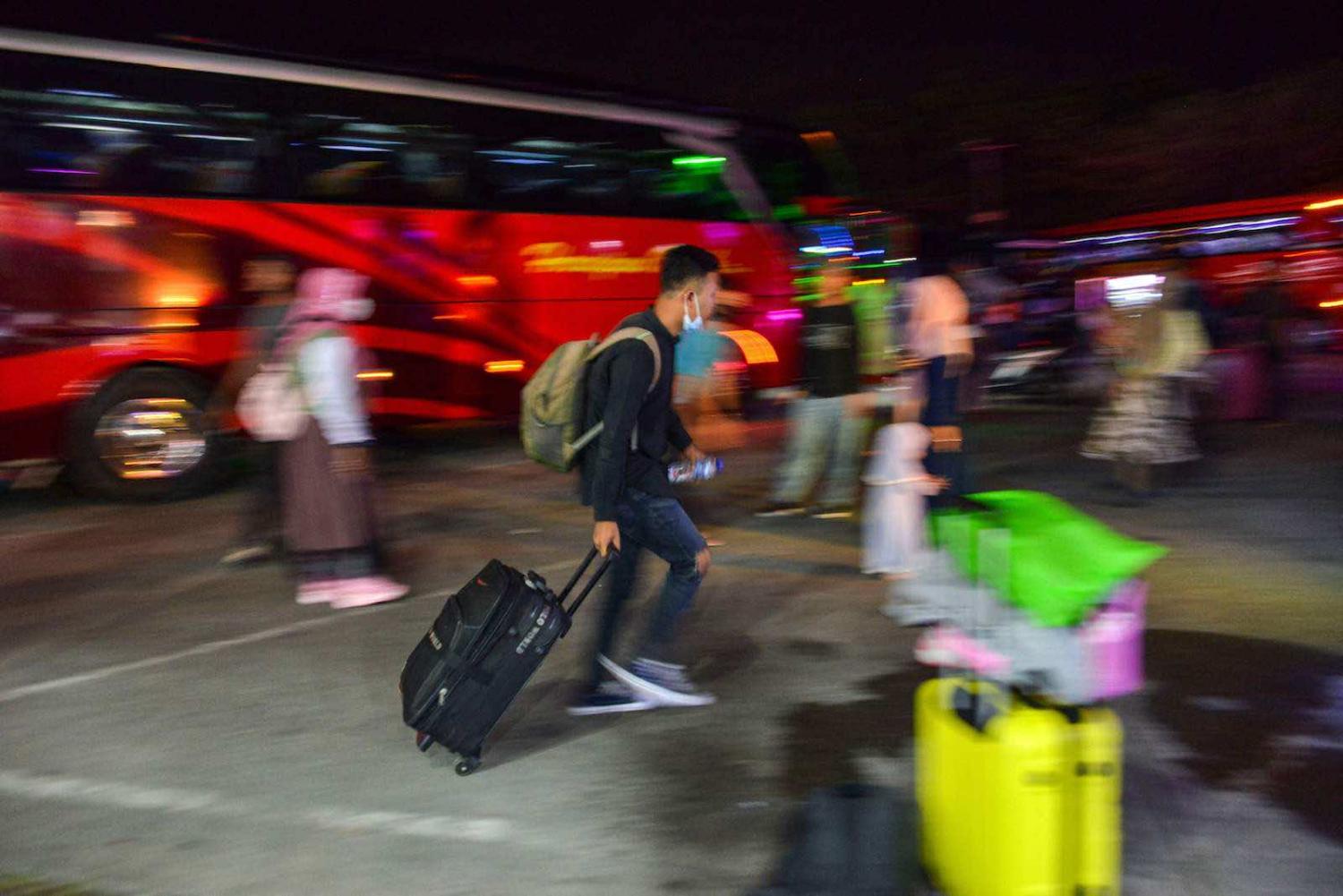 Passengers gather at a bus station during the homecoming, or mudik, ahead of the Eid al-Fitr celebrations in Banda Aceh, 3 May 2021 (Chaideer Mahyuddin/AFP via Getty Images)
Published 15 Jul 2021

Since mid-May, Indonesia has faced a massive surge in Covid-19 infections with the number of reported positive daily cases increasing fivefold. As of the most recent update from the World Health Organisation, Indonesia has recorded more than 2.5 million positive cases since the pandemic began and almost 70,000 deaths – while the actual number is thought to be far greater due to low levels of testing and inadequate contact tracing. Hospitals in Java are reportedly stretched to the limit, with doctors treating patients in makeshift tents set up in the streets. Oxygen supplies are running short across the country.

The government has blamed the more contagious Delta variant of the virus for the upswing in case numbers, citing the shipment of goods from India as avenues for virus entry. Yet local epidemiologists argue that infection rates in Indonesia have been massively underreported – with testing reaching only 40 per 1000 people ­– making it impossible to pinpoint an exact source of contagion.

Even if Indonesia’s current surge is the result of a more contagious variant, the government saw it coming. India’s second wave peaked on 8 May, a month after continuously breaking national records of reported daily cases. Yet this long-sounding alarm from Indonesia’s ninth-biggest source of imports seemingly failed to convince the government to devise an effective policy on restricting social gathering.

The obvious loophole was that many people circumvented the restrictions by simply travelling earlier.

The government’s lack of attention became especially apparent in the days leading up to the Muslim Eid-al-Fitr festival on 13 May. Islam is Indonesia’s dominant faith, and around 30 million Indonesians participate every year in mudik – returning to their hometown during the Eid holidays to gather with parents and their extended family, making it the most dangerous time of the year for virus transmission.

On paper, Indonesia did appear to impose strict measures to halt the flow of people. In March, the government announced bans for air and sea travel across the archipelago starting a week before Eid-al-Fitr, while land travel using private vehicles during the same period was only permitted for state and military-related purposes. Yet the obvious loophole was that many people circumvented the restrictions by simply travelling earlier.

The state-owned toll operator Jasa Marga recorded over 400,000 vehicles leaving the Greater Jakarta area on 5 May, one day before the ban took effect. Meanwhile, people shared stories of outsmarting roadside checks by smuggling themselves in the back of cargo trucks, venturing through smaller, police-free roads, or bribing patrol officers.

The government estimated over 1.5 million people had managed to return to their hometowns, half-heartedly admitting that the preventive measures were “not yet perfect”. But even this is likely a conservative estimate of the true number of travellers.

It is easy to put the blame on the ignorance and stubbornness of ordinary people. One of Indonesia’s most prominent epidemiologists even coined the term “herd stupidity” in response to the massive flow of mudik.

But blaming behaviour alone misses that even the most cautious of Indonesians have been experiencing Covid fatigue as the pandemic drags on. Nor is Indonesia alone. A study by Johns Hopkins University attributed frustration from cancelled activities, economic hardship and stress as drivers of second coronavirus waves across the world. Returning to your ageing parents carries an obvious risk to their safety, but it might sound like worth taking if you never know when you will see them again – or if you will still be able to gather as a family by next year’s Eid-al-Fitr.

President Joko Widodo’s administration might also have been reluctant to clamp down entirely on mudik-related activities because of the significant economic contribution historically made across this period at a time when the economy is under strain. The travellers and festivities regularly amount to a substantial injection of spending – the Eid holidays boost the circulation of cash money in rural areas, with visitors spending rupiahs in local retailers or aiding more-impoverished family members as a token of goodwill. This makes the annual occasion an essential period of income redistribution from urban economic centres to the rural districts – one that local governments would certainly be eager not to forgo.

Inconsistencies fuel arguments that Indonesia’s pandemic management during Eid-al-Fitr was too focused on mitigating potential damage to the economy rather than preventing risky social activities.

Yet money circulation during the Eid of 2021 was projected only to reach half the amount of previous years. So under the looming threat of recession, every act of consumption counts: Indonesia’s GDP shrunk by more than 2 per cent in 2020, while the tourism, transportation and hospitality sectors – those that used to see annual spikes during Eid holidays – have reported massive losses during the pandemic. This is perhaps why, despite the (ineffectual) travel bans, the government did not crack down harder on local crowds during Eid-al-Fitr.

These inconsistencies fuel arguments that Indonesia’s pandemic management during Eid-al-Fitr was too focused on mitigating potential damage to the economy rather than preventing risky social activities. Nor was this perception helped by Jokowi, as the president is widely known, choosing to attend an Indonesian Chamber of Commerce and Industry (KADIN) congress three days before belated emergency restrictions took effect in Java and Bali on 3 July.

Some, such as former Finance Minister Chatib Basri, have argued Indonesians “lack that discipline” to maintain social distancing and have endorsed mass vaccination as the way to simultaneously save lives and rebuild the economy. But this cannot be the only strategy at the expense of other initiatives to limit social contact. Indonesia’s vaccine program had only reached 5 per cent of population with a first dose by the first day of Eid. The country aims to vaccinate 65 per cent of its adult population, which some predict will take until 2023. That’s another two Eid holidays – and two potentially unmitigated Covid waves.

Why was a violator elected to a body responsible for protecting human rights?
The Interpreter 21 Jul 2018 07:00

Statelessness, Global Britain, and Indian demographics: the week that was on The Interpreter.
Michael Fullilove 28 Feb 2017 17:07

South Korea lost without its mojo

A year ago, the country seemed to be ticking along quite nicely. But now things are falling apart.