Amid a changed political landscape – and a pandemic – Rizieq Shihab’s return from Saudi Arabia raises much speculation. 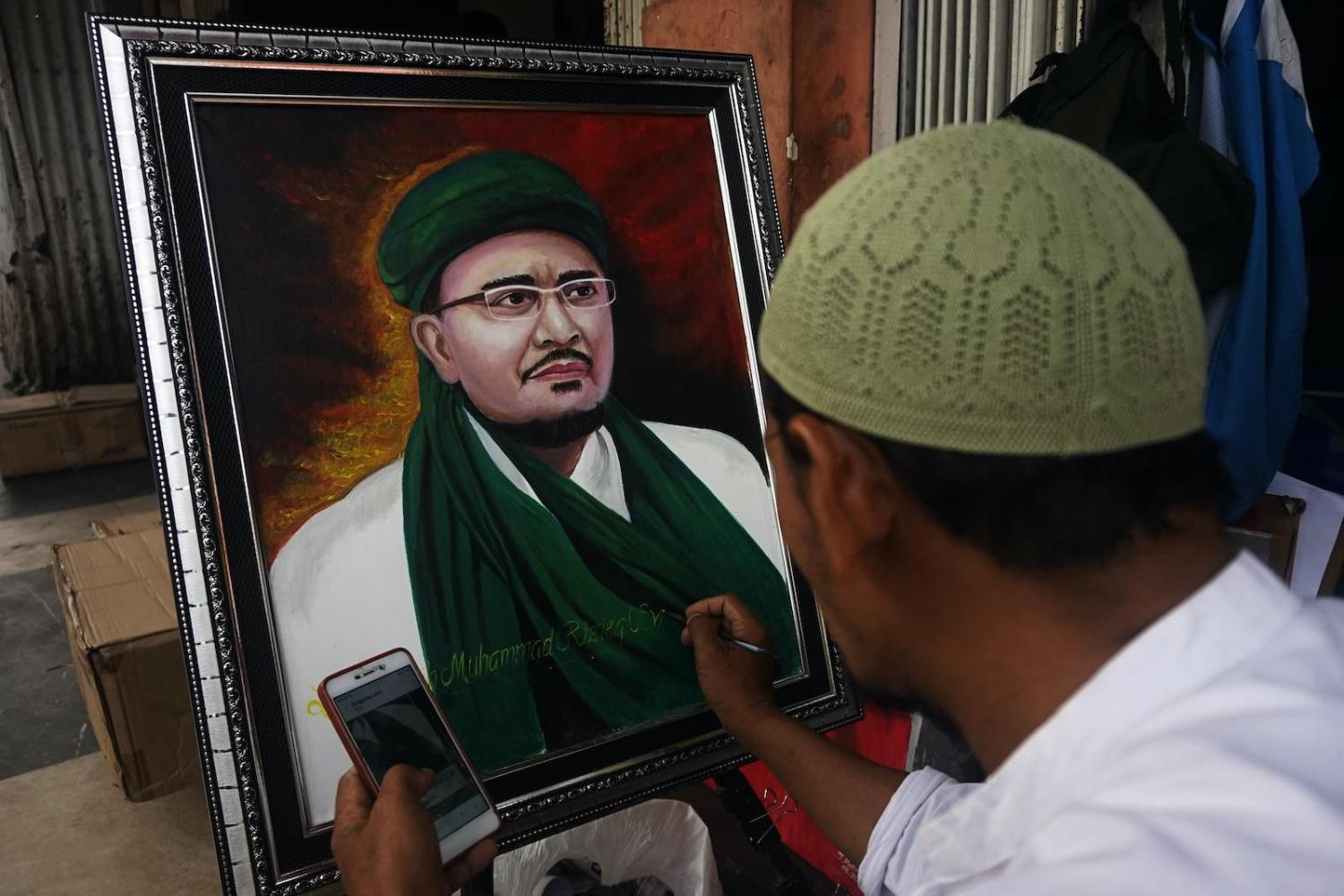 The return of Jakarta’s notorious cleric Rizieq Shihab portends more upset in Indonesia’s devastating year of pandemic and recession. But for the thousands of Islamic Defenders Front, or FPI, who gathered at the Soekarno-Hatta Airport just outside Jakarta to welcome the religious leader’s flight from Saudi Arabia last week, it’s a new beginning.

His influence has not waned during his time abroad. Rizieq’s arrival shut down roads to and from the airport, disrupting logistics and eventually leading to the dismissal of two chiefs of police from Jakarta and West Java for their inability to contain the crowds and violating Covid-19 health protocols.

Rizieq fled the country for Saudi Arabia initially on umrah, Islamic pilgrimage to Mecca, before staying on in self-exile in 2017, following pornography charges laid by the national police. A stream of false reports and rumoured returns since 2017 came to nothing, while the police withdrew the charges in mid-2018.

Rizieq rose to international infamy during the November 2016 protests to remove Jakarta Governor Basuki “Ahok” Tjahaja Purnama, the ethnic-Chinese Christian lawmaker who was eventually jailed on blasphemy charges. Rizieq’s command of the movement made him one of the more familiar faces of Indonesia’s shift towards conservative Islamisation.

At home, Rizieq had become well known during the 2000s for FPI-organised raids on bars and clubs in the capital during Ramadan. The group accused them of not being sufficiently observant of the holy month – high-profile stunts which earned him jail time.

A return to deep divisions is the subtext to Rizieq’s return – and the reason for the immediate courting of favour with the repatriated cleric by some.

Alongside the increasingly hostile and anti-secular stunts, FPI developed a wide-ranging program of social charities. The organisation has often mobilised before the famously sluggish government bureaucracies in responding to disasters, cobbling together massive donations to get money and other supplies to communities, It has also raised funds for issues such as Palestine, Syria and the Rohingya community. Anecdotes of Rizieq personally intervening in small-scale local disputes, such as arranging schooling for troubled young boys, are common, and they add to the cleric’s reputation as a man of the people.

Debate rages over the purpose of these humanitarian efforts. One argument says donation drives and community organising is a safe cover for the more insidious aspects of the FPI, including pushing for a Sharia-compliant state. Not quite, argues the opposing side. The humanitarian aspect of the organisation is wholly authentic and not incompatible with the political beliefs and aims of the FPI.

Regardless of what’s accurate – and it’s likely to be a combination of the two – the material benefits the FPI and Rizieq have provided for many in its community are real.

For those targeted by the organisation’s politics, particularly ethnic and religious minorities, the material damage is also deeply real. The anti-Ahok demonstrations of 2016 sparked the most heightened fears for the safety of Jakarta’s ethnic-Chinese community since the turmoil of 1998.

A return to these deep divisions, which had entered an uneasy stalemate in more recent years, is the subtext to Rizieq’s return – and the reason for the immediate courting of favour with the repatriated cleric by some.

Current Jakarta Governor Anies Baswedan rose to the top spot in the 2017 election after positioning himself as Rizieq’s chosen candidate. Anies’ designs on the presidential palace in 2024, when President Joko Widodo wraps up his second and final term, have been widely speculated.

The governor has faced immense criticism since the visit for putting his own political needs above the public health of the city. The visit violated Rizieq’s orders to stay at home and not host company following international travel, a measure implemented earlier in the year when Jakarta became the epicentre of the country’s Covid-19 outbreak.

Anies’ choice in visiting shows that the political currency the cleric still carries in the capital overwhelms everything else – including the pandemic. Made Supriatma, a visiting fellow at Singapore’s ISEAS currently based in Jakarta, wrote last week for news outlet Tirto that the power balances in place in Jakarta and national politics when Rizieq left in 2017 have changed dramatically. The addition of failed presidential challenger Prabowo Subianto into Jokowi’s second-term cabinet last year redrew the boundaries.

“Rizieq probably wants to be playing kingmaker,” Made said by phone. “But I think he might also have an eye for the vice-presidency. He knows that he’s not going to be president because there’s no vote for him right now. His number [of supporters] is very small, but his voice is very big.”

That voice will be on display early next month, Made adds. The largest anti-Ahok demonstration of 2016, known as 212 for its date of 2 December, has been marked each year with commemorative events in the form of mass prayers and protests against various governments. This year’s event will go ahead, with the Rizieq drawcard certain to override fears of a fresh Covid cluster.

Previous Article
Back to the future: Will Biden’s Asia policy come full circle?
Next Article
India heads towards economic autarky

Is enough being done to look after international crews aboard “flags of convenience” ships and to maintain global trade?
Jonathan Pryke 10 Dec 2019 06:00

Friction between the panel and audience and Australia’s climate change policies was on display – and plenty more, too.