A new defence pact marks a stronger partnership for countries driven together by shared values and regional dynamics. 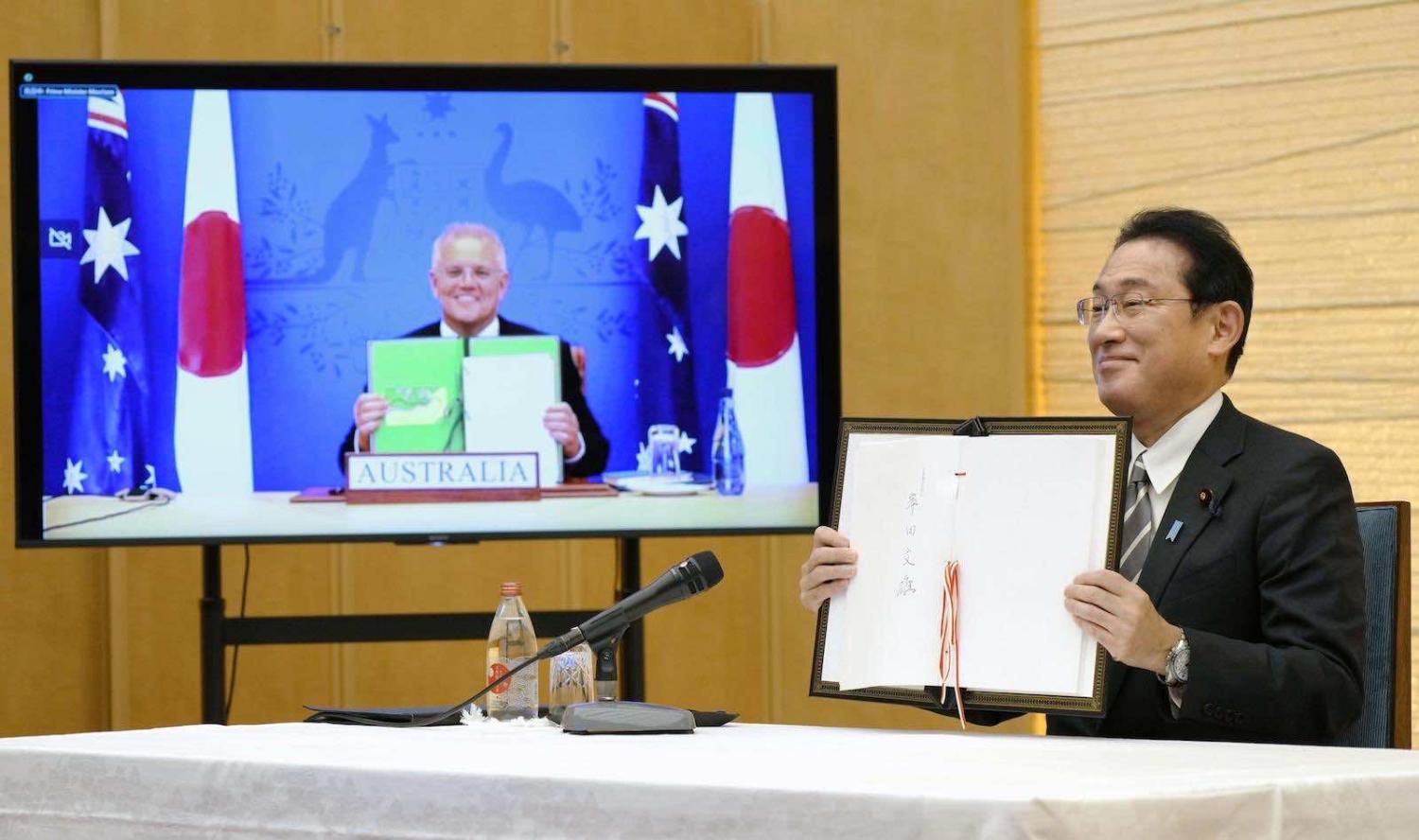 Japan and Australia this month formally signed a “landmark” Reciprocal Access Agreement (RAA), establishing a defence cooperation framework that will allow the stationing of troops in each other’s countries along with the staging of joint training exercises and disaster support.

The long-anticipated deal has been worked on since 2014 and amounted to the most significant security pact that Japan has inked with another country since the 1960 Status of Forces Agreement with the United States. It was concluded during a summit held virtually on 6 January between Australia’s Scott Morrison and Japan’s Fumio Kishida after the latter cancelled all overseas visits to deal with surging Covid-19 cases in Japan.

The “quasi-alliance” between Japan and Australia has blossomed in recent years amid heightened geopolitical tensions and rising competition in the Indo-Pacific. Both countries share concerns over China’s assertiveness and expanding maritime activities in the East and South China Seas. Australia-China relations have deteriorated in recent times, with China imposing economic and diplomatic sanctions, particularly in response to Australia’s call for an inquiry into the origins of the Covid-19 virus. The longstanding territorial dispute between Japan and China over Senkaku/Diaoyu islands has also intensified.

During the RAA’s lengthy negotiation, concerns over whether Australian personnel would be subject to Japan’s death penalty surfaced as a sticking point

At the same time, China remains an important economic partner. Japan has continued to maintain constructive dialogue with China, and have recently reached an agreement to launch a military hotline to deescalate tensions and avoid conflicts. Australia has signalled its willingness to resume talks with China – although senior level ties remain frozen.

Japan and Australia are also members of the Quad grouping along with the United States and India. Nevertheless, despite being US treaty allies, Japan and Australia share a degree of unease over the American commitment to remain active in the region, and have sought to work together to keep the United States engaged. Japan’s then Prime Minister Shinzo Abe and his Australian counterpart Malcolm Turnbull helped resuscitate the Trans-Pacific Partnership deal (now known as the Comprehensive and Progressive for Trans- Pacific Partnership) after the Trump administration withdrew abruptly in 2017.

US President Joe Biden has taken steps to reassure its allies, moving away from unpredictability of the Trump years. However, given its deep partisan divide and potential distractions by the pandemic, Washington’s focus on the region cannot be taken for granted.

A stronger partnership with Australia aligns with Japan’s efforts to play a more active role in regional and global affairs. Japan has incrementally expanded its security policy for decades and in 2015 the Abe government reinterpreted the pacifist Article 9 of the Japanese constitution, passing new security laws that expanded Japan’s Self Defence Forces’ range of activities, including participation in collective self-defense to support its allies.

Japan’s defence spending has also increased steadily in the past decade, with the recently approved defence budget for fiscal year 2022–23 reaching a record high of 5.4 trillion yen.

The success of the Japan-Australia partnership could depend on their ability to maintain the momentum to cultivate long-term trust and familiarity. Japan and Australia already share common democratic values such as freedom and the rule of law, but more can be done to deepen understanding of their respective domestic contexts and internal workings. The two countries face similar critical challenges such as climate change and pandemic recovery, and are pursuing broader cooperation in developing technology-led responses to achieve decarbonisation and net zero emissions.

Hurdles remain in military relations. Even the longstanding ties with the United States are complicated by local community resentment in Japan about environmental degradation and crime associated with US military bases, compounded by recent anxiety over Covid-19 transmissions among troops. During the RAA’s lengthy negotiation, concerns over whether Australian personnel would be subject to Japan’s death penalty surfaced as a sticking point. Japan and Australia likely reached a compromise on this issue, but it must be resolved sensitively in practice to avoid public backlash from both sides.

Increasing engagement at the community level and expanding people-to-people exchanges can help encourage mutual understanding and goodwill in each country. It is also important to promote public awareness of each country’s strategic significance to the other.

Previous Article
Fear, loathing and infighting in Kazakhstan
Next Article
When no shots are heard around the world

France-Australia: Salving the wounds of AUKUS

After the crisis over the subs deal, both countries stand to benefit from a normalisation of ties.
Danielle Ireland-Piper, Robin Perry 5 Oct 2022 09:00

It helps to ensure feelings of respect and value infuse diplomacy – and the management of foreign relations, too.
Jane Golley 26 Nov 2018 06:00