Media blackouts and influence from the Kremlin are stifling anti-government protests in the Central Asian republic. 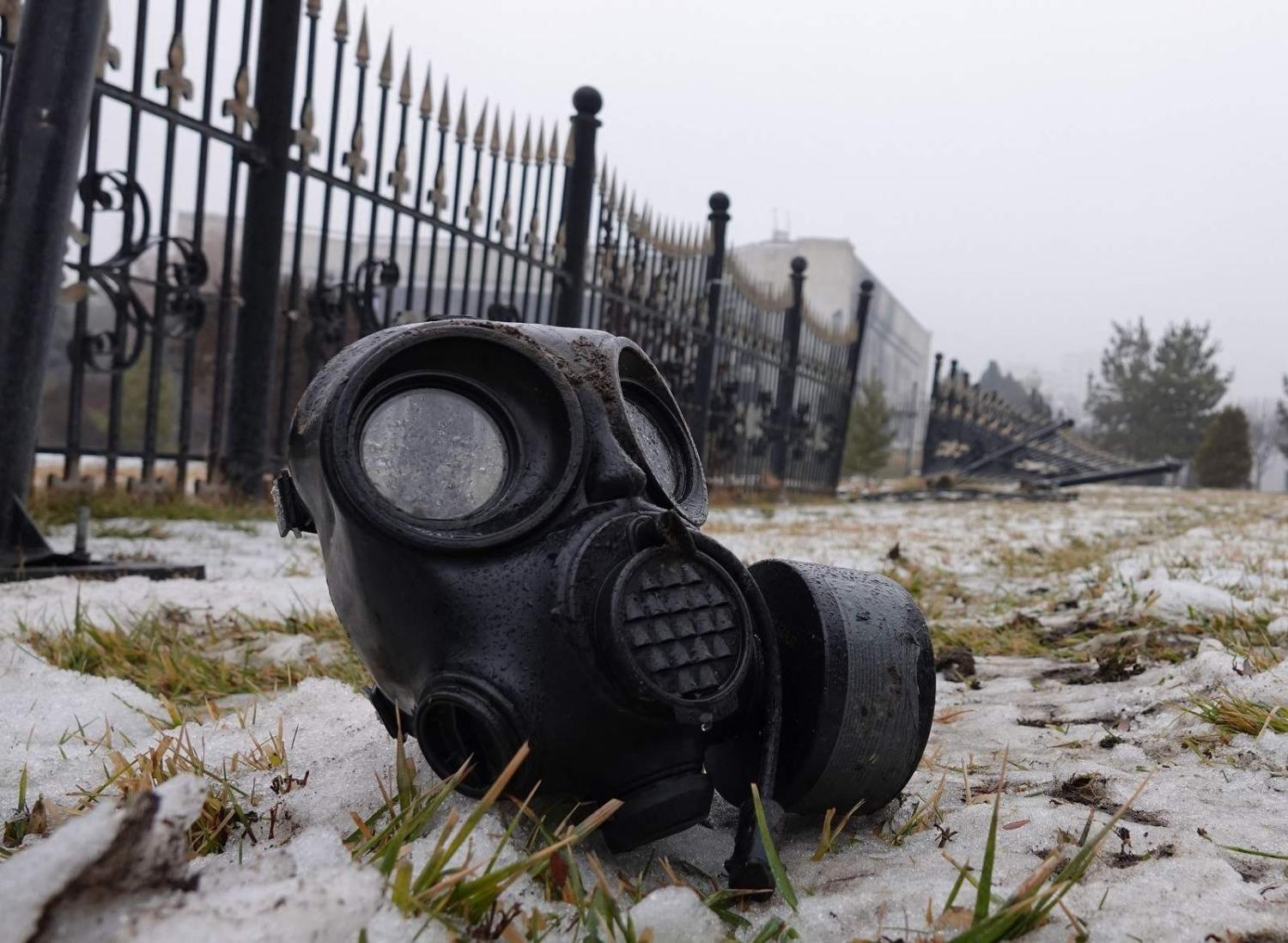 A gas mask in central Almaty is one of the few signs of protests that erupted over hikes in fuel prices, 7 January 2022 (Abduaziz Madyarov/AFP via Getty Images)
Published 11 Jan 2022     Follow @MSewillo

Over the course of barely a week, the normally placid Kazakhstan, best known in the West for being the unwilling object of humour in the Borat films (and perhaps also for being home to approximately 15 per cent of all Bitcoin mining), has endured a maelstrom.

Events began on 2 January with protests in the western oil town of Zhanaozen, instigated by widespread anger at the surging cost of fuel (this is a good explainer) and, despite the country’s immense resource wealth, stagnating living standards.

Briefly, it seemed as though President Kassym-Jomart Tokayev was considering conciliation. He quickly promised to rescind fuel price rises, accepted (or perhaps demanded) the resignations of his cabinet and prime minister, and announced that he would replace the still-influential former president of almost three decades, Nursultan Nazarbayev, as head of the powerful National Security Council.

According to official sources, more than 160 people have so far been killed and 8,000 detained.

Despite these efforts, the protests jumped local containment lines, spreading to larger cities including the country’s commercial capital, Almaty, and adopted broader demands for political reform. Violence quickly escalated. Tokayev instructed his security forces to “fire without warning” to quell the protests. According to official sources, more than 160 people have so far been killed and 8,000 detained. Other sources estimate an even greater death toll.

On Friday, Tokayev tweeted that “20,000 bandits”, many of whom were from outside Kazakhstan, were launching an assault on Almaty designed to overthrow his regime. It seemed typical of the blatant misinformation issued by authoritarian leaders intent on legitimating violence against their own people.

Emerging evidence, however, suggests that at least some of the violence could be an eruption of intra-elite factional infighting.

Over the weekend, the Kazakh intelligence agency announced that it had detained its former head, Karim Masimov, on suspicion of treason. Danil Kislov, a Russian national who runs the Central Asia-focused Fergana news agency, has speculated that the chaos on the streets of Almaty and other large Kazakh cities is the manifestation of a power struggle between factions loyal to Tokayev and former president Nazarbayev, who ruled Kazakhstan for almost 30 years until his replacement by Tokayev in 2019. He added that Nazarbayev’s nephew appeared to be playing a major role in instigating the protests.

Kislov’s account is supported by a local human rights activist who says he took part in what was initially a peaceful protest in Almaty until the arrival of an “unruly mob of what seemed more like thugs than the kind of people – students, bookish dissidents and middle-class malcontents – who usually turn out for protests in Kazakhstan.”

It must be stressed that credible news on the ground is scarce. Authorities have shut down most digital communications, major airports have been sealed off, and at least some foreign journalists have been prevented from entering the country. However, it appears that events in Kazakhstan are more complex than the narrative that had already been established in the minds of many outside observers – that of a thuggish despot meeting calls for modest political reform with bullets.

Yet again, the Kazakh people have been deprived of their right to author their own future.

Whatever the true origins and motivations of the protestors, it is obvious that Russia, always keen to prop up compliant autocrats in its sphere of influence, is exploiting the opportunity to enhance its own influence in Kazakhstan. On 5 January, Tokayev issued a call for assistance from the Collective Security Treaty Organisation (CSTO), a six-member regional security bloc headed by Russia. Despite the CSTO having never actively deployed troops in a member state, and its charter stating that intervention is only permissible if a member state faces an external threat, the group quickly agreed to assist. A government official estimated that around 2,500 foreign soldiers, drawn from the six member states, were to be deployed.

A spokesperson for Tokayev claimed that CSTO troops “will probably stay for a week” in Kazakhstan. If this is true or not remains to be seen. However, Russia – perhaps to its own surprise – has been handed a great boon: its southern neighbour, with whom it shares the world’s second-longest border, has signalled that it is willing to draw closer to the Kremlin in search of security.

As of Monday, peace – of a decidedly cold sort – appears to have been restored. In an address to the CSTO, Tokayev claimed victory against opposition forces while reiterating his claim that the protests had been hijacked by “terrorist” and extremist forces.

Despite the immense confusion of the past week, two conclusions seem clear. The first is that, yet again, the Kazakh people have been deprived of their right to author their own future. This is especially poignant when considering that, at least initially, protestors were making genuine calls for political reform. The other, which is sure to attract more attention from outside observers – including in Ukraine – is that the Kremlin, having moved decisively to save the Tokayev regime, is poised to wield more influence along its frontiers.

A cultural change in the way Australia’s approach to the world is formulated and prosecuted.
Andrew O'Neil 14 Aug 2017 10:26

The prospects of North Korea using nuclear weapons are greater than generally acknowledged.
Mercedes Page 18 May 2022 15:00

As authoritarian challenges loom, more transatlantic cooperation on technology should be welcome news for Australia.