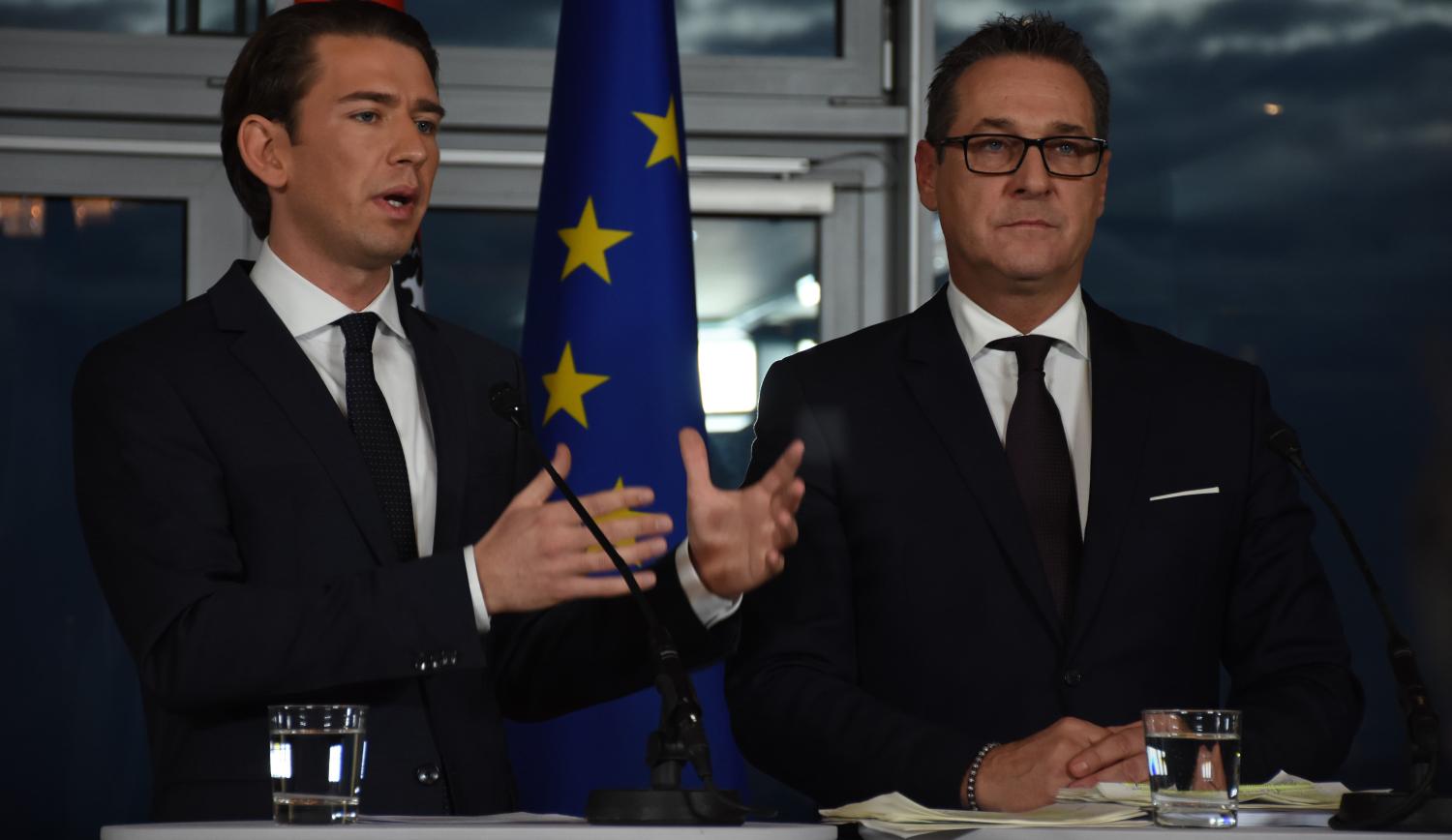 Austria’s far right Freedom Party (FPÖ) who was sworn-in just before Christmas as part of the Austrian government issued from legislative elections last October, is very right wing. Steeped in a brown past, it makes no bones about authoritarian leaning, anti-immigrant positions.

In the European Parliament, the FPÖ deputies proudly sit with those of Le Pen’s National Front and other extreme right-wing parties. A ‘friendship agreement’ with Putin’s United Russia-Party remains despite the party’s governmental responsibility and the open Nazi nostalgia of charismatic party founder Jörg Haider, killed some time ago in a car accident under obtuse circumstances, still lingers. An FPÖ campaign slogan read ‘Abendland in Christenhand’, the German rhythm of which is untranslatable but signifies a worthy counterpart to the Islamists cry of ‘liberating Arabian lands from Christian crusaders’.

Moreover, wily FPÖ chair Heinz-Christian Strache appeared to have gotten the better of his senior coalition partner, the young and inexperienced Prime Minister Sebastian Kurz, in obtaining some key ministerial portfolios such as Interior, Defence and Foreign Affairs.

Rather like Donald Trump with his Mexican wall, the FPÖ has, on the first day in office, announced that German speaking inhabitants of the Italian South Tyrol would obtain an Austrian passport, in a direct reference to the 1930s slogans ‘Heim ins Reich’ (back to the home country) of the Nazis. Unsurprisingly a sharp Italian rebuke followed, pointing out that Austrian law heretofore has not allowed dual citizenship and asking if the same would apply for all Turkish citizens living in Austria.

However, protests to this second inclusion of the FPÖ in an Austrian government, both internally and officially from Western European EU governments have been subdued. Is this an ominous sign that right-wing national populism has become generally accepted in European governments?

Not necessarily. Kurz had in fact built into the coalition agreement a few safeguards, especially with regard to future Austrian policy within the EU. New Foreign Minister is Karin Kneissl, an independent former diplomat. Her portfolio has been shorn of all EU responsibilities which Kurz reserved for his own job as PM. Kurz already has also categorically excluded any popular vote on ‘Öxit’, despite the pronounced FPÖ-preference for referenda. Quite to the contrary, both Kurz and Strache have underlined in their initial common policy declaration a strong adherence to EU membership, including its development – provided, that is, European immigration policy remains to stifle economic emigration through defensive and preventive policies already on African soil.

This is a pretty safe bet. The furious political backlash from the uncontrolled wave of immigration in 2015-16 is still very much alive in the memory of European politicians across the board. The challenge for the EU at present is rather to find a place on the international table where the future of Syria and its displaced persons are decided, and secure respective guarantees in exchange for major Western payments for reconstruction that surely won’t come from Russia, Iran and Turkey, the main responsible parties for the Assad induced quagmire.

The litmus test for the Austrian government will instead come in the form of its future, yet also deeply historic role, as a bridge builder between East and West in Europe. If Kurz wants to be a respected figure in the new drive for more integration in Europe, currently led by Macron and awaiting the German co-lead, he cannot risk being seen in an embrace with the Victor Orbans of the East, but rather as their stern disciplinarian much as the Hapsburgs were in the past.

Previous Article
A turning point in US economic relations with China
Next Article
Aid and development links: Children in war, Asia’s economic integration, Yemen and more

Xi, Orwell and the language of Chinese politics

Xi is not fostering a cult of personality, but a cult of the Chinese Communist Party.
Lydia Khalil 10 Sep 2021 10:00

The many consequences of a clear blue day on 11 September, 2001

The butterfly effect of the global war on terror has had far-reaching impacts on the freedoms it was meant to defend.
Khang Vu 10 Apr 2020 10:00