As Julie Bishop exits, how far have women come in world affairs?

The number of women in senior international roles is unmatched for Australia and the challenge is to drive to parity. 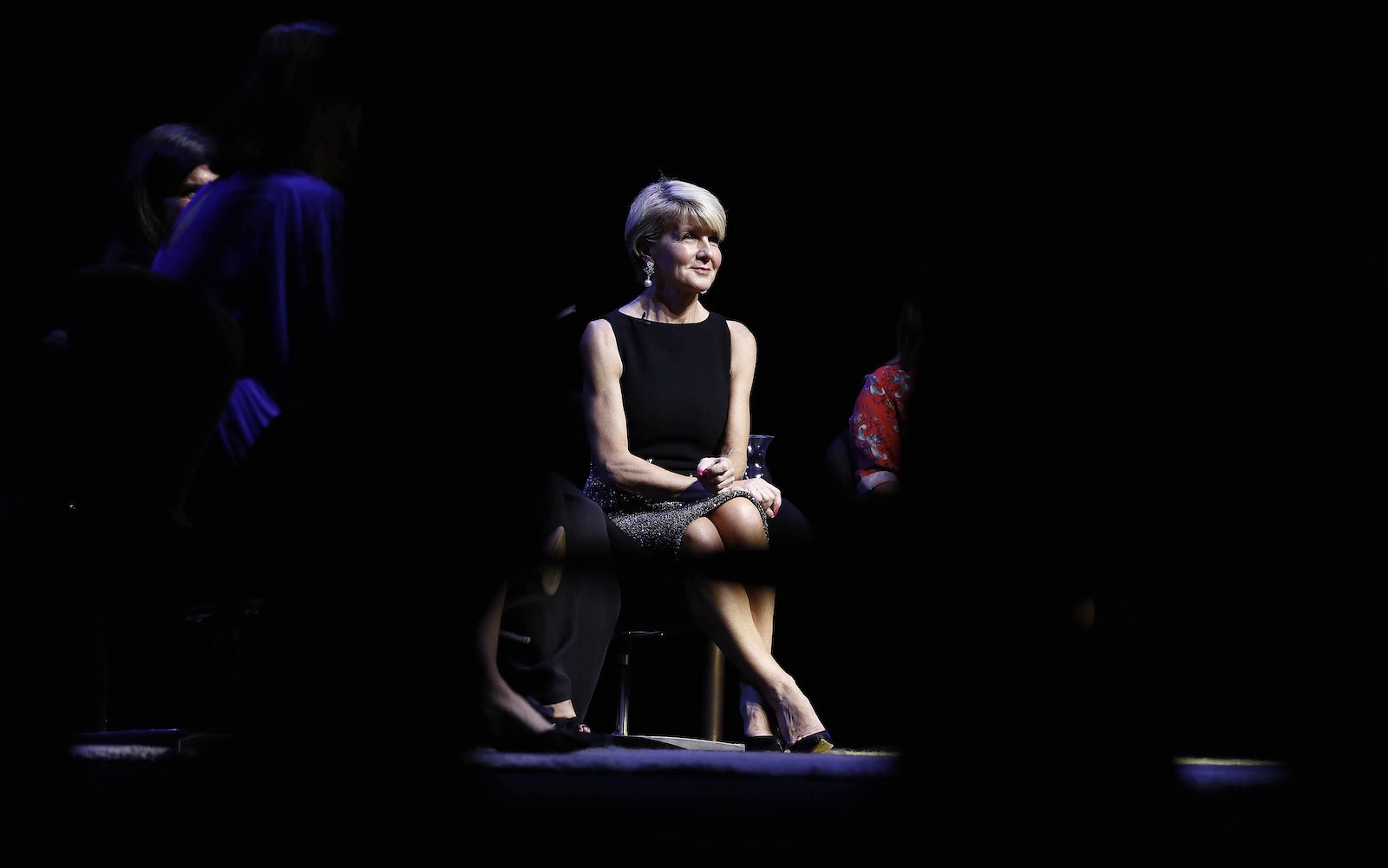 Last week, Julie Bishop sat for her last week in parliament. The past decade has seen momentous highs for women in Australian foreign policy, from the appointment of Bishop as first female foreign minister, to Julia Gillard leading international delegations as first female prime minister. For the first time in Australian history, women have not only been on the sidelines watching these decisions internationally play out, they have made them.

Yet, the lows have been pervasive, with a frustrating continued marginalisation of women’s voices, and discrimination and sexism within the field. Coinciding with the historically significant timing of Julie Bishop’s appointment as Foreign Minister, Tony Abbott thought to appoint her as the only woman in cabinet.

With the federal election due to be called any day, now is an opportune time to reflect on the women leading Australia’s foreign policy apparatus. Lest they be overshadowed by the quick passage of time, Australia’s gains ought to be noted, and continued challenges highlighted.

Australia’s foreign policy history regarding women is at best patchy, at worst, downright discriminatory and exclusionary (remember the marriage bar?). Foreign service and security roles have long remained the most male-dominated spheres within the government. This is despite the fact that women’s representation in decision-making improves collaboration and consensus, lowers interstate violence, and produces more durable decision-making.

Australia is not alone. As of 2016, men dominated an incredible 85% of all diplomatic and ambassadorial positions globally, and occupy almost 70% of foreign affairs ministerial jobs and 92% of ministerial positions in defence and veterans affairs.

Australia now stands at a critical juncture, with women on the cusp of equal representation in some of our foremost agencies.

Australia now stands at a critical juncture, with women on the cusp of equal representation in some of our foremost agencies. In the last year, women have jumped from comprising 27% of overseas representatives within the Department of Foreign Affairs and Trade, to over 40%, with a further goal of 43% of the Senior Executive Service by 2020. The change is particularly rapid considering that women have been entering DFAT in equal or greater numbers since 1985 – over 30 years. Would such rapid change and the continued focus on equality have been possible without the key leadership of Bishop and DFAT Secretary Frances Adamson, in particular, to push for progress?

Much of the progress made started from specific policy decisions. In 2015, DFAT launched the Women in Leadership Strategy, the first such strategy to look into the reasons why women’s career progression within the department was not equal to men’s. The next year, Bishop launched Australia’s first Gender Equality and Women’s Empowerment Strategy across foreign policy, economic diplomacy and development programs.

Just prior, the Australian Human Rights Commission handed down two damning reviews on gender harassment and discrimination within the Defence portfolio, contributing to the establishment of the Defence Australian Public Service Gender Equality Strategy Action Plan 2016-2019. Although research I have conducted found some criticism that each subsequent review overtakes the recommendations of the prior, there are more eyes on foreign affairs agencies than ever before. Even the Australian Federal Police’s (AFP) International Operations division operates under a Gender Strategy, now in its second iteration, indicating gender is a focus across the range of agencies representing Australia internationally.

One of Bishop’s strongest legacies from her time in the foreign minister’s job, together with the New Colombo Plan, was the 2017 Foreign Policy White Paper. It was not only the content but the context that was significant. The audience gathered at the time of the launch included Australia’s first female Defence Minister since federation in 1901, Marise Payne, Australia’s first gay female and first Asian-born federal minister, Labor’s Penny Wong, and Australia’s first female DFAT secretary, Frances Adamson.

Gender inequality undermines global prosperity, stability and security. It contributes to and often exacerbates a range of challenges, including poverty, weak governance and conflict and violent extremism. Australia’s foreign policy pursues the empowerment of women as a top priority.

Ahead of the election, quiet concern can be heard about what might happen when these women who have been so key to Australia’s recent foreign policy move on? What will be the effect of losing Bishop, and potentially Payne, too, if the Coalition fails to get re-elected? Will Labor continue to elevate the profiles of women in our international relations through Wong and others?

Far from being pigeonholed into certain “soft” portfolios, these women have begun the work of a more inclusive and rigorous foreign policy.

While the past few years could not yet be counted as a feminist dream, there has been a growing recognition of gender in international affairs and Australian foreign policy in particular. Hopefully this progress continues, but what appears sure it that it is increasingly difficult for international affairs to disregard women. Simply put, more eyes are now watching.