As UN Secretary General, his most difficult tests was to handle American hubris and pursue the goal of a just world. 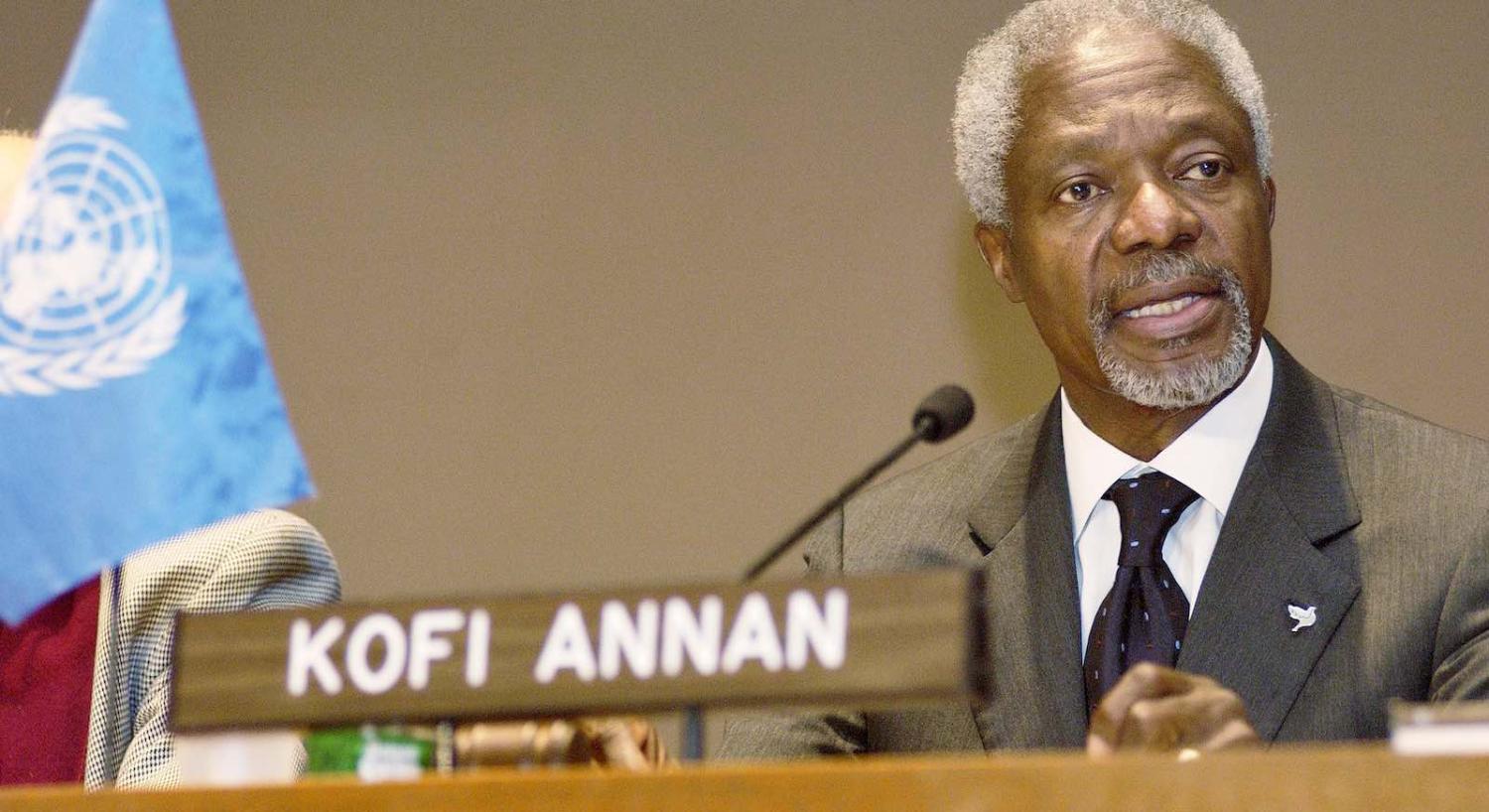 Those concerned with global peace and justice are grieving the death of Kofi Annan.

Annan was elected UN Secretary-General in 1996 after a vigorously contested election campaign. Boutros Boutros-Ghali from Egypt had been denied a second term by US opposition in the Security Council. There was consensual agreement that an African should be allowed to complete that continent’s ten-year term. A Sub-Saharan had the strongest chance. Having worked in the UN Secretariat throughout his career, Kofi Annan was well known and perceived as a welcome alternative to “The Pharaoh”.

Annan was the most gracious person I have ever met in public life, dedicated to human wellbeing and seeking peaceful conflict resolution.

In office, Annan chose outstanding staff and they served him with devotion. He also made wise senior appointments to the Secretariat. He recognised the need for reforms, planned them consultatively, and made many organisational improvements, for example by strengthening arrangements for collaboration between the organisational silos within the system.

Annan also made his own position more manageable by creating a position of Deputy Secretary-General to take over administrative activity; and by reducing the number of Under-Secretary-Generals and CEOs who reported to him.

His concern for leadership of the UN staff was illustrated by his compassionate handling of the 11 September 2001 attacks. Secretariat staff shared the shock, grief and anxiety of other New Yorkers. Fortunately, only one UN staffer was killed by the collapse of the Twin Towers, but many staff had children at schools where parents did not come home on that Tuesday evening. On the Wednesday, there were 11 threats to the UN, all of them false alarms, but evacuations continued.

Annan quietly and effectively addressed a packed UN staff meeting in the General Assembly hall on Friday morning. He picked up such themes as the horror of the attack, solidarity with the host country, and the enhanced importance of the UN’s role. In following days, he visited departments, meeting those most directly affected and speaking to groups.

Annan’s effectiveness as a policy leader is widely acknowledged. His book of collected speeches, We The Peoples: A UN for the 21st Century demonstrates the breadth of his principled commitments, and the strength of his goal of inspiring effective action. The subjects extend from increasing the effectiveness of the UN; through inclusive development; gender equality; controlling greenhouse gas emissions; seeking security through peace; turning “swords into ploughshares”; strengthening human rights as “the very heart of the UN’s mission”; and building the concept of Responsibility to Protect.

His skills as a manager are less well known. I had responsibility for leading preparation of a Special Session of the General Assembly on social development held in Geneva in June 2000. When reporting to him earlier in the year I presented a quick overview of both the substantive and organisational plans. He listened attentively, asked questions, made a few suggestions, and the briefing was completed in a little over half an hour.

He wanted the Special Session to be innovatively decisive. The conference made 40 or so fresh decisions, one of which was to set a global target for halving serious poverty by 2015. This became the first of the Millennium Development Goals, the establishment of which was one of his great achievements.

Amongst his most difficult tests was handling American hubris. Annan persistently attempted to dissuade the Bush Administration from unprovoked aggression against Iraq but finally had to say publicly that the 2003 invasion was illegal under the UN Charter without Security Council authorisation.

To address the consequences, he established the High Level Panel on Threats, Challenges and Change. This recommended strengthening the criteria with which the Security Council should evaluate proposed military action, and then as Secretary General proposed those to the General Assembly. This was rejected but existing Charter provisions were reaffirmed.

Of course, his principled stance was condemned by many people in the US, but by far fewer in the rest of the world. He had been a leader of the critique of the Iraq war.

Annan was dedicated to strengthening inclusive dialogue. We naturally invited him to open the second UN World Youth Assembly in Porto, Portugal in 1998, but he had to deal with a crisis in New York the day before and was expected not to be able to attend. However he flew overnight, arrived at 8.30 am, in time to be briefed, and then gave an inspiring address.

He challenged the participants by saying that youth are often told that they are the leaders of tomorrow, but “the world needs your leadership today”. He elaborated with concrete examples. He received an intensely enthusiastic standing ovation and the conference immediately responded by starting active planning. He went on to open the first world youth ministers’ conference in Lisbon next day.

Annan was the most gracious person I have ever met in public life. He was dedicated to human wellbeing, and to seeking peaceful conflict resolution. He was remarkably generous with his time, was an inspiring speaker, and was a disciplined leader. He was both principled about goals and pragmatic about means, while maintaining a hopeful vision of a peaceful and just world.

As required, he outstandingly “embodied the principles and ideals of the Charter”.

Professor John Langmore was Director of the Division for Social Policy and Development in the UN Secretariat in New York for five years starting from January 1997.

The EU should use the tools at its disposal to find short-term fixes to the crisis; a Turkey-style deal is clearly not that.
Shaun Cameron 22 Sep 2021 10:00

The fabled Thai waterway meant to bypass the Strait of Malacca has been mooted for centuries. Could its time have come?
Peter McCawley 26 May 2017 09:12

G7: A European summit with a global agenda

At international meetings of this kind, especially with China absent, the views of the US still tend to be hard to resist.