Leslie Cheung was known as the “Elvis of Hong Kong” and his legacy shows LGBT+ issues remain very much taboo in Chinese culture. 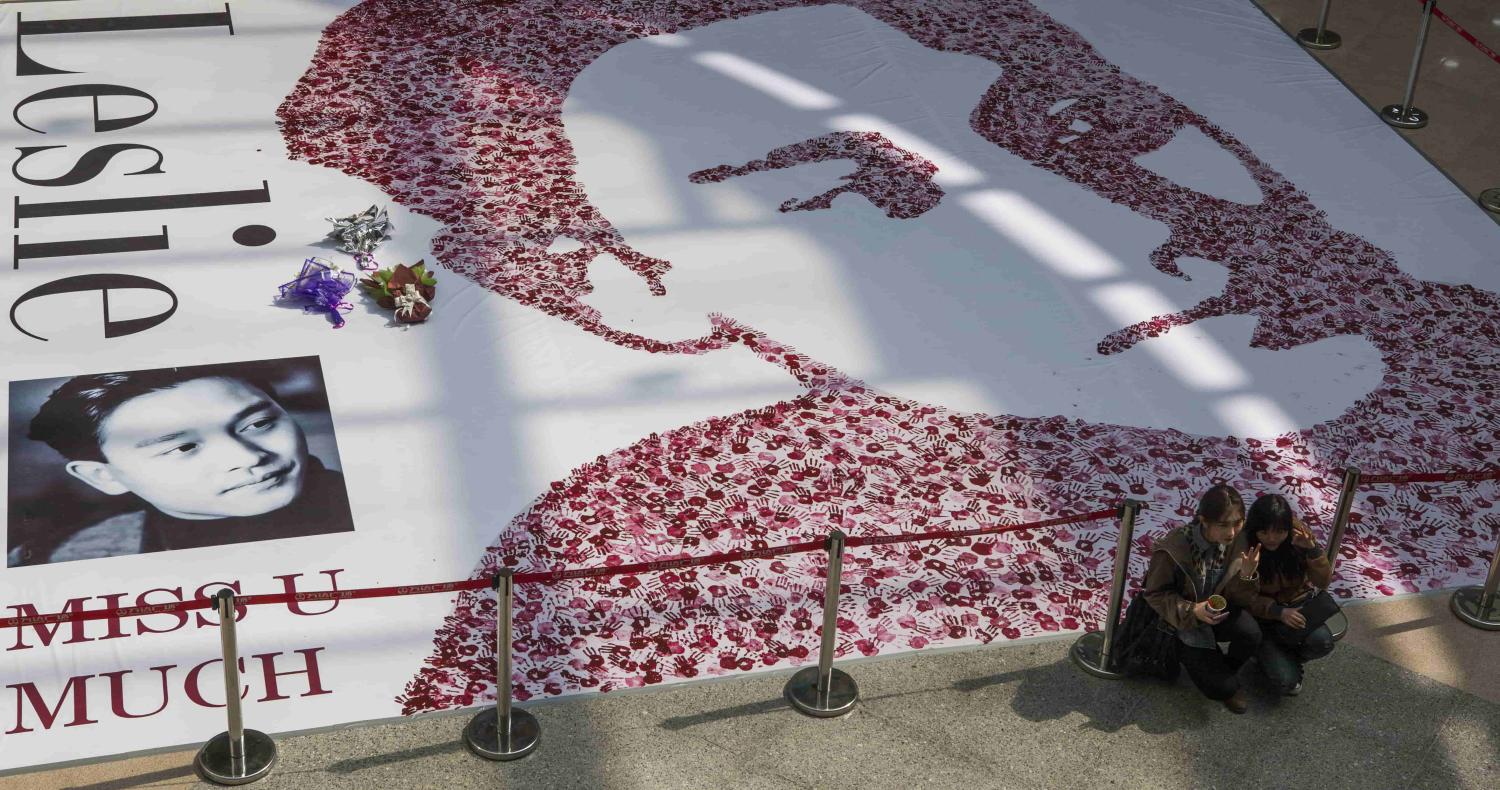 I first heard Leslie Cheung’s voice when I was five years old, sitting in the passenger seat of my parent’s car. A Cantonese song came on the radio: “Let me hide from the bustle of life / What is the mood like in heaven? / What new scenery will I get to enjoy?” I asked my dad who was singing, and he said, “It’s me, of course. I’m a famous singer, didn’t I ever tell you?”, and he laughed and laughed.

Of course, it wasn’t my father singing. Although little is known of Leslie today among the millennial children of Chinese-Australian migrants, his influence in Hong Kong and China is undeniable. Like a lot of artists, and now more than ever in the age of social media, it is impossible to divorce Leslie’s work from his personal life. His fluid sexuality and battle with mental illness has been scrutinised intensely by the media. Leslie was one of few openly gay Hong Kong celebrities to use his profile to champion LGBT+ issues.

Until 2001 homosexuality was listed as a mental disorder in China, and despite rising awareness of LGBT+ rights, homosexuality in China is still technically illegal. In 2015, a Chinese advertising campaign titled “Love Is Not A Choice” was heavily shared via social media. Members of China’s LGBT+ communities, however, continue to face significant barriers when it comes to fighting for their rights.

The lack of education within China and relentless censorship of art and popular entertainment featuring “controversial” viewpoints have placed the rapidly developing country with a booming economy at the mercy of government when it comes to LGBT+ issues.

The birth of a superstar

Leslie Cheung rose to prominence as a hugely successful pop icon in 1980s, and is often referred to as the “Elvis of Hong Kong”. As his pop career blossomed, Leslie’s private life and sexuality was closely scrutinised. In 2000 he collaborated with fashion designer Jean Paul Gautier to put on a concert, the “Passion Tour”, which was at once acclaimed and condemned by the media for its androgynous connotations and unabashed onstage use of cross-cultural drag.

Leslie suddenly announced his retirement from pop music in 1989, at the age of 33. Afterwards, he funnelled his energy into his film career, winning numerous accolades, including the 1991 Hong Kong Film Award and the 1994 Hong Kong Film Critics Society Award for Best Actor.

As he developed as an actor, Leslie evolved to play openly gay characters almost exclusively. Notably, in the 1997 film Happy Together he gave a moving performance as the lead character in a turbulent romance between two men.

When I saw the 1993 Chinese drama film Farewell My Concubine for the first time as a teenager, I found it truly haunting. Leslie Cheung plays the main character Douzi, a performer in a Beijing opera troupe during the era of Mao’s mid-twentieth century China, who is in unrequited love with his fellow male star Shitou. The story follows the pair’s complicated friendship as the nation undergoes turbulent changes, and culminates in Douzi’s suicide in the finale.

And as I watched the scenes play out, I couldn’t believe what I was seeing. I couldn’t believe that this was the China I’d grown to know by-proxy of my parents, couldn’t believe the film’s stark portrayal of suicide, homosexuality, violence perpetrated under the Cultural Revolution. I was confused by Farewell My Concubine’s expression of such a flawed and fragile humanity, because while I was wise enough to know those nuances to be real, I didn’t expect them to be China.

It was no wonder that I was shocked. In fact, the film was actually pulled from theatres and banned shortly after its original premiere. International outcry followed, as “Farewell My Concubine” had won the coveted Palme d’Or at the 1993 Cannes Film Festival, the only Chinese-language film to win this award. Leslie Cheung had also won the 1994 Japan Film Critics Society Award for best actor for his performance. Film bureau officials eventually lifted the ban on public screenings of the movie, but made several censorial changes to scenes depicting homosexuality, effects of the Cultural Revolution, as well as the suicidal elements in the crucial finale.

Censorship of these issues persists today in China. On 30 June 2017, the official China Netcasting Services Association (CNSA) released a new regulation banning portrayals of “abnormal” sexual conduct, including incest, sexual perversion, sexual assault, sexual abuse, sexual violence, and same-sex relationships. This is one step in a series of government-led efforts to tighten political and administrative control over social media and mass communication. China’s social reforms and rapid growth in recent years has necessitated regulation of their ever-important digital domain.

To strip China’s people, which as of 2018 constitute 18.5% of the world’s total population, of such vital expression can lead to further isolation of already marginalised groups.

Death of an icon

Leslie died by suicide on 1 April 2003, following a long battle with depression, at the age of 46. His death shocked the entertainment industry and the Asian community worldwide. Rumours spread like wildfire, so much so that Leslie’s family had to issue a statement requesting privacy and asking the tabloids to not sensationalise the icon’s sexual orientation and reasons for suicide.

The news devastated Hong Kong, and memorials were held across the world to mourn the loss of one of Asia’s biggest talents. For an entire month, Leslie’s story dominated Hong Kong newspapers, and his music filled the local airwaves.

Ten years after the icon’s death, commemorative events in Hong Kong featured a 6-metre statue of Leslie and a structure made of 1.9 million paper cranes created by Leslie’s fans all over the world.

While the public had evidently accepted Leslie’s sexuality, it must be remembered that his rise to fame occurred before his coming out. A recent survey revealed that only 15% of LGBT+ identifying people have come out to their families in China, compared to 59% in the US. It is clear that for everyday citizens, LGBT+ issues, including mental health, remain very much taboo in Chinese culture.

The growth of China’s middle class and their increased spending power is a known phenomenon today. Censorship of online broadcasting is not only detrimental to free speech, but also incongruous with modern legal/sociocultural frameworks and will hinder the development of Chinese society. The lack of education around LGBT+ rights and mental health issues can be considered dangerous when applied to what McKinsey predicts by 2020 to be a 400-million-strong Chinese middle class.

This has also bled into the collective mindset of Chinese-Australian migrants who find themselves in the peculiar position of having their children grow up in a different world to the one they knew. Migrant’s children who identify as LGBT+ may have the language and agency to describe how they feel about their humanity, but feel an unbearable loneliness because the same words can’t be used to sway their parents.

In 2017, during the same-sex marriage survey, conservative Chinese communities in Australia vocally campaigned for a “No” vote. Dr Pansy Lai (founder of the Australian Chinese for Families Association) appeared in a “Vote No” advertisement. While the same-sex marriage vote shone a spotlight on the Chinese-Australian community, the dissonance among second- and third-generation Chinese-Australian millennials is an area that has not been discussed enough.

There is hope. While Leslie might be deemed timid by today’s standards, he is a huge LGBT+ icon to many. Nigel Collett, author of Leslie’s biography, said in an interview:

For his day, he was the bravest man in Hong Kong’s entertainment world. At the end of his life, he had given Hong Kong the message that it didn’t matter whether you loved a man or a woman, as long as you loved. That was revolutionary back then.

Furthermore, things appear to be slowly improving in the Hong Kong entertainment industry. Denise Ho became the first mainstream female Hong Kong singer to come out of the closet and advocate for LGBT+ rights. Anthony Wong, another prominent Cantopop singer, publicly declared in 2012 after a concert series:

My father knew about Leslie’s sexuality. Everyone did. Interestingly, he was always able to separate the talented Cantopop singer whose music he loved from the controversial sexual politics that Leslie represented. It was as though Leslie’s queerness was but a tidbit to him, a quirk, not to be taken seriously and never to be understood.

Perhaps, in a way, Leslie never fit the mould of what Chinese society thinks a celebrity icon should be. Yet he broke ground and records like never before. Leslie was both an enigma and a legend of the most evolved form.

Fans gather every year on 1 April outside the Mandarin Oriental in Leslie’s memory. This year will mark the fifteenth anniversary of his death.

Brisbane will host the Olympics in 2032 but the starter’s gun has already sounded in the cost versus benefits contest.
Kerry Brown 27 Jun 2017 08:45

Never has the hand of the Beijing state apparatus been more visible in the city.
Federica Caso 24 Apr 2020 09:00