Life in a host city, at home, live-streaming the Olympics

Watching on from a tatami floor in Tokyo, the sport is great, the geopolitics just as good. 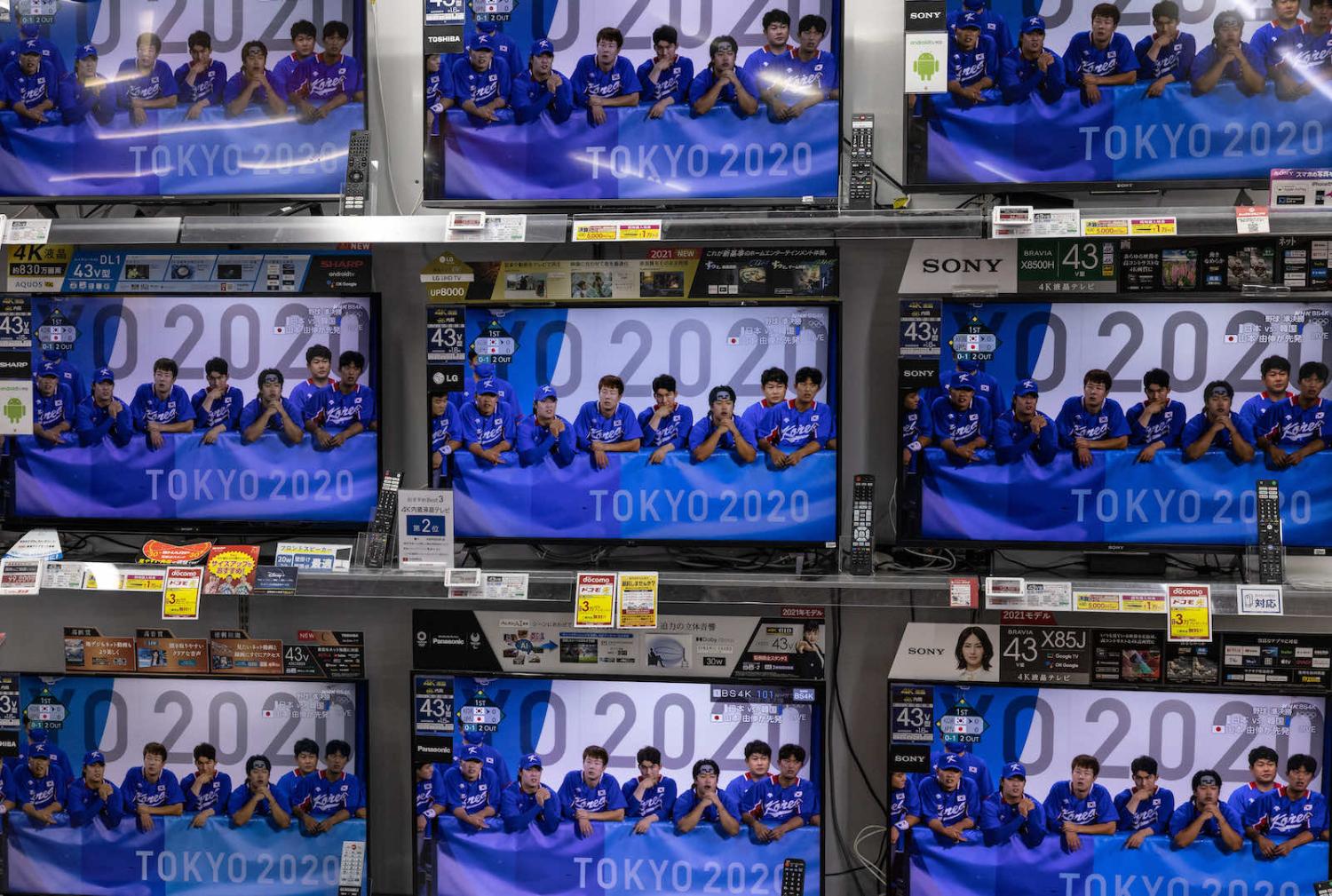 One of the unexpected benefits of studying abroad for an extended period is the new perspective it brings to understanding your own country. Certainly, my first two years of study abroad in Tokyo the 1980s, in pre-internet times, taught me things about Australia that I didn’t know, like just how small we were on an international stage. News about Australia in the local press was rare, save the occasional gift of a koala or the fleeting fame of the frilly-necked lizard, and I soon learnt never read the cricket news written by someone who knows only baseball.

And while that academic experience would eventually set me on a path to investigate Australia and Japan more deeply, watching the Olympic Games from another country’s living room gives you alternative perspective from which to consider the “nation-state”.

It so happens that this is my fourth Olympics I have observed from my tatami floor. I was here in Tokyo when Los Angeles and Seoul hosted the games in 1984 and 1988 respectively, and began my present residency here in 2016, just in time for the Rio Olympics.

In my last dispatch, I conveyed the ambivalence I felt being here in the host city but due to Covid unable to attend any events. The sporting tragic in me always looks forward to an Olympic Games, becoming an instant expert in the splash left by the platform divers, for example, while the political analyst casts a critical eye over the whole event. The Tokyo Games will give us much to examine politically, both domestic and international, long after the Olympic flame has been extinguished.

There is plenty of pressure and expectation on the home teams at the best of times but the Japan-China rivalry started early in the Games with the original ping pong diplomacy.

Setting aside the politics for a moment (just a moment, this is the Olympics after all), the first thing you notice watching the Games away from “home” is that Japanese broadcasters tend to track the success or otherwise of the Japanese competitors. This leads to the discovery of hitherto unknown sports such as handball or Greco-Roman wrestling, sports which hadn’t garnered much more than a niche interest in Australia. In Games past, Japanese news focussed on judo or table tennis, and badminton. Now there’s a backyard hit and giggle I might have taken more seriously if I’d known of the Olympic potential. (As for skateboard riding teen me, we would have scoffed at the decks ever being considered an Olympic sport. Not to mention surfing, but I digress.)

And Trans-Tasman rivalries? A mere construct of antipodean proportions. But it wouldn’t be an Olympics without the (not so subtle) geopolitical games. Again, watching from outside Australia, probably highlights a few of those geopolitical “interests” we might not otherwise see.

Anyone interested in the politics of the East Asian region will be inevitably drawn to the competitions between China and Japan, South Korea, the team from Taiwan (competing under the IOC flag), and although we are trying to resist drawing any parallels (it is only sport after all), the overlay is there.

There is plenty of pressure and expectation on the home teams at the best of times but the Japan-China rivalry started early in the Games with the original ping pong diplomacy, a final between Japan and China in the mixed doubles table tennis. Having established a two sets to love lead, the Chinese team looked set to win but in a “fairy tale” comeback, the Japanese team ended up winning 3-2. Every match up since involving athletes from Japan, China and South Korea has involved a similar level of intensity.

China sits atop the medal table with just a few days of competition left, a position it no doubt wants to maintain. America is coming second.

As a long-term Australia-Japan observer, the “bilateral” match-ups have been must watch live-stream (since we can’t attend in person). The pressure on the softball team as the first team to arrive for a pre-Games training camp was intense. Media coverage from their departure in Australia, to their arrival in Tokyo, the bus ride to Gunma Prefecture where they were based, hoping on the one hand that nothing would “go wrong” but on the other, anticipating the first Covid “bubble” burst. As it turned out, their stay was a success and eventually led to some limited local attendance by spectators at training matches.

The appreciation shown by Japanese media when the Australian team unfurled large banners at the Athletes’ Village, was quickly overshadowed by the news of the return flight to Sydney and the athletes behaving badly (the New Zealand team a day later earned a special mention as well).

There is a lot to mine on the sporting fields (and pools) for more creative approaches to Australia-Japan relations but that might fill another postcard. Suffice to say, the yellow and red life guards spotted by the diving pool the other day were just a small reminder of the things we do well.

The volunteers along the promenade near campus hand out towels to passers-by to help us avoid heatstroke, more than a few of us have milled around the mini-cauldron on the Ariake “Bridge of Dreams”, and we know the Olympics have been happening, out there somewhere. The competition draws to a close over a weekend of deep significance to Japanese people (and others who aspire to a world of peace).  Given Thomas Bach’s visit to Hiroshima early on, many hoped that the IOC might agree to a request to hold a minute silence on the morning of 6 August. The request was turned down. It would be folly to mix sport, politics and peace, after all.

Links and stories from the aid and development sector.
Sam Roggeveen 8 May 2017 11:52

Although the experts who are downplaying the commercial significance of the C919 are not wrong, perhaps their frame of reference is too narrow.
Nick Bryant 13 Dec 2016 11:57