Ambitious Soviet reformer whose political career was defined by “perestroika”. 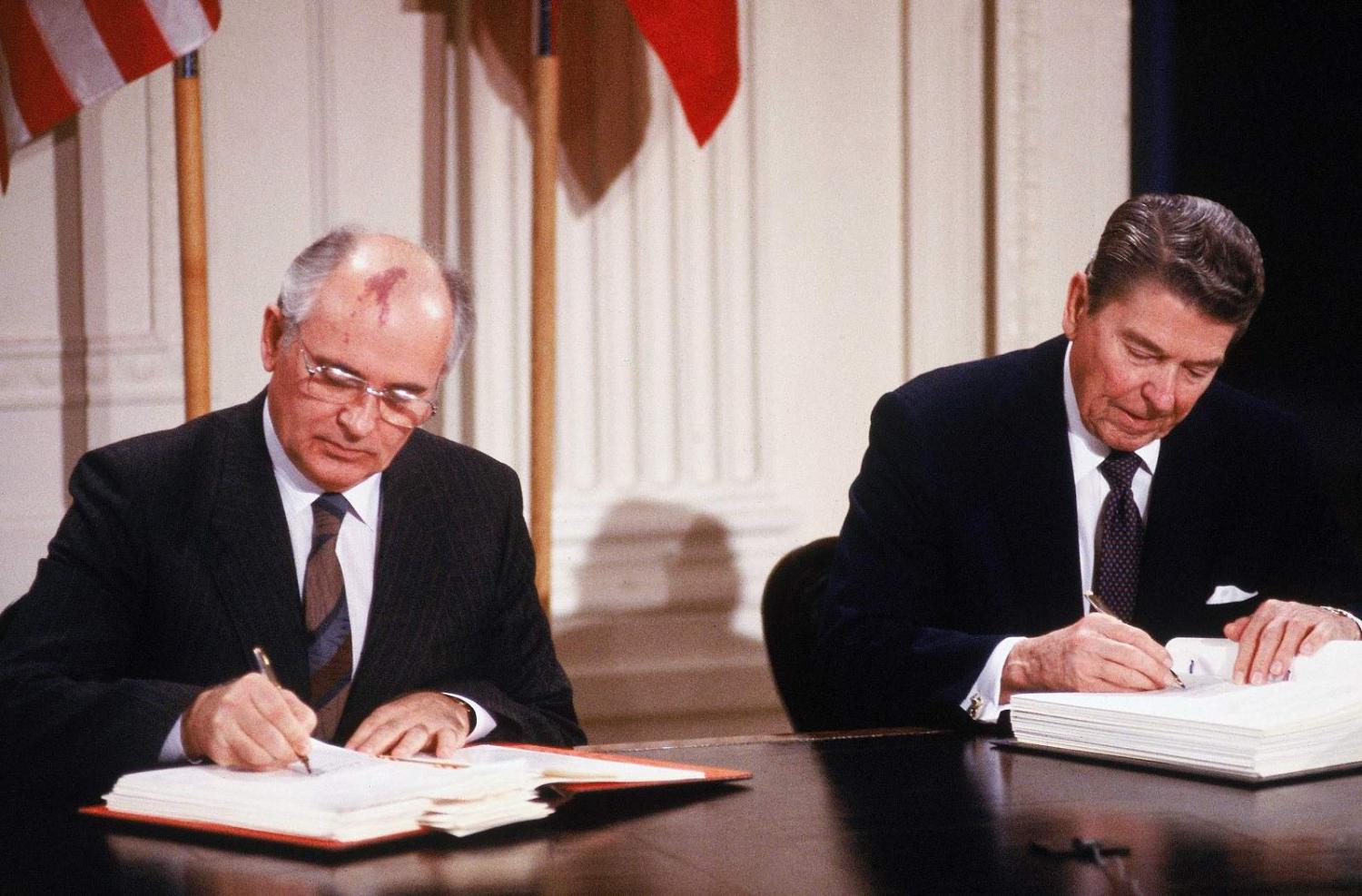 Upon becoming General Secretary of the Communist Party of the Soviet Union in March 1985, Mikhail Sergeyevich Gorbachev presented himself as the consummate leader: a party man, a charmer, a thinker, a pragmatist, a problem-solver. Under his stewardship, the Soviet Union would be reformed and reinvigorated. Instead, it disappeared. Unwillingly and perhaps unwittingly, Gorbachev, who has died at the age of 91, would become one of the most significant and consequential political figures of the second half of the 20th century.

As a student, Gorbachev pressed through the throngs of weeping mourners to catch a glimpse of Stalin’s corpse. Just over 30 years later, he would occupy the dead tyrant’s office.

Born to a peasant household in the North Caucasus in 1931, the Soviet Union into which Gorbachev arrived was riven by famine and terror, both of which touched his immediate family. Later, during the Second World War, his village was occupied by the invading German Army. But wits and a sparkling intelligence soon elevated the young Gorbachev to study at the prestigious Moscow State University (MGU). The timing was fortuitous: Joseph Stalin’s death in 1953 heralded a period of momentous, tectonic change in the Soviet Union. As a student, Gorbachev pressed through the throngs of weeping mourners to catch a glimpse of Stalin’s corpse. Just over 30 years later, he would occupy the dead tyrant’s office.

Those post-war years were also the Soviet Union’s halcyon days of social mobility. After graduating from MGU, Gorbachev’s rapid rise through the party ranks was facilitated by an ideology that had every interest in promoting the best and brightest from the Soviet Empire’s far-flung regions. He shone as the Komsomol (Young Communist League) chief in his home territory of Stavropol, quickly attracting the attention of would-be patrons in Moscow. Before long, he was appointed party boss of the whole region. But by the time he came to occupy the Soviet Union’s supreme office in 1985, these dreams of dynamism, movement and mobility were all but dead. As Gorbachev quickly came to realise, the Communist Party (CPSU) he had inherited was little more than a corrupt, cumbersome and inflexible bureaucratic machine. Whatever future promise might once have tethered the toiling Soviet population to the revolutionary party that claimed to speak in their name, by the 1970s the CPSU had withered into a sclerotic body that pursued nothing more than its own preservation. This was the comfortable, do-nothing, self-assuredness that Mikhail Sergeyevich would so dramatically upset.

As a cloud of radioactive particles from Chernobyl drifted over Europe, the dominos of the Soviet system’s failures fell.

Gorbachev brought with him to high office equal measures of energy and expectation. Indeed, it says a lot about the degeneration of the Soviet system that the 54-year-old General Secretary could be viewed as the very emblem of youth and vibrancy. The Politburo that elected Gorbachev as their leader had an average age of 70: the white-haired, grey-suited men (for they were all men) looking every bit the staid bourgeoisie they claimed to despise. Renewal, Gorbachev soon realised, would not suffice. What the world’s second superpower needed was reform. Thoroughgoing, fundamental reform. The Soviet economy would be made more efficient and receptive to people’s needs. Censorship would be eased. The victims of past injustices would be recognised. Agreements would be made on nuclear disarmament. Western leaders would be rendered partners, not antagonists. The party – and then the state – would be democratised. Before long, the humdrum Russian words “glasnost” (openness) and “perestroika” (restructuring) had entered the global political lexicon.

It was hardly smooth sailing. Reforms came in fits and starts. Gorbachev’s plans lacked both detail and cohesion. And, of course, neither the party nor the state felt any special compulsion to shed their sluggish habits. Reform of this magnitude demanded a brutal and uncensored reckoning with the Soviet Union’s systemic problems. And during the early hours of 26 April 1986, the profundity of these problems was revealed in the most catastrophic way at a nuclear power plant near Pripyat, some 150 kilometres from Kiev. As a cloud of radioactive particles from Chernobyl drifted over Europe, the dominos of the Soviet system’s failures fell: the malign secrecy, the hazardous infrastructure, the rampant environmental degradation and, most obviously, the culture of obsequiousness that had precluded all discussion of the country’s most pressing issues.

Post-Chernobyl, Gorbachev came to see his reform program as a matter of existential necessity. And the more ardently he pursued it, the more ambitious it became. Before long, he was advocating open competitive elections, a new decentralised Union and – most dramatically of all – a shift to a market economy. He and his followers aimed at nothing less than shattering the party’s monopoly over information, the economy, foreign trade and, of course, political authority. Soon, nothing would be left of the world Lenin had made.

Perhaps for the very first time, the Soviet Union had managed to generate a sense of goodwill among the populations of its satellite republics.

But it was not only at home that Gorbachev revolutionised socialism. Perhaps most consequentially, Gorbachev’s example galvanised the long-suppressed reform movements of Eastern Europe. In respect to the Soviet Union’s satellite periphery, the General Secretary’s diagnosis was in many senses an obvious one: the Soviet imperium in Eastern Europe now rested on little else than the threat of force. This he was determined to change. From now on, socialism would be legitimate, popular, and democratic.

The yearning for reform was contagious and given an added thrust by the fact that the change was emanating from Moscow itself. In previous instances, it had been reformers from within the local Parties who had become the lightning rods for social discontents – and antagonists for the Soviets. With Gorbachev, the situation was reversed: jubilant crowds cheered him as he toured the capitals of Eastern Europe, the General Secretary bathing in the adoration while his aged local counterparts mulled silently beside him. Perhaps for the very first time, the Soviet Union had managed to generate a sense of goodwill among the populations of its satellite republics. The irony, of course, was that the ideas that were radiating out of the Kremlin and across the socialist world included a firm policy of non-intervention. Now that reformers finally rejoiced at the prospect of Moscow meddling in their affairs, Moscow refused to do so. The satellites would be left to fend for themselves.

One by one, the Eastern European regimes fell. On 9 November 1989, Gorbachev did nothing while euphoric and defiant crowds marched through the Berlin Wall. His restraint was admirable (in June that year, he had watched in horror as the Chinese Communist Party had massacred hundreds of protesters at Tiananmen Square). For the West, 1989 was a moment of triumph and hubris. But for Gorbachev, Eastern Europe’s godsend became a tragedy at home. Nationalist movements within the Soviet Union itself threatened to tear apart the Empire. Meanwhile, Gorbachev’s old nemesis Boris Yeltsin began mobilising Russian nationalism to directly challenge the General Secretary’s authority. As events piled upon events, Gorbachev frantically grasped at the loose reins of his runaway carriage, only to encounter the unstoppable momentum of the forces he himself had unleashed. And for a system whose raison d’être was total control, this meant nothing less than political death. On 25 December 1991, an exhausted Gorbachev appeared on Russian television to announce the final demise of the Soviet Union. Looking a pathetic figure, he fretfully greeted his compatriots, gazed down at the script with which his restless hands fidgeted, and in the course of just ten minutes unceremoniously extinguished the final embers of the Revolutionary flame. The 20th century was over.

“Perestroika” had proved a catastrophe, becoming a synonym for the chaos, corruption and dislocation that accompanied the country’s turbulent marketisation in the 1990s.

After his fall, Gorbachev cut a homeless figure in Russia’s political world. “Perestroika” had proved a catastrophe, becoming a synonym for the chaos, corruption and dislocation that accompanied the country’s turbulent marketisation in the 1990s. In later years, the forlorn former General Secretary sought to salvage his shattered reputation by arrogating to himself the status of the elder statesman. Beyond Russia’s borders, he continued to be applauded for his humane, social-democratic outlook. But in his homeland, Gorbachev was more likely to attract vitriol than pity. Few remained to defend him. For the rest of his long life, he was burdened by the accidental revolution that history would forever bind to his name. Looking back at the collapse of the Soviet Union in 2018, Gorbachev’s sorrow was palpable: “I regret it to this day”, he sighed.

Covid-19 has allowed New Delhi to show a collaborative and constructive brand of diplomacy, instead of zero-sum rivalry.
David Crowe 12 Sep 2017 17:09

The persistent value of on-the-ground reporting

Nothing has emerged so far to replace a dedicated foreign correspondent with time to settle in and the financial stability to report in depth.
Graeme Smith, Joseph D. Foukona 21 Oct 2019 11:00