The US blocks a consensus candidate at WTO, Australian businesses offloading in Asia and the Ant float banned. 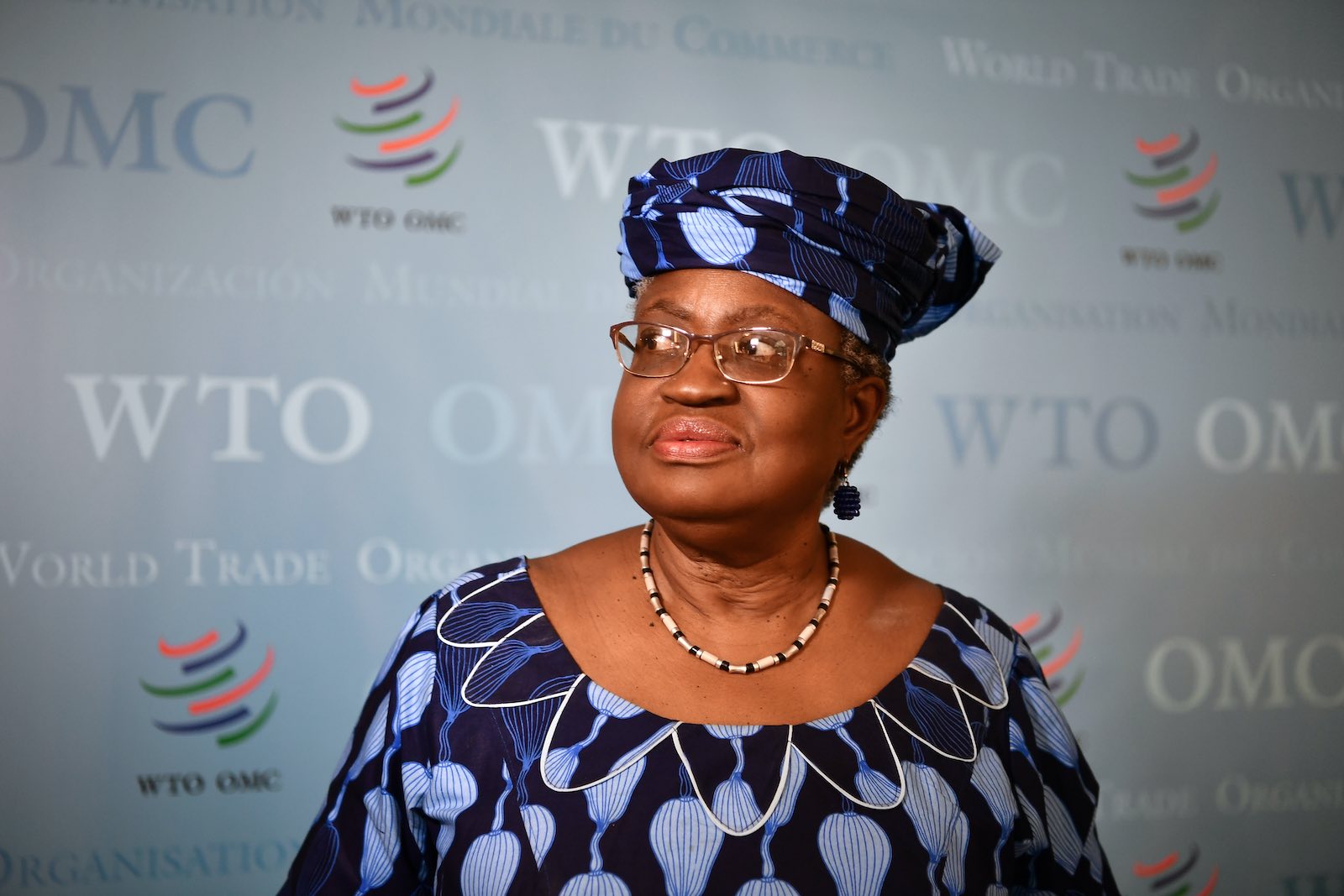 The leadership of the World Trade Organisation may be the first test of whether the world can move on with normal life amid the divisions and recriminations as the US recovers from a bitter election.

In one of its last international policy moves, the Trump administration last week stopped the appointment of Nigeria’s Ngozi Okonjo-Iweala as the WTO’s director general, despite her obvious credentials as the organisation’s potential first African leader and as a former finance minister and World Bank official.

More importantly, she had also emerged as the consensus candidate from the long process of finding a new WTO leader since the incumbent Roberto Azevedo’s early departure.

The laborious process of interviews with the potential candidates seems to have revealed more about the challenges ahead than potential solutions for an organisation at the frontline of the loss of faith in globalisation.

This impasse is hardly something that the expected incoming Joe Biden presidency is likely to pay attention to as it fights off election court challenges.

But Okonjo-Iweala reportedly had a strong base in about half the WTO members and became the likely winner with the support off the European Union last week. Nevertheless she still required consensus backing in one of the many old conventions from the Bretton Woods era of international institutions, underpinned by dominant but nonetheless enlightened US leadership.

US officials suddenly started backing South Korean Trade Minister Yoo Myung-hee as their preferred director-general last week. This was apparently based on a positive relationship developed with US Trade Representative Robert Lighthizer during a renegotiation of the Korea-US trade agreement.

This impasse is hardly something that the expected incoming Joe Biden presidency is likely to pay attention to as it fights off election court challenges, especially after the continued support for Donald Trump in traditional working-class Democratic strongholds where trade is a big issue.

So, whoever wins, with a politically combustible post-election atmosphere in the lead up to the inauguration in January, this would seem like the time for a consensus of countries which depend on a functional WTO – like Australia – to push ahead with the appointment of a new director general.

Japan, who of the strongest supporters of the WTO system, is in a particularly interesting position. It is reportedly wary of Yoo becoming the new director general due to the trade disputes which have arisen with South Korea on the back of old historical grievances.

But at the same time, Tokyo has been reluctant to publicly differ with the Trump administration on trade.

The Australian government’s economic diversification strategy has been confronted with some of the difficult realities on the ground with the announced sale of two longstanding mostly Australian-owned manufacturing businesses in Asia.

Building company Boral is selling its plasterboard business in seven Asian countries to its German partner Knauf. That, and the sale of Coca-Cola Amatil to Coca-Cola European Partners, means Australian-owned operations in Indonesia, Papua New Guinea and Fiji will also change hands.

These announcements come as recent reports by Asia Society Australia and the Business Council of Australia and then Asialink Business have urged policy reforms and better public-private cooperation to facilitate more Australian investment in Asia to take advantage of the region’s high economic growth.

And while the Federal government’s economic sovereignty strategy is mostly focussed on trade diversification after recent tensions with China, there is nevertheless a secondary focus on investment diversification. For example, one of the key new ideas in former senior diplomat Peter Varghese’s India economic strategy was to focus more on investment in India rather than trade. And the new Indonesia-Australia Comprehensive Economic Partnership Agreement contains significant investment concessions.

The three-decade old Boral and Coca-Cola Amatil Asian businesses have been through changing investment structures and geographic footprints over the years amid mixed financial performances.

But their disposal to foreign partners in each case underline the challenges facing the recommendations in the independent reports on Asian investment and the government’s diversification policy.

The sales follow the recent release of the first detailed survey of Australian offshore investment in 15 years by the Australian Bureau of Statistics, previously reported here.

It showed that the number of businesses in Asia had risen only modestly in that time and the proportion remains stuck at about 22%  of all offshore businesses, despite the many economic diplomacy initiatives over the years.

The data suggests that investment on the ground in Asia may be more important to exporting services to the region than to the commodities that have typically dominated Australian exports – but services are now seen as the potential higher growth market.

And the survey also revealed for the first time that the Australian subsidiaries of foreign multinational companies seem to be producing better financial returns in Asia than fully Australian owned companies.

Coca Cola Amatil and Boral’s Asia businesses don’t neatly fit into that statistical dichotomy. But it is ironic that their European or US partners/parents seem to think Asia offers better growth prospects than the directors and investors in the two Australian companies, which have half a century of Asian investment experience between them.

One of the biggest new globalisation dilemmas facing whoever wins the US election will be how to rein in the oligopolistic power of the new high-tech ecommerce companies without conceding ground to China’s equivalents.

But curiously China has partly provided the answer with its decision this week to stop the US$37 billion share market listing of Ant Group, founded by the country’s highest profile charismatic entrepreneur Jack Ma.

The banning of the Ant float seems to confirm that the Xi Jinping regime is concerned with preventing these e-commerce and social media groups from becoming more independent entities.

A crackdown on the market and political power of the FAANGs (for Facebook, Amazon, Apple, Netflix and Google) is probably more likely from a Biden administration despite the Democratic financial links to Silicon Valley. Although, Republicans still have their own issues with this new power elite.

The legal constraints being pursued all around the world – including by Australia’s own competition regulator – run the risk of ceding global ecommerce power to China’s own BATs (for Baidu, Ma’s Alibaba and Tencent).

But the banning of the Ant float only seems to confirm that the Xi Jinping regime is more concerned with preventing these e-commerce and social media groups from becoming more independent entities than allowing them to become genuine global giants.

Ma would appear to be particularly in the firing line because he dared to criticise governance standards in China in a speech in October.

New fintech players such as Ant have already challenged the financial power of the state-owned banks at the heart of the Chinese economy but would have been even more threatening if the stock market listing had gone ahead.

China has created genuine comparative advantages over the US with the rapid development of its e-commerce and information technology systems. But it has now made those innovative businesses – from Huawei to TikTok – look more like they are just arms of an authoritarian state.