The Indian PM goes to extremes to show off his fearlessness – and to run away from an avalanche of controversy. 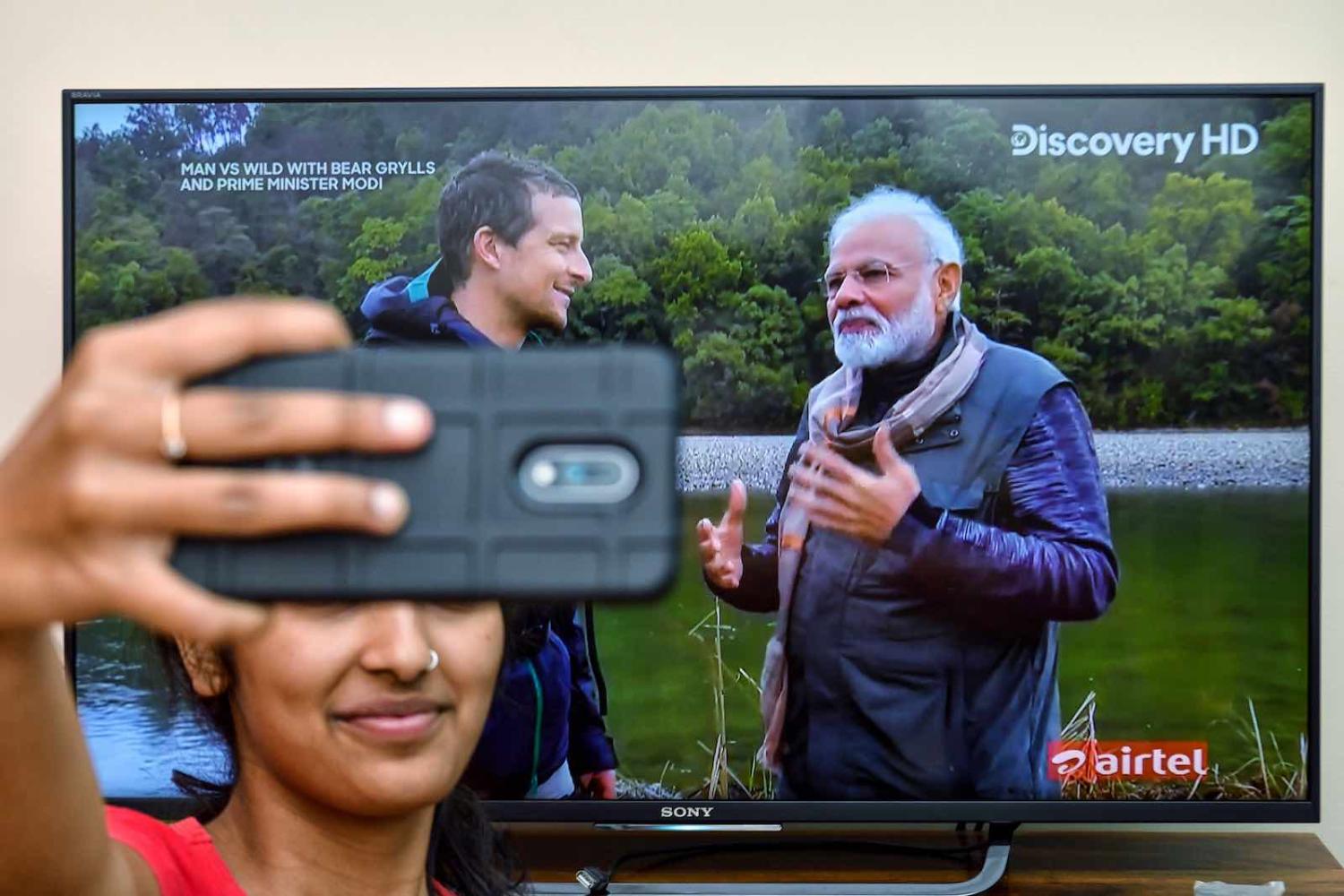 A fan in Bangalore snaps a selfie with the televised image of PM Modi (r) and Grylls (Photo: Manjunath Kiran via Getty)
Published 23 Aug 2019     Follow @pomegranitaa

One, a rugged survivalist with a penchant for striding through dangerous terrain, accompanied only by a television crew. The other, the man who holds the hearts, minds, and fates of 1.2 billion people in his clenched fists.

Indian Prime Minister Narendra Modi might not have a clearly articulated plan to steer his country towards economic health, but that’s possibly because he has bigger fish to fry. In his latest round of myth-building, Modi has made a startlingly unexpected, yet enormously watched, appearance on the Bear Grylls–fronted TV program Man vs Wild. The prime minister follows in the footsteps of Barack Obama, who trekked in Alaska with Grylls four years ago.

It’s somewhat fitting: Modi has modelled himself in the image of a lion ­– fierce, fearless, uncompromising, the king of the jungle. Marching side-by-side, the pair share awkward Hindi-English conversation as they seemingly go tiger hunting in Jim Corbett National Park in northern India.

It is, however, a slightly odd conceit, as tigers are woefully endangered in India, something that is highlighted throughout the 52-minute program, even as Modi brandishes a jugaad, or improvised, spear, made from a knife tied to a stick with rope, in the unlikely event of coming face-to-face with one of the beasts.

“My problem is that I have never experienced such fears,” Modi humblebrags to Grylls.

I am unable to explain it to people what nervousness is and how to deal with it, because my inbuilt temperament is very positive. I see positivity in everything, and because of that reason, I am never disappointed.

Modi’s Man vs. Wild appearance was announced a fortnight earlier and immediately piqued interest, along with bewilderment at the unprecedented and unlikely pairing. Viewers weren’t disappointed, treated to images of Modi sniffing elephant dung, being pushed through a river on a handmade coracle, trekking through high grass while discussing his modest childhood, and espousing the benefits of sweet neem leaf tea.

In a month when India has been in the global headlines for other reasons, it is a triumph of PR. In fact, the timing of the show’s debut on 12 August – right before Independence Day celebrations – was a stroke of genius, creating a diversion from political manoeuvring elsewhere for anyone who might take a dim view of his government’s actions, while giving his many millions of supporters further reason to cheer him on. Modi has a sharp and innate understanding of optics in politics: he knows how much mileage there is in stalking through a jungle alongside Grylls, presenting his views on everything from chai to conservation to his commitment to public service. For a politician looking to position himself as a virtuous yet hardened survivor ­– albeit with secret servicemen milling in the background ­– this is exactly how to do so. Think Putin on horseback with a dash of Gandhi.

And it appears the stunt paid off: Grylls has announced that the episode is officially the world’s highest-trending televised moment, with 3.6 billion social-media impressions – more than the Super Bowl, according to ratings information.

‘Officially the world’s most trending televised event! With 3.6 BILLION impressions!’  (Beating ‘Super Bowl 53 which had 3.4 billion social impressions.) THANK YOU everyone who tuned in!  #PMModionDiscovery #ManVsWild #india https://t.co/OvfRD9EIcq pic.twitter.com/1E0HwiI6ME

Meanwhile in New Delhi, India’s Parliament three weeks ago passed the National Investigation Agency (NIA) bill, which gives the government more powers to handle individuals and groups deemed to be terrorists, despite opposition concerns it could be used against activists. Parliament also passed the Right to Information (Amendment) Bill, which amends India’s official freedom of information legislation by altering some of the operational conditions of the Central Information Commission – specifically, changing the tenures of the information commissioners from fixed five-year terms to a timeframe set by the government. The opposition has claimed that this is aimed at watering down right-to-information conditions.

None of this would have been on Bear Grylls’ mind when he trekked with Modi through Corbett. Nor the reports of plans for detention camps in the northwestern state of Assam, where Muslims have already found themselves removed from citizenship rolls; nor India’s sudden annexation of Kashmir this month; nor a ratcheting up of tensions with Pakistan; nor the fact that China is apparently promoting Islamabad’s side to the UN Security Council.

Grylls was merely an unwitting cheerleader in the game of image-building: with Modi playing to an already rapturous domestic audience, and confirming his image of a tiger-thwarting strongman, a lion in a jungle with just a Bear for company.

Previous Article
Australia in the Gulf: The order-based rules
Next Article
A middle-power moment

Prime Minister Sharif has made it clear he wants to fight to the end, whatever the consequences. In such a fluid situation, army intervention can't be ruled out.
Michael Leach 20 Jan 2020 17:30

Instability looms as the largest party in the governing coalition abstains on the budget proposed by its own government.
Marie-Alice McLean-Dreyfus 9 Jun 2017 16:03

Taiwan: Is there a political generation gap?

Through analysing a range of survey data, we see a convergence among all age groups on attitudes towards relations with China.