There is no mask over the regime’s true intentions. 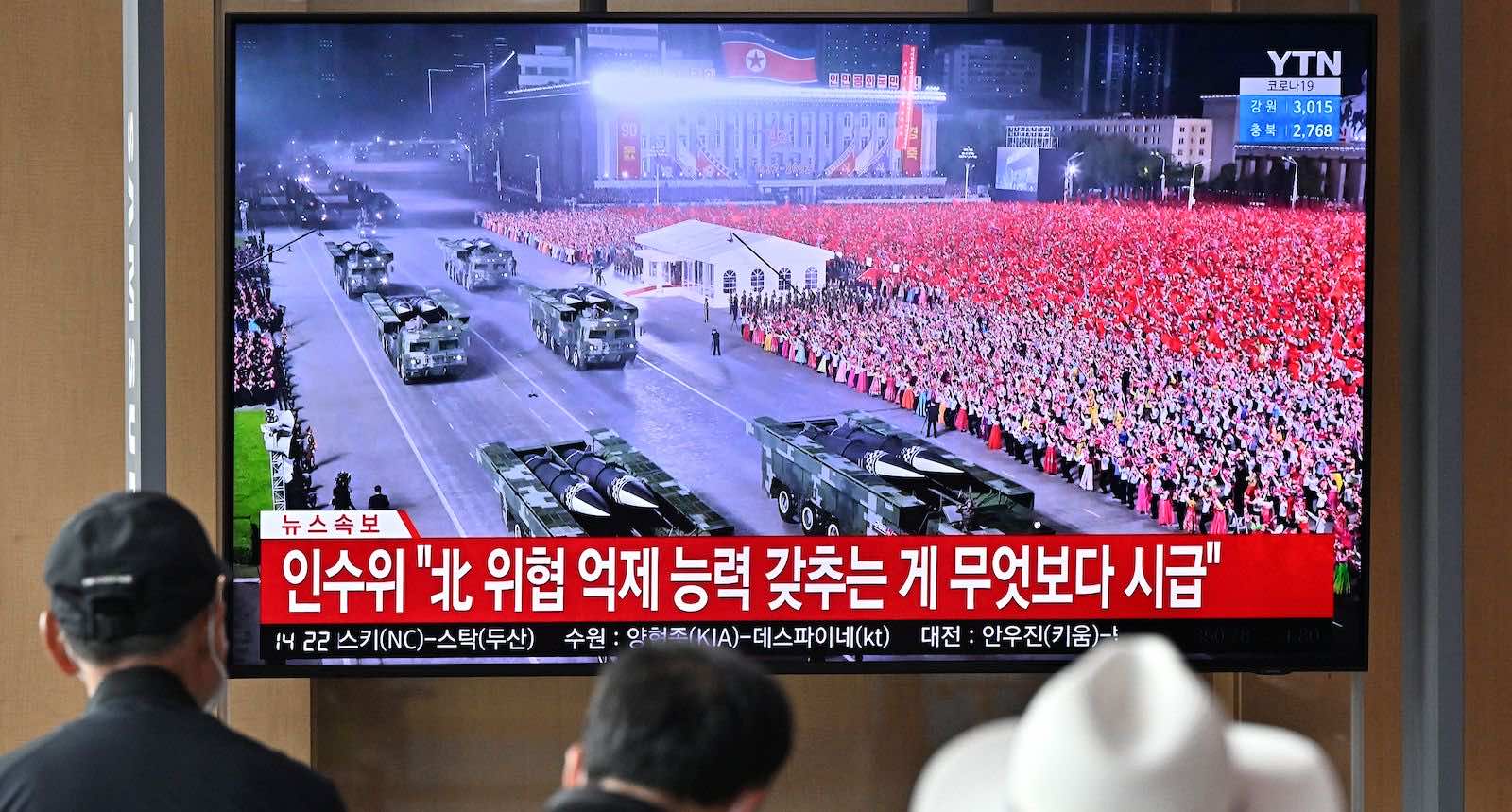 A news broadcast in Seoul of a military parade held in Pyongyang to commemorate the 90th founding anniversary of the Korean People’s Revolutionary Army (Jung Yeon-je/AFP via Getty Images)
Published 4 May 2022 05:00   0 Comments       Follow @KhangXVu

A military parade in the streets of Pyongyang last month gave North Korea another chance to show off its new Hwasong-17 intercontinental ballistic missile while marking the 90th anniversary of the foundation of the Korean People’s Revolution Army. Kim Jong-un, lauding the country’s nuclear arsenal, was reported to proclaim that the “fundamental mission” of atomic weapons was “to deter a war”, but notably said this can never be confined to a “single mission”. The implied threat, to use nuclear weapons pre-emptively, appeared to be his response to South Korean President-elect Yoon Suk-yeol’s support for a “pre-emptive strike” against the North. Yoon will take office on 10 May.

But the parade also conveyed another important message. Despite imposing strict national lockdowns since the beginning of the Covid-19 pandemic, North Korea has not shied away from holding such massive military displays – even when the country has struggled economically or its healthcare infrastructure was thought close to being overwhelmed.

Since January 2020, North Korea has held four major military parades (October 2020, January 2021, September 2021, and April 2022). It has also tested ballistic missiles on 16 occasions. These demonstrations of military might occurred while North Korea’s economy was estimated to be in freefall, having contracted 4.5 per cent in 2020 and its 2021 trade with China falling 90 per cent from before the pandemic. Starvation has returned in the major cities, with food scarcities and rising commodity prices.

A small ruling circle further helps insulate the regime from domestic and foreign pressure for change.

Kim had declared a “new strategic line,” in 2018, declaring success on the nuclear front and pledging to shift focus to economic advancement as he embarked on negotiations with South Korea’s Moon Jae-in and Donald Trump in the White House. What is clear in the past two years is that North Korea has done the exact opposite. Nuclear development clearly takes precedence over economic development.

The North has preserved with a wartime economy under the communist model of domestic mobilisation since its founding in 1948. Economic growth is not seen as a pathway to improve the people’s wellbeing as much as to safeguard the security of the country against foreign enemies. This explains why Pyongyang has been resilient in weathering economic sanctions, even when earning China’s wrath by developing a nuclear deterrent. When the 2019 summit in Hanoi between Kim and Trump failed to secure sanctions relief for the North, some experts expected North Korea to return to the negotiating table because it wanted to prevent the economy from contracting. North Korea instead doubled down on its nuclear program and shunned diplomacy altogether.

In February this year, Pyongyang conceded great economic hardship, but pointed to “hostile forces”, persistent sanctions and a worldwide health crisis, not to its own economic mismanagement, as the cause. The people should “tighten their belt” for national security.

A small ruling circle further helps insulate the regime from domestic and foreign pressure for change, which also explains Pyongyang’s stubborn emphasis on nuclear development even when the economic situation has become dire. North Korean elites do not bear the full negative impacts of their decisions – whether via international sanctions for nuclear proliferation or domestic economic hardship for lockdown measures. Covid-19 actually imposed a rare situation of putting North Korea under full international sanctions due to its border closure with China. Still, the regime perseveres while the general population suffers.

Amid reports of rising public discontent due to economic difficulties, the regime has increased its crackdowns on “anti-socialist” behaviour and emphasised its Juche (self-reliance) ideology. The border with China reopened in January 2022, but the volume of trade is still minimal and only made up of goods requested by the North Korean government, not ordinary businesses. It can always close the border at a short notice if the ongoing Covid-19 outbreak in China worsens.

The government has also expanded its prison camp systems to imprison violators of Covid-19 quarantine guidelines, which in practice includes anyone it deems to be politically suspicious. The number of inmates in several prison camps has consequently climbed by about 18,000. North Korea has also rejected vaccine donations from the international COVAX program partly due to fear of foreign monitors.

Yet the regime continues to hold maskless military parades despite evidence that participants were later infected with the virus. Military parades are a means to showcase the regime is heading in the right direction regardless of the ordinary people’s deteriorating living standard. They also reflect the government’s security priorities despite Kim’s touted focus on the economy to relieve the burden on the people.

For the North Korean elites, the party is never over in Pyongyang.