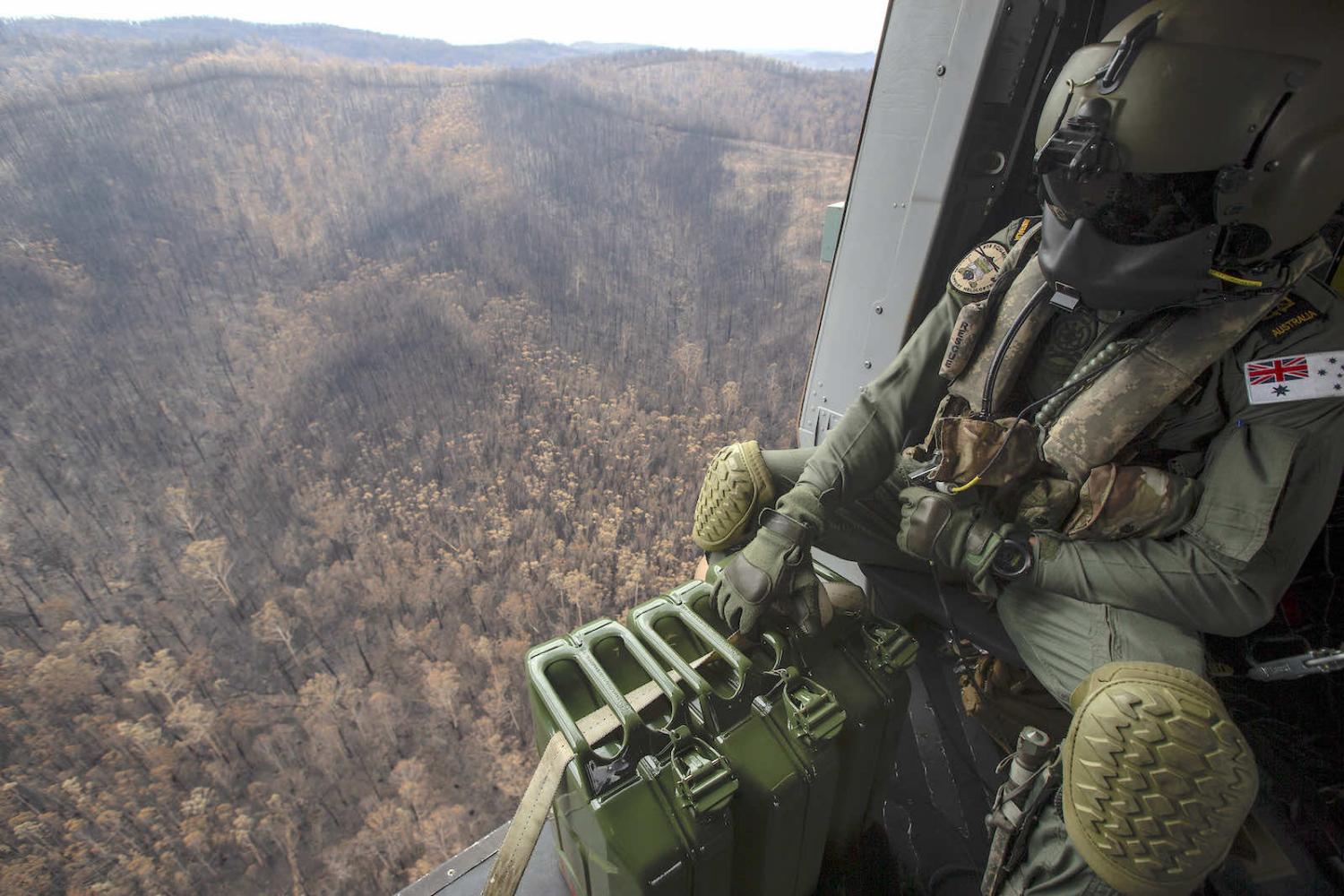 There is much talk of war drums beating, China battles and military deployments to North East Asia. Such visions are improbable and distant, and even if they occurred, Australia would be a small player among many much larger ones.

Instead, literally on each Australian’s doorstep, are the progressively worsening disasters that are driven by rising global temperatures. This is both Australia’s most pressing national security threat and a problem for Australians alone. In the end, Australians must help themselves.

The remarkably intense 2018–19 drought in Australia was then followed, not unsurprisingly, by nine months of horrific bushfires across 2019–20. The fires burnt an estimated 18 million hectares, destroyed almost 6000 buildings and killed at least 34 people. This was a bushfire season on a national scale that involved deploying 6500 Australian Defence Force personnel and Australia’s first ever national callout of military reservists.

The old mid-20th century way of doing things was shown to no longer be good enough.  Volunteer firefighting crews were simply overwhelmed by the magnitude of the event. Prime Minister Scott Morrison, speaking later, declared that “the scale of the bushfires this season ­– not least their simultaneous reach across many borders – has demonstrated to me the limits of these [old] arrangements.”

The trend line is disheartening. The drought that led to these fires arose in a world where global temperatures were only 1.1°C higher than average. The Glasgow summit means the world is on track to 2.4°C or more. The 2020 Bushfire Royal Commission has already laid out that compound disasters, where large-scale bushfires, floods and cyclones overlap across Australia, is the future.

The situation will get much worse. Global warming is being baked in through international inaction. However, tomorrow can be as Australians choose. Future disasters don’t need to have as bad an impact as the 2019–20 bushfires did. As the recent Security Leaders Climate Group “Missing in Action” study found, Australians can take action to save themselves, at least before the global temperature rises above 2°C and feedback loops potentially cut in.

An Australian national security strategy would have two strands ­– risk management and resilience – both working in combination. The risk management part seeks to limit the losses suffered to an acceptable level. There is no way to permanently stop bushfires, floods and cyclones so the intent is to keep losses at a manageable size. If successful, this means resilience becomes achievable rather than just a trendy buzzword.

In some Pacific Islands – such as Vanuatu and Fiji – Category Five cyclones are now starting to hit with insufficient time to fully recover before the next one.

Resilience involves bouncing back from a shock to be as good as, or hopefully, better than before. To do this, the shock can’t be overwhelming like the 2019–20 bushfires; it has to be survivable. Risk management can limit the shock to a level from which recovery is possible.

Time plays a central role. The 2019–20 bushfires were so large that recovery for some individuals and communities will not happen for decades. Australia needs to do much better, perhaps by aiming at recovery over, say, five years. If not, successive disasters will start to compound, keeping many Australians permanently displaced and dislocated. If that sounds apocalyptic, it is already reality in Pacific Islands such as Vanuatu and Fiji, where Category Five cyclones are now starting to hit with insufficient time to fully recover before the next one.

It is readily apparent that a national security strategy would deeply involve the national level of government. The Bushire Royal Commission calls for a whole-of-nation effort where the federal government plays a much greater role than in the previous century, in particular in coordinating preparation activities so as to achieve consistency across Australia. There needs to be a single national approach, not numerous well-meaning but fragmented local approaches as is happening now.

This will be a long, hot century. Australia needs to get itself prepared for a forthcoming series of much larger bushfires, floods and cyclones than have been the experience until now. No one state, region or business group can handle the future alone. It’s up to all Australians to pull together as a nation, not argue it’s someone else’s problem.

Previous Article
Economic diplomacy: Free trade vs economic resilience
Next Article
FOCAC: No mention of controversies while China sticks to a game plan

An unstable Afghanistan threatens all kinds of trouble for its neighbours. For Russia, it may be a golden opportunity.
Peter Nadin 30 Aug 2017 18:09

Whenever the Security Council membership is not unified, the Council cannot be effective. There are no exceptions.
Rachael Buckland 31 Aug 2017 15:50