Less an ideologue or demagogue, the former US Fed chair had an influence far beyond America, reaching Australia, too. 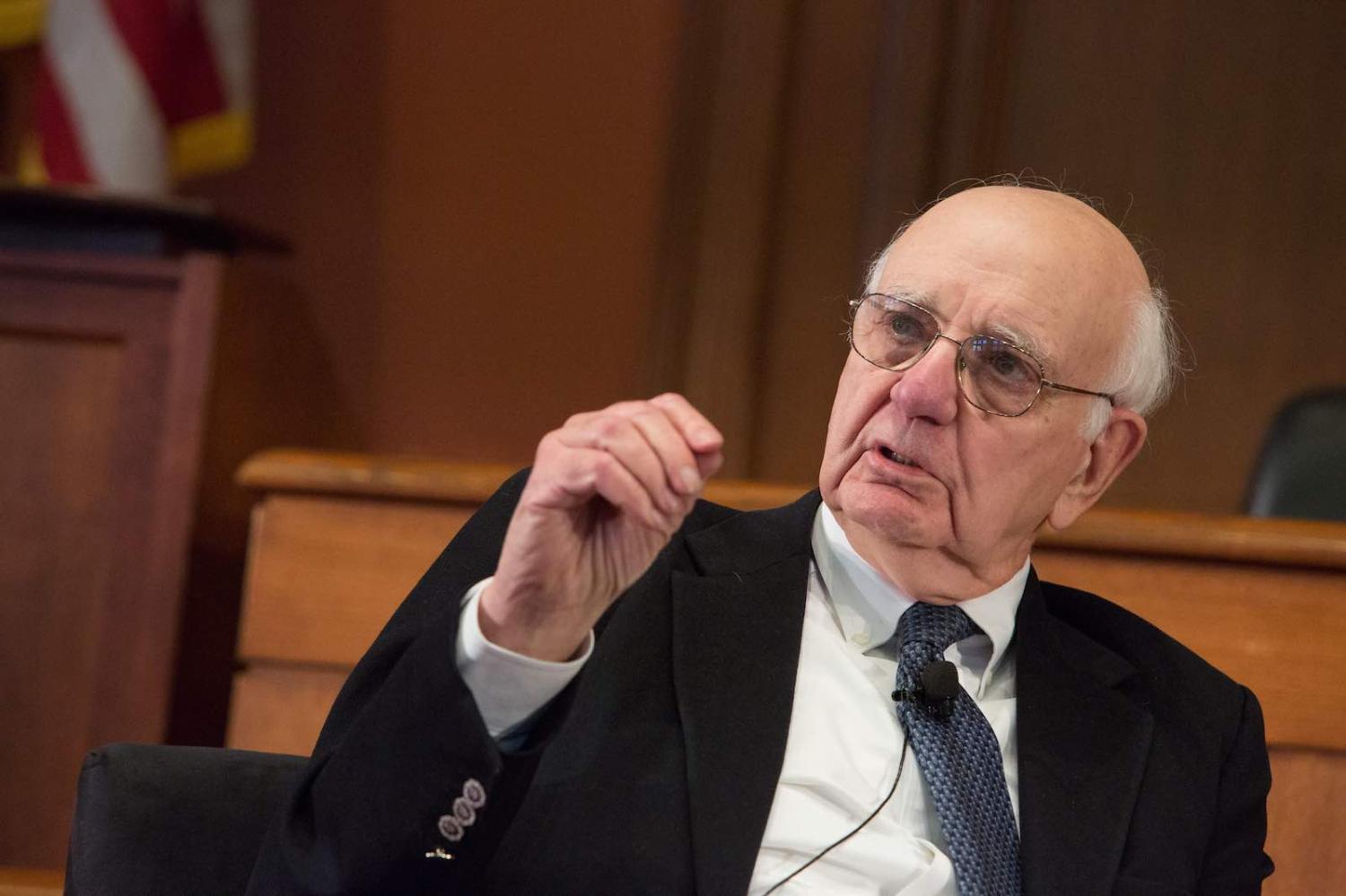 Paul Volcker, chairman of the Board of Governors of the US Federal Reserve from 1979 to 1987, presenting at Harvard University in 2012 (Photo: Edmond J. Safra Center for Ethics/Flickr)
Published 18 Dec 2019     Follow @WesWidmaier

Paul Volcker, chairman of the Board of Governors of the US Federal Reserve from 1979 to 1987, passed away this month. In remembrances, he has been most often celebrated for taming the runaway inflation of the 1970s. Yet, even as Volcker confronted the limits of post–Second World War Keynesianism, he resisted ideological commitments to “monetarism” or a “neoliberal” order.

Instead, over ensuing decades, Volcker would maintain a pragmatic suspicion of market power – in any setting. For example, just as he worked with Ronald Reagan to break the wage-price spirals of the 1970s, he would later work with Barack Obama to limit the speculative forces driving Global Financial Crisis–styled asset-price bubbles.

In this larger sense, even as the current climate is marked doctrinal and demagogic excesses, Volcker’s career highlights the benefits of a commitment to evidence-based pragmatism.

To be sure, Volcker’s victory over inflation brought him to global prominence – and set a template for policymakers around the world. With the Keynesian order crumbling in the 1970s under the weight of oil shocks and wage-price spirals, Volcker ascended to lead the US Federal Reserve, appointed by President Jimmy Carter in 1979.

On taking power, he would quickly raise interest rates to unheard-of levels – topping out at over 20% in 1980. The result was a debilitating recession, marked by double-digit unemployment. Yet, the memory of this recession also scarred US workers for decades, repressing inflation in an enduring way. Looking back, Volcker recalled in his memoirs that:

after years of compromise and flinching from a head-on attack on inflation, it was time to act – to send a convincing message to the markets and to the public.

Volcker’s restraint would echo across the world. Even in Australia, where the 1980s Prices and Incomes Accords provided an initial cushion against the worst excesses of austerity, there would be an eventual recourse to Volcker’s playbook. Looking back at the macroeconomic challenges of the 1980s, Prime Minister Paul Keating would lament to interviewer Kerry O’Brien that “inflation was always the central core virus.”

Eventually, Keating recognised the need for a slowdown that would wring inflationary expectations out of the system. Keating famously cast the early 1990s recession as “the recession Australia had to have”, elaborating that “had we not had it, wages would have been back to 1981 levels again and inflation would have been back in double digits”. Crediting Volcker’s influence, Keating elaborated that:

we were a decade late in doing for Australia what Paul Volcker did in America … A decade late in what I called snapping the inflation stick … I felt the strategy of using sharp interest rates needed to apply. A bit like Volcker, really.

Yet, to reduce Volcker’s legacy to the defeat of inflation is to overlook his broader pragmatism and later efforts at countering abuses of financial power. In late 1987, toward the end of his time at the Federal Reserve, Volcker resisted efforts at weakening financial regulation. As his biographer William Silber noted, when one colleague suggested that “the world has changed a lot” since the 1930s and that “we don’t have to worry a bit” about financial conflicts of interest, Volcker replied that “I guess I worry a little bit” and – unsuccessfully – resisted a mid-1980s regulatory easing.

What marked Volcker’s efforts was less an embrace of any single theory than a more general concern for abuses of economic power.

Taken as a whole, across these major crises of the past several decades, what marked Volcker’s efforts was less an embrace of any single theory than a more general concern for abuses of economic power. In sum, exemplifying values of public service that have come under challenge today, Volcker was less an ideologue or demagogue than a pragmatist.

Previous Article
Aid links: the cost of eating well for the world’s poor, more
Next Article
Chart of the week: Global trade through a US-China lens

Is World Bank chief economist Dr Paul Romer being sidelined? This is one of the topics covered in this week's links.
Lydia Khalil 3 Aug 2020 13:30