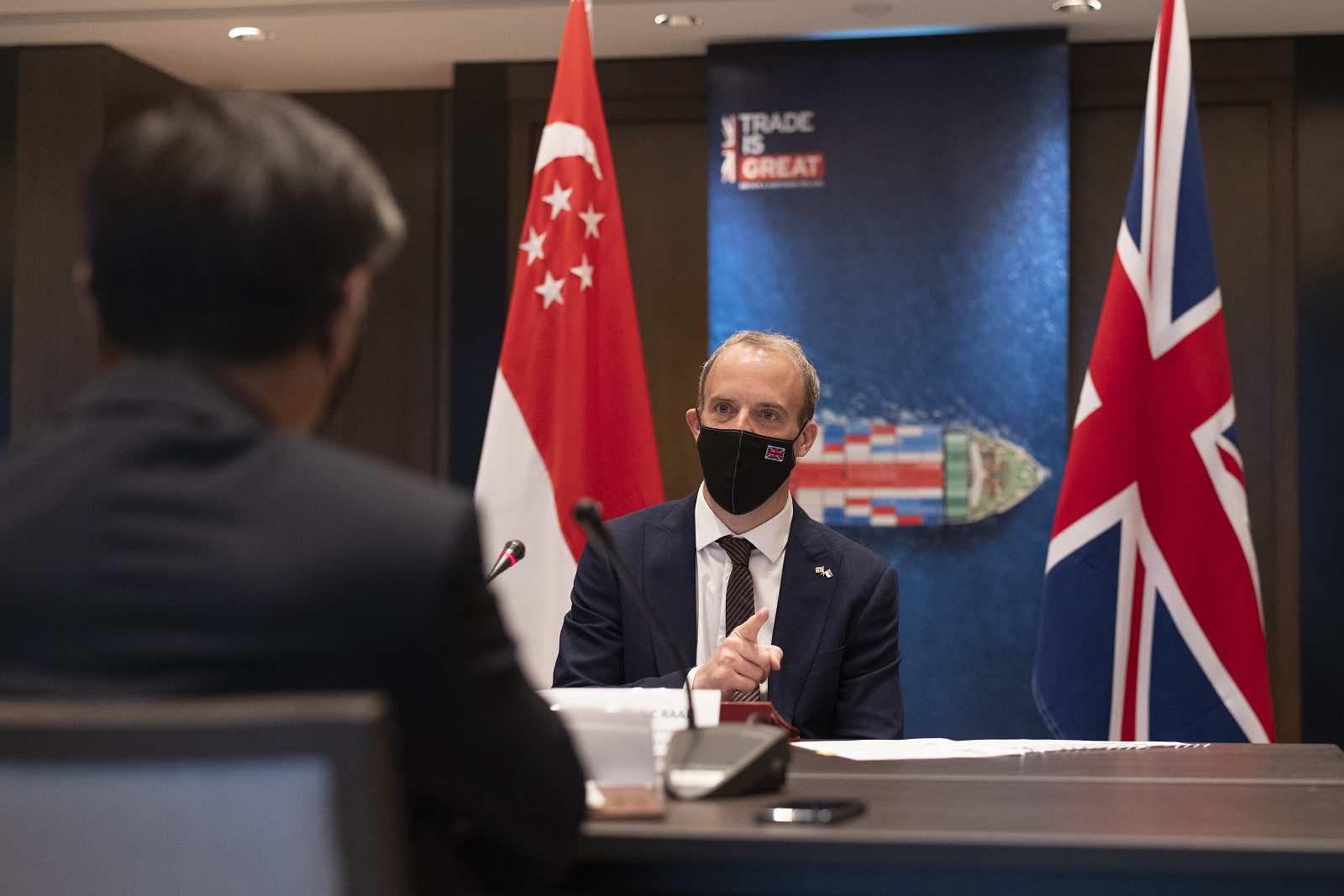 Britain’s Foreign Secretary Dominic Raab made a whirlwind trip last week to Vietnam, Cambodia and Singapore – three key nations that figure prominently in the UK’s post-Brexit trade calculations. Raab boasted the Cambodia visit was the first to the country by a British foreign secretary in three decades, but the major theme across each country was trade and deepening bilateral cooperation. Raab had also visited Kuala Lumpur last year to promote the Johnson government’s “Global Britain” strategy, but his latest trip to Southeast Asia coincided with a nationwide Covid-19 lockdown in Malaysia.

The United Kingdom has already expressed its willingness to play a bigger role in the Indo-Pacific.

Post-Brexit Britain is keen to revamp its old image of a regional security provider and register its presence independent of the European Union (EU) in Southeast Asia and the wider Indo-Pacific region. The United Kingdom signed trade pacts not just with Vietnam and Singapore, but also with Japan and Australia. To keep the trade momentum, the United Kingdom has also pledged to join the Comprehensive and Progressive Agreement for Trans-Pacific Partnership (CPTPP) – one of the largest trade blocs in the world. The influence of the EU is still evident. For instance, there is a remarkable similarity between the EU–Singapore and UK–Singapore trade pacts. Raab also signalled in Singapore an aim to put cooperation over the digital economy on the agenda.

That said, trade is not the only dimension of Britain’s renewed Southeast Asia and Indo-Pacific engagement. HMS Queen Elizabeth, the flagship of the Royal Navy, sailed for the disputed South China Sea waters while Raab was visiting the region. The ship visit was designed to showcase the UK’s military capability for friends and partners, demonstrate support for the United States, which has conducted freedom of navigation operations (FONOPS) near China’s artificial islands, endorse the principles of a rules-based order and work closely with its main proponents – Japan, India, Australia and the United States. The United Kingdom has already expressed its willingness to play a bigger role in the Indo-Pacific, highlighted in March with the release of its “Integrated Review of Security, Defence, Development and Foreign Policy: Global Britain in a Competitive Age”.

The increased UK engagement will be welcomed by the Association of Southeast Asian Nations (ASEAN) as well, with the regional organisation keen to engage with as many middle and major powers as possible. Talk that the United Kingdom will soon join as a dialogue partner for ASEAN is a further dimension to its regional engagement – ironic, in a fashion, given that Britain’s decision in the 1960s to withdraw from east of the Suez led to considerable anxieties among the Southeast Asian nations about communist threats in the region and influenced the establishment of ASEAN. Britain has other historical ties it will seek to draw on – with Singapore and Malaysia through the Five Power Defence Arrangements (FPDA), a defence pact that also includes Australia and New Zealand, and via the Commonwealth of Nations, with Brunei, Malaysia and Singapore as members.

But reviving old relationships will not be an easy task. London will have to do a lot of work to capture influence that is presently held by the EU and its leading powers – France and Germany.

In essence, Raab’s visit should be seen as London’s attempt to make up lost politico-strategic and economic ground in Southeast Asia and the wider Indo-Pacific region.

France, which had already launched its Indo-Pacific policy, is geographically a part of the Indo-Pacific region via its territories and historically an important stakeholder in Southeast Asia. French ship visits to the region are becoming more frequent and its partnership with Southeast Asian nations is growing stronger. This includes the newly established India–Australia–France minilateral cooperation framework and France’s three-pronged strategy to work with India in the Southern Indian Ocean. It’s a surreal twist that two of the countries on Raab’s itinerary once had a strong French influence.

Germany also has robust economic ties with all three of Asia’s big economies: China, Japan and India. The EU already has a trade pact with Japan, and trade negotiations with India are also likely to be resumed. Germany was the largest EU exporter of goods to ASEAN in 2020 and is also the top investor in the region. Here again, it cannot be a mere coincidence that two of the three countries that Raab visited were the largest (Singapore) and second largest (Vietnam) ASEAN destinations for EU exports of goods in 2020.

Motivation and sentiment are laudable – but concrete plans will matter more. In that regard, the CPTPP might not only help Britain fill the post-Brexit trade vacuum but also generate new opportunities. In essence, Raab’s visit should be seen as London’s attempt to make up lost politico-strategic and economic ground in Southeast Asia and the wider Indo-Pacific region. But in order to win back old friends and re-establish influence in the region, it has to go beyond catching up with the EU and go the extra mile.

Show Comments
Previous Article
Forgiveness not permission: A feminist foreign policy
Next Article
Aiding the Pacific during Covid: An update