Bitter experience should have been a warning that elections need to be properly planned and administered. 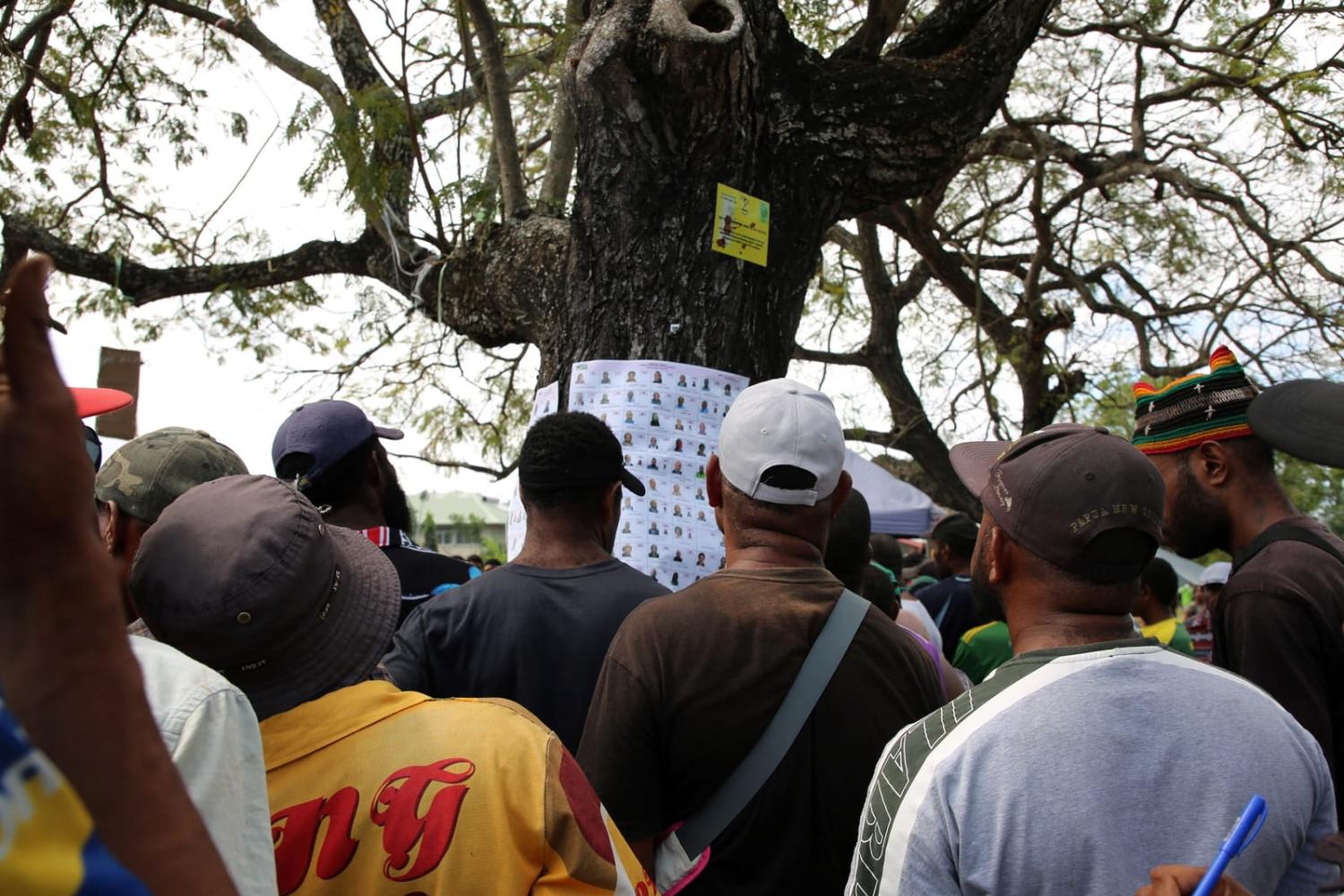 Violence is a mainstay of Papua New Guinea’s elections. As I write this article, tensions are high in the capital Port Moresby. Reports of machete wielding men slashing innocent by-standers along the city’s main roads and fears of retaliation fill my social media feed. Schools and business houses have closed, with many residents staying indoors.

PNG will continue counting through to August, as the return of writs initially scheduled for 29 July has been postponed to 12 August. By law, three-quarters of all seats are required to have concluded counting by the return of writs, with winners declared. So far, only 26 of the 118 seats have declared winners.

To secure this election, 10,280 security personnel were deployed. This is lower than the 10,500 security personnel deployed in 2017, despite the PNG Electoral Commission projecting 6.2 million voters (800,000 more than in 2017), as well as the creation of seven new electorates. Fewer security personnel stretched to cover more voters and seat elections has led to the polling schedule being spread out over two weeks, with different provinces scheduled for different days (one day for the problematic Highlands provinces), so that security could move between.

Of the 18 election hotspots for violence that were identified and planned to receive more security, Komo-Magarima in Hela province, Kompiam-Ambum, Porgera, Wapenamanda, and Kandep in Enga province, and National Capital District have experienced spates of violence. Although not identified as an election hotspot, ballot boxes were also destroyed in the Morobe districts of Markham and Kabwum.

The first election related death occurred in early May in Western Highlands, when an election officer was shot. This followed a delay in the publication of a list of election officers appointed, and led to false lists being circulated, shortened time available for queries by the general public, and violence between rival candidates over rumored appointments.

Throughout June and July, most of the violence occurred in the provinces of Enga, Hela, Southern Highlands, and Western Highlands. There were reports of the use of shotguns and military grade weapons, consistent with an estimate of illegal firearms in PNG numbering more than 50,000. The violence in Enga has resulted in more than 3,000 people being displaced, according to the United Nations.

In addition to destroyed ballot boxes, violence has included destruction of schools, houses, food gardens and livestock, as well as government buildings. A helicopter was shot at in Enga. Key bridges and roads have been damaged, with a three-meter wide trench dug through the road connecting Porgera to the Wabag town of Enga to obstruct election and security officers.

Candidates and their supporters, if they are unhappy with how the polling and counting is handled, often resort to violence and in many places security resources have been overwhelmed.

Violence seems to be most severe during polling, counting, and when results are declared. During the campaign period this year 28 deaths were reported, which is much lower than the 70 deaths during the 2017 campaign period (of a total of 204 deaths spanning the election). The toll for this year stands at under 50 deaths, although more are expected as winners are declared.

One reason for the relatively lower number of deaths before polling is that since the Limited Preferential Voting system was introduced in 2007, candidates have campaigned strategically by collaborating with other candidates to seek voters second and third preference votes. Preferential voting has not eliminated violence, however. Candidates and their supporters, if they are unhappy with how the polling and counting is handled, often resort to violence and in many places security resources have been overwhelmed.

Another problem is that the primary focus for security is the protection of ballot boxes. Security is heightened when ballot boxes arrive at polling booths for voting, and again when they are transported to centralised counting locations in each province (usually a nearby school or government building). Once counting concludes and a winner is declared, security is reduced, leaving disgruntled candidates and their supporters. Given an average of 31 candidates per seat in this election, tensions can be high after elections conclude and violence often ensues.

Much of the violence would have been avoided had the elections been properly planned for and administered. Although there are claims that the ruling party PANGU (Papua Nuigini Pati) rigged the election, there is little evidence to support this. Election fraud usually occurs at individual polling stations, and during counting, as these processes are overseen by provincial electoral commissions and local electoral officials, which the national electoral commission has limited influence over.

For dissatisfied candidates, the legal process to challenge results is to lodge a petition with the court of disputed returns. In 2017, 71 results were petitioned, and only three resulted in recounts ordered by the courts.

This election has repeated the experience of previous elections, with deaths, arson attacks, destruction of property and infrastructure, and people displaced from their homes. Beyond violence, there is little effective legal recourse for dissatisfied candidates, and has left many Papua New Guineans disillusioned with the democratic process.

For the incoming government, reforming the election process must be high in its list of priorities to ensure the 2027 elections do not suffer the same fate.

An agreement between Australia and Timor-Leste, humanitarian crisis experiences from around the world, public perception on aid and more.
Sian Troath 17 Jan 2019 12:00

Is the reality of Indonesia’s politics forcing a hardliner to become more moderate?
Kelsey Munro 11 Apr 2019 13:00