Terrorist threats set the Australian Federal Police a global challenge. But one to be balanced with priorities at home. 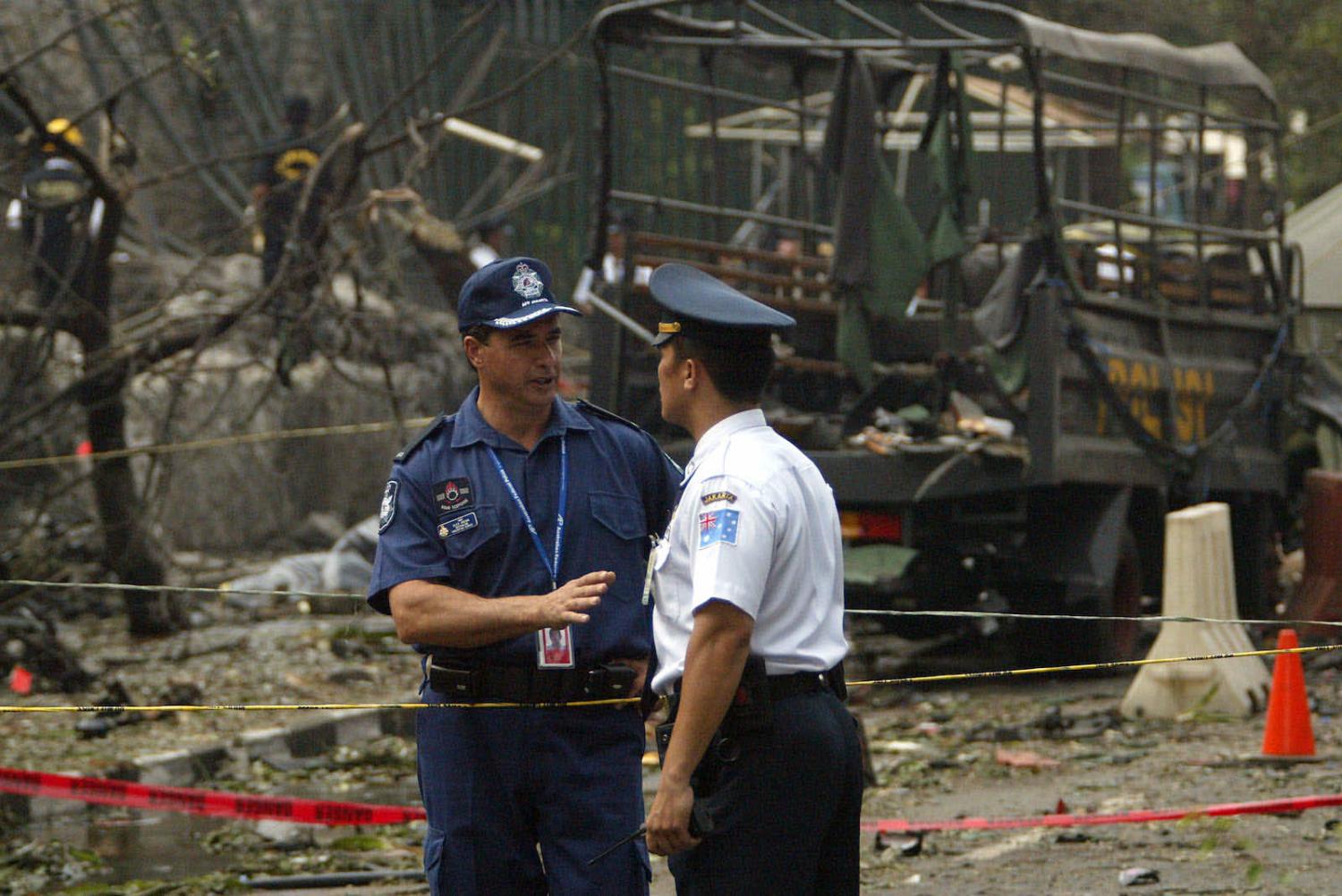 An Australian Federal Police officer, left, speaks with a security guard the day after the bombing of the Australian Embassy in Jakarta, Indonesia, on 9 September 2004 (Dimas Ardian/Getty Images)
Published 8 Sep 2021

9/11 and the subsequent terror attacks in Bali were the catalysts for rapid and considerable change in the Australian Federal Police (AFP). Most obviously the AFP was deployed to Indonesia in the aftermath of bombings in Bali and Jakarta. But the national security role for the police extended further, to capacity building in Solomon Islands, Timor Leste and Papua New Guinea, to assist in recovery efforts after the Indian Ocean tsunami, to investigate people smuggling syndicates, and following the downing of flight MH17 in the Ukraine.

In the decade after 9/11 the AFP’s budget increased fourfold, staff numbers more than doubled and numerous additional powers were conferred. So rapid were the changes that in the mid 2000s a senior Australian public servant reflecting on the growing significance of the AFP to national security observed “the good news for the AFP is it now finds itself at the centre of government, the bad news for the AFP is it is now at the centre of government”.

The remark captured a tension between the ideals of a police force and the functions of a national security agency – roles the modern AFP must continue to straddle.

As a police force the AFP is guided in its relationship with the community by the key message that “the police are the public and the public are the police”, indicating the police need to have legitimacy and consent to exercise their powers on the public. This draws on what are known as the Peelian Principles, attributed to the UK Home Secretary Sir Robert Peel, and used to establish the London Metropolitan Police in the 1820s. The principles are appealing to police and community alike – encapsulated in a sense by the idea of presenting evidence before a court to be judged, something national security agencies are not required to do. Of course, these principles were formulated to describe city policing in 19th century London.

Following the Sydney Hilton hotel bombings in 1978, the AFP was given a role in providing better responses to terrorist incidents. The meant the AFP needed to balance national security policing with traditional policing roles – to remain connected to the community it serves, preserving operational independence, while fulfilling national security tasks and avoiding undue political influence.

The AFP can never afford to focus on a particular crime type that may compromise its ability to perform its responsibilities.

Given the heady political focus on national security challenges, this can be a difficult task. Then AFP Commissioner Mick Keelty found himself in the governments bad graces in 2004 after comments about terrorist attacks targeting trains in Madrid when he inferred an obvious link between Islamist terrorism and the Spanish government’s position on Iraq. The detention of Indian national Mohamed Haneef under suspicion of links to bombings in the United Kingdom in 2007 using the powers gained under counter terrorism legislation following 9/11 also generated controversy about the AFP’s role and the perception by some of political pressure.

For political leaders, the AFP remains a less comfortable player in the national security arena than the relationship that has been adopted towards the Australian Defence Force (ADF). In contrast to the AFP, the ADF’s powers are mostly used for dealing with external threats and not “against” Australians. The military is also a compelling (and politically attractive) component of Australia’s identity based on ANZAC legend. Australian history features an anti-establishment streak that resiles against police, such as in the legend of 19th century bushranger Ned Kelly who after all was a convicted cop killer. Defence industry is beneficial for the economy and also provides great PR photos for politicians. Policing isn’t quite as photogenic. While politicians occasionally avail themselves of PR opportunities after a major drug bust, it’s not the same as sitting in the cockpit of a shiny new fighter jet.

Tensions in the resourcing of the AFP also exist. In a prescient article in 2007 a former senior AFP officer observed that the growing strategic tasks of the AFP were stretching the already “thin blue line” of the AFP. Despite the realisation that transnational crime was a threat to national security costing Australia nearly $50 billion a year, the growth in the AFP in the second decade following 9/11 has been modest and with no real increase in the number of sworn officers. As Keelty noted during his time in Canberra, “I am not considered a traditional ‘public servant’ by many in this city” so the task of achieving appropriate recognition and funding for the strategic importance of the AFP is challenging. While the establishment of the Department of Home Affairs does hold promise to break down bureaucratic silos, it also creates the potential to obscure the policing advice required for clarity in related national security issues.

The tension is also an internal one. As former AFP Commissioner Andrew Colvin said at a Lowy Institute speech in 2015 “I do not want the AFP to lurch so strongly towards national security that we forget some of our core, and traditional policing remits – transnational and organised crime for example.” The current Commissioner Reece Kershaw has strongly reinforced the AFP’s capacity to operate in both spheres, recently emphasising that “organised criminals also strike at the heart of our democracy by undermining our national security”. In essence he is suggesting that the AFP no longer has to make a conscious choice between spheres as all of its work is in the national interest.

So, what needs to be done? This question is particularly pertinent as the role blurring threats such as foreign interference and cybercrime increase. The AFP can never afford to focus on a particular crime type that may compromise its ability to perform its responsibilities in both domains equally – an independence that may at times put the organisation at odds with the vicissitudes of political expediency and opinion. Likewise, government will need to ensure that the AFP is adequately funded.

Moreover, while potentially uncomfortable for the AFP, there is nothing uncomfortable about community debate to challenge the powers and roles upon which the government chooses to confer on the AFP. Whatever the focus of policing, whether in the traditional or national security realms, the AFP is still the public and the public is the AFP.

Previous Article
China’s digital currency takes shape
Next Article
9/11: A President reacts on a day of fear and anger

Even under revitalised leadership, there are significant geopolitical and domestic constraints on Seoul’s room for manoeuvre with North Korea.
Greg Earl 1 Jun 2017 14:52

This week's column examines how the TPP 11 and RECP proposals could compete for attention ahead of Australia's summit of South East Asian leaders next year.
Leigh Howard 24 Aug 2022 05:00