The RAMSI legacy for Pacific policing

The benefits for Pacific Islands police in professionalism and training was a largely unplanned by-product of the 14-year mission to Solomon Islands. 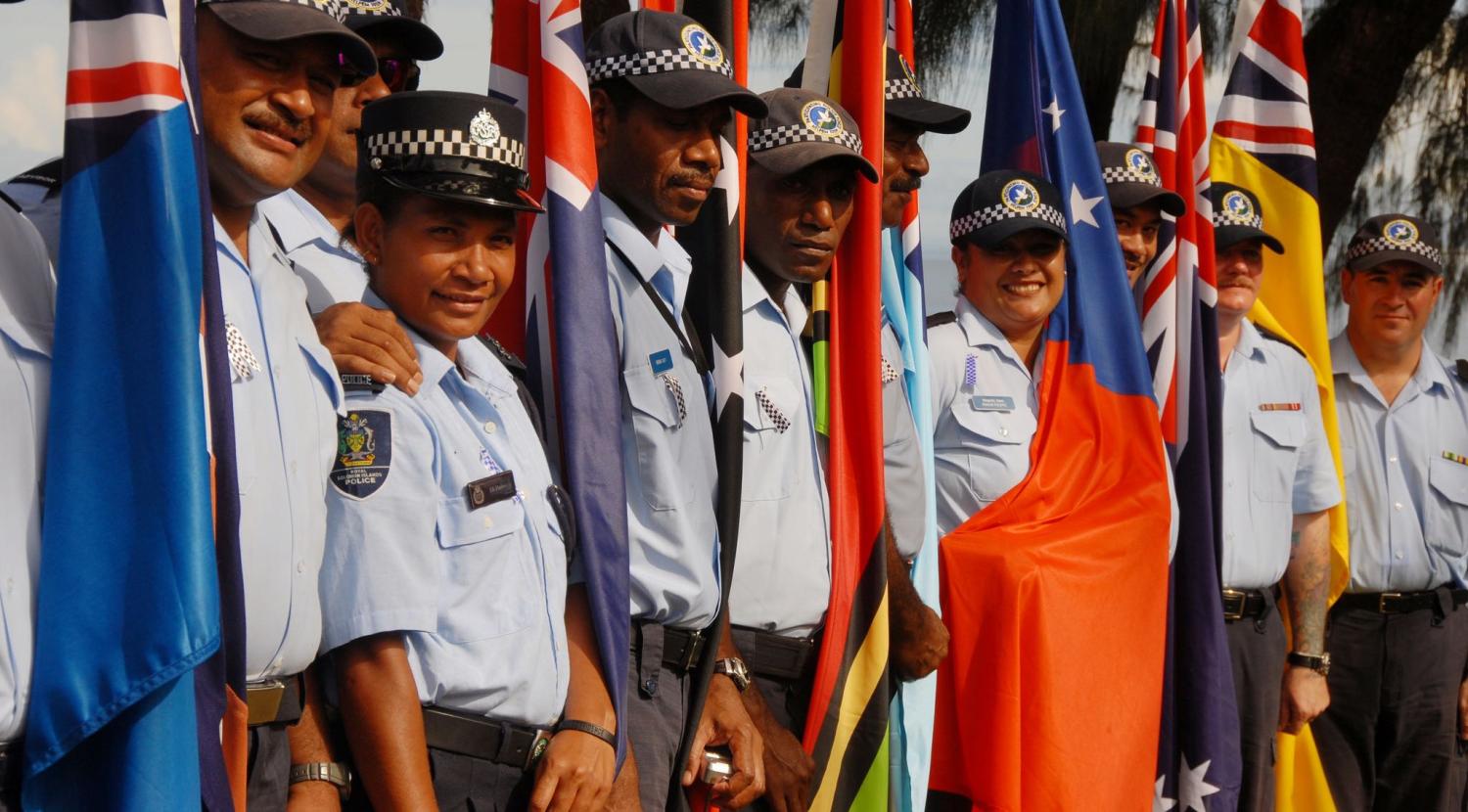 Despite the extensive coverage afforded most aspects of the Australian-led Regional Assistance Mission to Solomon Islands (RAMSI), relatively little attention has been paid to the large number of Pacific Islands police who served throughout the 14-year deployment.

RAMSI retained high levels of popular support until the mission finally ended in June 2017. For most Solomon Islanders, it was the mission’s Participating Police Force (PPF) that provided the public face of RAMSI.

Although the bulk of PPF personnel were from Australia or New Zealand, around one-fifth of its members at any one time comprised police officers from 13 different Pacific Islands forces: Cook Islands, Federated States of Micronesia, Fiji, Kiribati, Marshall Islands, Nauru, Niue, Palau, Papua New Guinea, Samoa, Tonga, and Vanuatu.

Recent research by the ANU’s Department of Pacific Affairs, supported by the Australian Federal Police, offers a detailed examination of the experiences of Pacific Islands police who served with the mission. The findings – based on interviews, focus-group meetings, and some survey work – highlight the significant contribution made by these officers to the mission’s work. It also shows the important and largely unintended capacity-building effects of their participation and interaction with other regional police forces.

Pacific Islands police contributed to all aspects of the mission’s policing activities. But many officers also emphasised their unofficial role as intermediaries between Australian and New Zealand police and members of the Royal Solomon Islands Police Force and broader Solomon Islands community.

Pacific Islands police demonstrated proficiency in translating across language, cultural, and policing differences. This was most obvious not only in the rural settings where RAMSI established a series of provincial police posts, but also in Honiara where the bulk of RAMSI’s resources and activities were concentrated.

In the course of their work, the police skilfully drew on their affinity with village life; appreciation of family and kinship ties, customary practices and beliefs; and their knowledge of the role churches play in Pacific Islands society.

It was in this delicate area of cultural understanding and competence where differences and potential frictions could arise between perceived “Western” and “Pacific” ways of policing. Pacific Islands police had a distinct advantage over their non-Pacific Islands PPF colleagues because some could use their “local” understanding and sensibilities to persuade their Australian or New Zealand managers to move beyond conventional Western policing norms where appropriate.

One example was the church outreach program that permitted uniformed officers to attend services and speak with local congregations about a range of issues, including “law and order”. An officer involved in this PPF-approved program claimed its extended outreach was approximately 67,000 people in a single year – or 10% of the national population.

Following the restoration of security during the initial phase of the mission, the PPF turned its attention to rebuilding the Royal Solomon Islands Police Force, which had effectively collapsed during ethnic tensions of the early 2000s. The subsequent focus on capacity-building with local police in Solomon Islands has largely overshadowed the extent to which the capacities of Pacific Islands police were also impacted by their service in RAMSI.

Few of these small forces had much previous experience in regional and international police missions. Although it was not a designated aim of the mission, the ANU research reveals that RAMSI service had a significant capacity-building impact on many Pacific Islands members of the PPF.

The impact of the mission on officers varied between individuals and according to the timing of their deployments, their policing experience, and the size and capabilities of their home organisations. An overwhelming majority expressed a positive view of their RAMSI experience. The highly structured pre-deployment training provided by the AFP in Canberra was greatly appreciated, not least for conveying new proficiencies, such as advanced driving, survival, and safety skills that were not provided by most home forces.

Other technical skills were acquired or honed during the actual deployment in Solomon Islands. The RAMSI experience also helped improve many officers’ English language and writing skills, as well computer and IT skills. A number of senior police managers, particularly in the smaller Pacific Islands forces, remarked on the increased professionalism of their staff members on their return from Solomon Islands.

Other less anticipated benefits included greater awareness and appreciation of occupational health and safety procedures and standards. This included education regarding diet, exercise, and the prevention and detection of diabetes. One officer who had been a chronic sufferer of malaria in his home country reported how he and his family had no further recurrences following his adoption of preventive measures acquired during the mission.

The impact of RAMSI service also had distinctly gendered dimensions. Most female Pacific Islands officers interviewed highlighted how confidence in their skills and abilities had increased as a result of their deployment. This included learning from the example of women involved in leadership, training, and other policing activities typically done by men in their home countries, as well as from informal mentoring and friendships with women officers from different forces.

The impact was much greater on women officers, as well as some of their male colleagues, from those Pacific Islands forces and countries facing the most serious gender equity and empowerment challenges. Many officers stayed in touch with former RAMSI colleagues, usually through Facebook, after their deployments ended. Much of this continuing contact was primarily social, although examples were provided of the benefits of maintaining networks and contacts for professional advice and assistance.

The ANU research illustrates how the capacity-building benefits of RAMSI service among Pacific Islands police have been cumulative and diffuse. The experience of working together and forging personal relationships also has potential for regional programs.

At the same time, being a largely unplanned by-product of the RAMSI experience, little attention was paid to ways of sustaining the benefits following Pacific Islands officers’ return to their home forces. In retrospect, these could have been pursued more strategically through post-deployment initiatives and deliberate networking.

Serious work should now be done on how to maximise and sustain the potential benefits arising from multinational policing engagements.

Leaders agreed on an “expanded concept of security” to cope with threats the Pacific faces today and will face tomorrow.
William Stoltz 3 Sep 2020 07:00