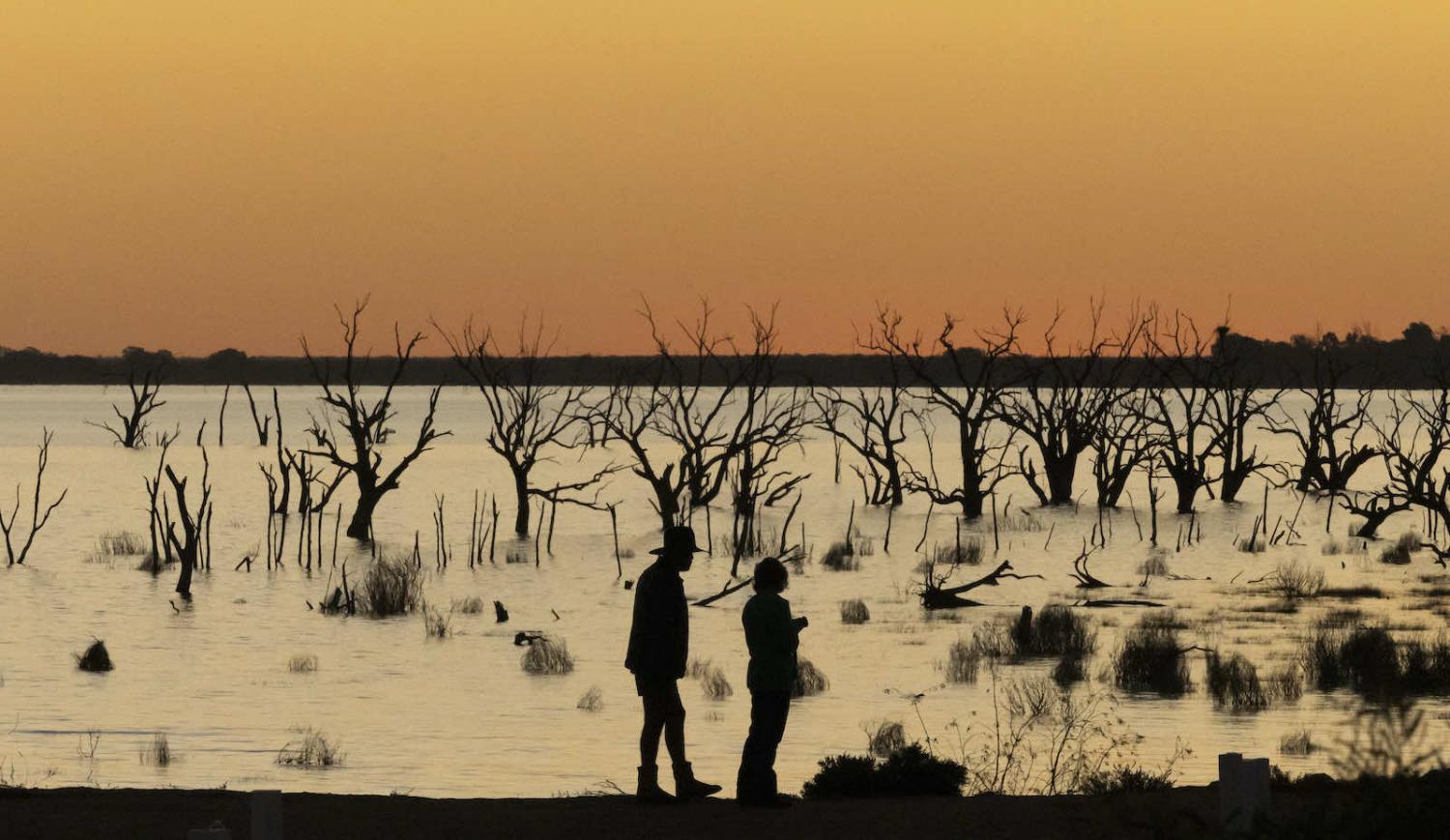 Watching the sunset over Lake Menindee in far-west New South Wales, which filled for the first time earlier this year after five years of drought, 17 May 2021 (Brook Mitchell/Getty Images)
Published 26 May 2021     Follow @hannahleser

With US President Joe Biden putting climate change at the centre of US foreign policy, Australia is facing increasing pressure from its closest ally to do more. John Kerry, the Special Presidential Envoy for Climate, has said the Australian government is not on the “same page” as the rest of the world on environmental issues. New Lowy Institute polling released on Wednesday shows that the majority of Australians are eager to match its international counterparts in tackling the climate crisis and want to see more ambitious climate policies.

Seven in ten Australians say Australia should join other countries, such as the US and the UK, in increasing commitments to address climate change ahead of the UN Climate Change conference (COP26) later this year in Glasgow. COP26 is urging countries to set ambitious 2030 emissions reduction targets, along with reaching net-zero emissions by 2050.

Prime Minister Scott Morrison has said that Australia’s “goal is to get there as soon as we possibly can” in terms of net zero. Most Australians would be in favour of this by 2050, with 78% saying they support “setting a net-zero emissions target for 2050”. The US, UK, the European Union, South Korea and Japan are just some of Australia’s partners that have already declared a target for net-zero emissions between 2030 and 2050.

The pressure from overseas is matched by domestic pressure to do more in addressing the challenge of climate change. While the Covid-19 pandemic seemed to overwhelm national concerns around climate change in 2020, these concerns are now ascending. Six in ten Australians say Australia “should begin taking steps now, even if this involves significant costs”. This figure has nearly doubled in less than a decade. In 2012, only 36% of Australians regarded climate change as “a serious and pressing problem” requiring action now, even if this involved significant costs.

Morrison has said that “my government will not tax our way to net-zero emissions”, presumably in reference to the policy to put a price on carbon emissions introduced in 2012 by the Labor government of Julia Gillard and then abolished two years later by the Liberal-National Coalition under Tony Abbott. This move made Australia the first in the world to roll back emission reduction legislation. Public opinion on this issue has changed – in 2021, six in ten Australians would support “introducing an emissions-trading scheme or carbon tax”. This was not a view held by the majority in 2016.

And while Australia has long promoted the economic benefits and job reliability provided by the coal industry, support for Australia’s second-largest export is waning, with only three in ten Australians saying they support federal government subsidies for building new coal-fired power plants. Indeed, a majority of Australians (60%) support banning the opening of new coal mines in Australia, while 63% say they would like to see a reduction in Australian coal exports. This is timely, as many of the international markets to which Australia exports have set net-zero targets and are unlikely to continue importing unsustainable resources.

This year, 11 new coal mines were added to the federal government’s “major projects” proposal list in New South Wales alone. The government has offered limited funding for the renewable energy and technology sector in its latest budget presented this month, instead holding firm to its “gas-led recovery”, including a $600 million package to fund a new gas-fired power plant in the Hunter Valley in New South Wales. Although experts warn that further investment in gas would ensure Australia failed to meet a 2050 net-zero emissions target, a majority of Australians (58%) support “increasing the use of gas for Australia’s energy supply”; however, this has lower levels of support than investment in renewables.

A national consensus on climate policy has stalled for more than a decade based on the question of cost. Arguments for Australia to become a “renewable superpower”, such as that from Ross Garnaut, have not yet gained traction at the political level. But regardless of generational differences, most Australians (74%) say “the benefits of taking further action on climate change will outweigh the costs”. This result is significant, given that more often than not the question of cost has been the sticking point.

After ASEAN summit, little change on the South China Sea

Despite expectations leaders might collectively rebuke China for its latest actions, the message was more uncertain.
Ian Storey 4 Apr 2022 13:00

Limitations in the established rules and forums have led the region to innovate.
Shaun Cameron 14 Jan 2022 06:00