Comparisons may help draw attention to the crisis, but they ignore essential differences. 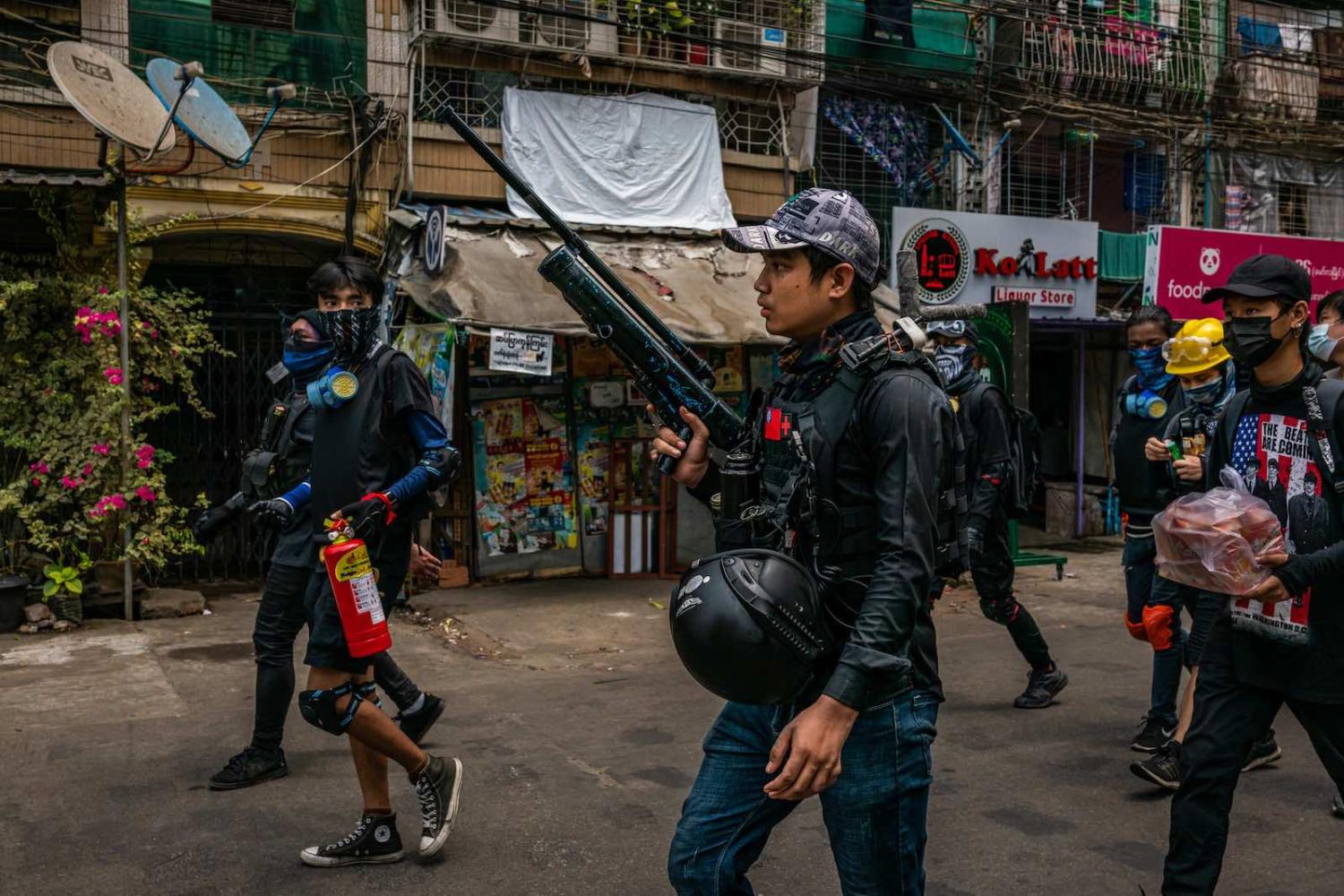 The deteriorating situation in Myanmar has led some observers to issue warnings of a “new Syria”. The two scenarios are not without broad similarities. In mid-April, civilians in Myanmar were being killed at a higher rate than in 2011 Syria, when a crackdown on protests sparked a brutal civil war.

Like their fellow Syrian protestors, civilians in Myanmar are forming their own militias. Myanmar already had a patchwork of ethnic militias, some of which have stepped up attacks on the military, known as the Tatmadaw, ostensibly in support of the protestors. Geopolitically, the fault lines mirror the Syrian conflict, with Russia and China blocking Western-led efforts to censure the Tatmadaw at the United Nations.

Nonetheless, there are substantial differences between 2021 Myanmar and 2011–12 Syria.

Three key elements helped create the Syrian conflagration: a mass armed uprising, extensive foreign intervention on both sides and an influx of foreign fighters. None of those elements currently exist in Myanmar, and it is unclear whether they ever will – particularly the second and third.

Myanmar’s pre-existing array of ethnic armed groups (EAGs), with an estimated 75–78,000 armed members, would play a key role in any mass armed uprising. Recent attacks on Tatmadaw targets involving the Kachin Independence Army (KIA) and the Karen National Union (KNU) are indicative of some level of coordination between the urban opposition and EAGs. These incidents – along with the declaration of allegiance by at least ten EAGs to the National Unity Government (NUG) formerly led by NLD, and talk of a “federal army” to replace the Tatmadaw – have helped drive analogies with Syria.

An inordinate number of foreigners flocked to fight in Syria, often driven by transnational religious and sectarian motivations that simply do not exist in Myanmar’s case.

What these comparisons overlook, however, is the complexity of Myanmar’s ethnic politics. The NLD was seen by many ethnic minorities as beholden to its ethnic Bamar majority supporters. Progress on the peace process was slow, and the NLD actually blocked proposals for increased regional autonomy. Rather than restoring a majoritarian NLD, the primary objectives of EAGs are autonomy and the protection of their own special interests. Nor are Tatmadaw-EAG relationships uniformly hostile. Cooperation in the lucrative drug, timber and gem trades has benefitted both the Tatmadaw and certain EAGs.

Many EAGs are hedging their bets. Myanmar’s largest EAG, the United Wa State Army (UWSA), has remained conspicuously silent on the coup. This matters in that the UWSA, backed by China, has traditionally distributed arms to other EAGs. Other groups, such as the Three Brotherhood Alliance – made up of the Ta’ang National Liberation Army (TNLA), Rakhine Arakan Army (AA) and Kokang Myanmar National Democratic Alliance Army (MNDAA) – appear to be using the prospect of supporting the protestors to leverage concessions from the Tatmadaw.

The EAGs are not a united monolith. Fighting has actually increased between Shan and Ta’ang groups since the coup. Several smaller groups have even thrown in their lot with the Tatmadaw. While any military coordination among the NUG, protestors and EAGs has the clear potential to increase violence, an anti-Tatmadaw military machine combining ragtag NUG militias with more experienced EAGs is a long way from emerging.

In contrast to this scenario, the arms, finance and, in some cases, direct military support that Turkey, the Gulf states, the US, France, Russia and Iran provided to both sides of the conflict in Syria was central to its broader escalation. It is difficult to see who might play such a role in Myanmar.

While the Tatmadaw might disagree after the Jakarta summit, the Association of Southesat Asian Nations is reasonably good at practicing what it preaches on non-interference. During the Cold War and before Myanmar was an ASEAN member, Thailand strongly supported various EAGs. Nowadays, though, it is inconceivable that any country in ASEAN would do so. Militarily supporting the NUG or EAGs would undermine ASEAN’s overriding goal of regional stability and would set an uncomfortable precedent for other ASEAN members with no shortage of internal issues or democratic deficits.

Nor is the US likely to step in after the relative failures of Afghanistan, Iraq, Libya and Syria itself. Geopolitical competition with China – rather than democracy promotion – is the main game today. Actively arming and financing the NUG and allied EAGs would burn bridges with ASEAN at a time when, by some counts, the US is losing its edge in Southeast Asia. Nor does democracy promotion in Myanmar (beyond diplomatic statements and sanctions) gel with “foreign policy for the middle class”, US President Joe Biden’s attempt to refocus US efforts abroad.

What of China? China has furtively provided some extra weapons to Tatmadaw. This does not mean however, that China would play the role that Russia or Iran did in Syria. For one, China has a chequered relationship with the Tatmadaw and would likely prefer the coup never happened. Beijing has always been wary about Tatmadaw-EAG conflict spillover into China and has a series of highly strategic local investments to protect. China’s legacy of interference supporting EAGs ironically allows it to play a stabilising role by restraining groups like the UWSA.

Finally, there is the issue of foreign fighters. An inordinate number of foreigners flocked to fight in Syria, often driven by transnational religious and sectarian motivations that simply do not exist in Myanmar’s case. Cross-border kinship connections linking communities in north-eastern India and south-western China with EAGs in Myanmar are small beer in comparison.

None of this is to downplay the human catastrophe unfolding in Myanmar and the potential for some escalation. Analogies with Syria grab headlines. They do not however, form a sound policy basis for responding to a situation that is intractable and tragic in its own right.

A step-up by Paris in the Indo-Pacific is evidence that it aims for a pragmatic third path in the region.
Khang Vu 4 May 2022 05:00

Britain has pinned hopes on former colonies before, with overstated consequences then, leaving lingering doubts now.