“Sustainable security” should be a mantra for a reformed military in a pandemic age. 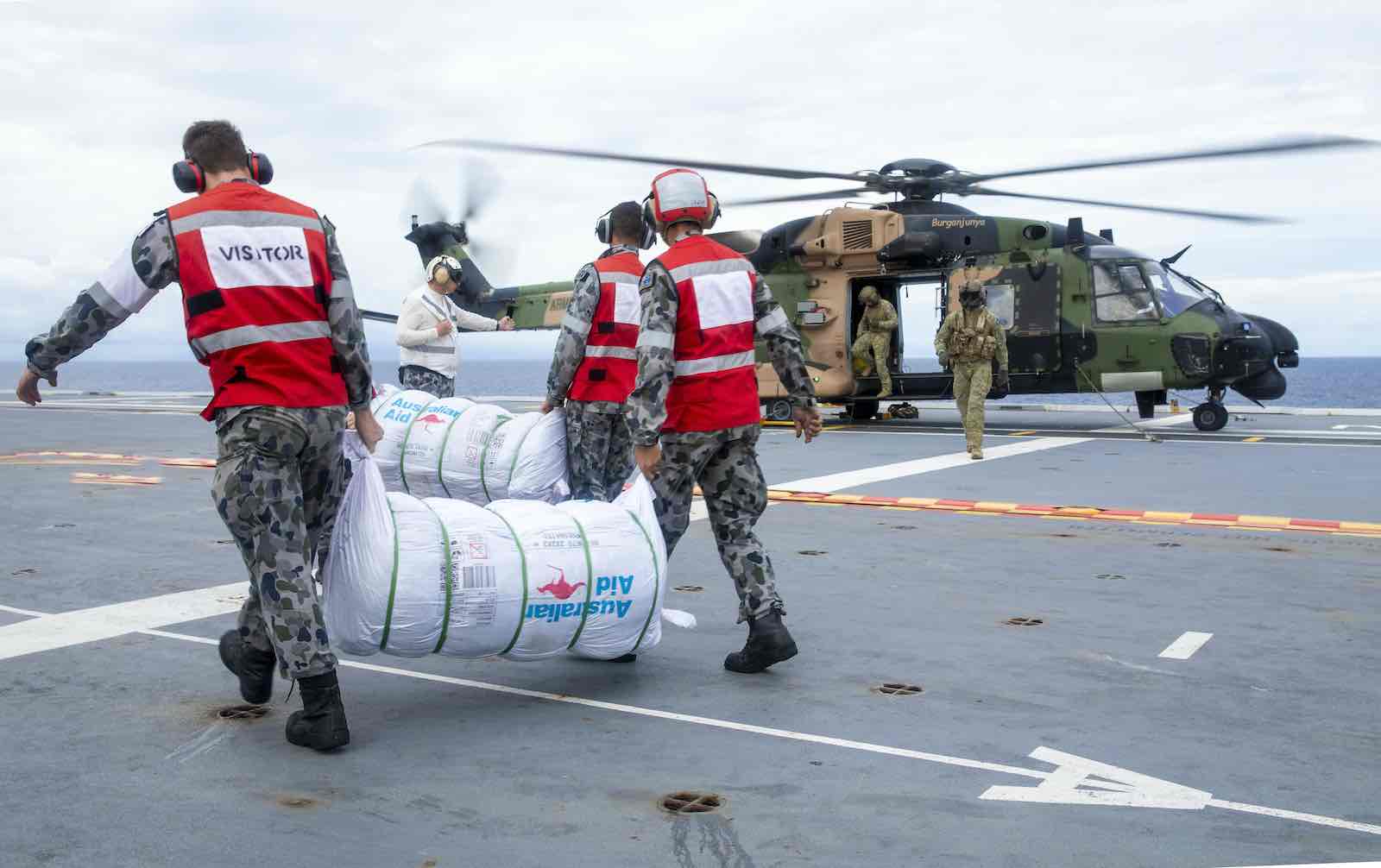 Relief supplies bound for Nabouwalu on the island of Vanua Levu, Fiji in January 2021 (Department of Defence)
Published 27 Jan 2021 06:00   0 Comments

Past global economic downturns have usually had a knock-on effect for military budgets, resulting in lower defence spending. After the global financial crisis led to the contraction of the world GDP in 2009, global military spending only recovered in 2015. With the World Bank predicting that the Covid-19 pandemic will see the global economy shrink by 5.2% this year – the deepest global recession since the Second World War – more pressure is likely to mount on defence budgets.

Cuts are already evident. Not only has Covid-19 led to the postponement and/or cancellation of various defence programs, economic support is most likely to be first directed to the non-military sectors heavily affected by the pandemic such as tourism, retail, healthcare as well as civil defence. As governments continue to grapple with longer-term fiscal impacts of Covid-19, militaries are likely to look for other methods to continue enhancing a defence capacity.

The obvious answer is for the military to find a complementary role in response to the health crisis. Although the United Nations advocates that militaries should only be used during humanitarian situations as a “last resort”, this guideline is rarely adhered to in practice. As both developing and developed countries have struggled with stretched resources during the pandemic, and with less international assistance available, the military’s ability to quickly scale up its ability to provide logistics and muscle has been seen as particularly useful.

In Southeast Asia, the military tends to be heavily involved in humanitarian relief efforts as a usual practice, but the Covid-19 emergency has also seen militaries mobilised where they have not traditionally been involved in civilian disaster relief, such as in Europe.

However, military actors are guided by their allegiance to the state, not by the humanitarian sector’s operating principles of neutrality, impartiality, independence and humanity. Without trust as neutral humanitarian actors, military forces may have costs that outweigh the benefits, particularly in complex emergencies involving conflict or post-conflict scenarios.

If the military is to play an ongoing role in domestic humanitarian efforts, Covid-19 may prove to be a golden opportunity to put into place planned reforms by restructuring and updating infrastructure, equipment and priorities to best adapt to the needs of the task.

Militaries should look at increasing the acquisition of dual-use military equipment – goods and technologies that can used for both humanitarian and military purposes. The obvious example includes enhancing capacities in chemical, biological and radiological defence, which would increase ability for defence forces to support the healthcare sector in countering Covid-19 as well as other future infectious disease outbreaks.

As the emergence of Covid-19 and previous infectious disease outbreaks such as SARS have highlighted, the transboundary nature of these public health disasters requires a multinational response.

No military is separate from its society. As the global death toll from Covid-19 surpasses two million, the military’s ability to consistently train and deploy personnel and equipment is likely to also be affected. Defence relationships with other friendly nations will be crucial, so there is a clear need to augment or expand existing ties and multilateral arrangements to foster interoperability.

Among the members of the Association of Southeast Asian Nations, this could take the form of “sustainable security”. Part of Thailand’s theme during its ASEAN chairmanship in 2019, sustainable security enhances the capacities of member states to address regional non-traditional security threats, including humanitarian disaster relief, as well as enhancing defence cooperation among member states and partners – as stated in the Joint Declaration of the ASEAN Defence Ministers on Sustainable Security.

The annual ASEAN Defence Ministers’ Meetings (ADMM) provide a multilateral defence cooperation platform for ASEAN and the various ADMM initiatives including the ASEAN Centre of Military Medicine and ASEAN Militaries Ready Group on humanitarian assistance and disaster relief. Nevertheless, Covid-19 and the importance of a regional response may be just the push the ASEAN states need to further consolidate the importance of defence cooperation in disaster response into more practical measures.

As the emergence of Covid-19 and previous infectious disease outbreaks such as SARS have highlighted, the transboundary nature of these public health disasters requires a multinational response. With militaries being the region’s primary responders to disasters, demonstrating regional defence cooperation on pandemic control would also further assist ASEAN in maintaining its centrality in future disaster situations.

With the potential constraints on funding leaving governments more inclined to focus on the domestic context, disruptions to defence policy seem unavoidable. For militaries to adapt to the challenges of Covid-19, they must shift their focus to better suit the changing circumstances. Taking to heart the concept of sustainable security by building defence relationships and re-prioritising their role as humanitarian assistance and disaster relief actors will allow them to organise their spending in such a way as to best respond to the challenges of the present.