The latest figures suggest strife in Hong Kong has also given a boost to the region’s economic fortunes. 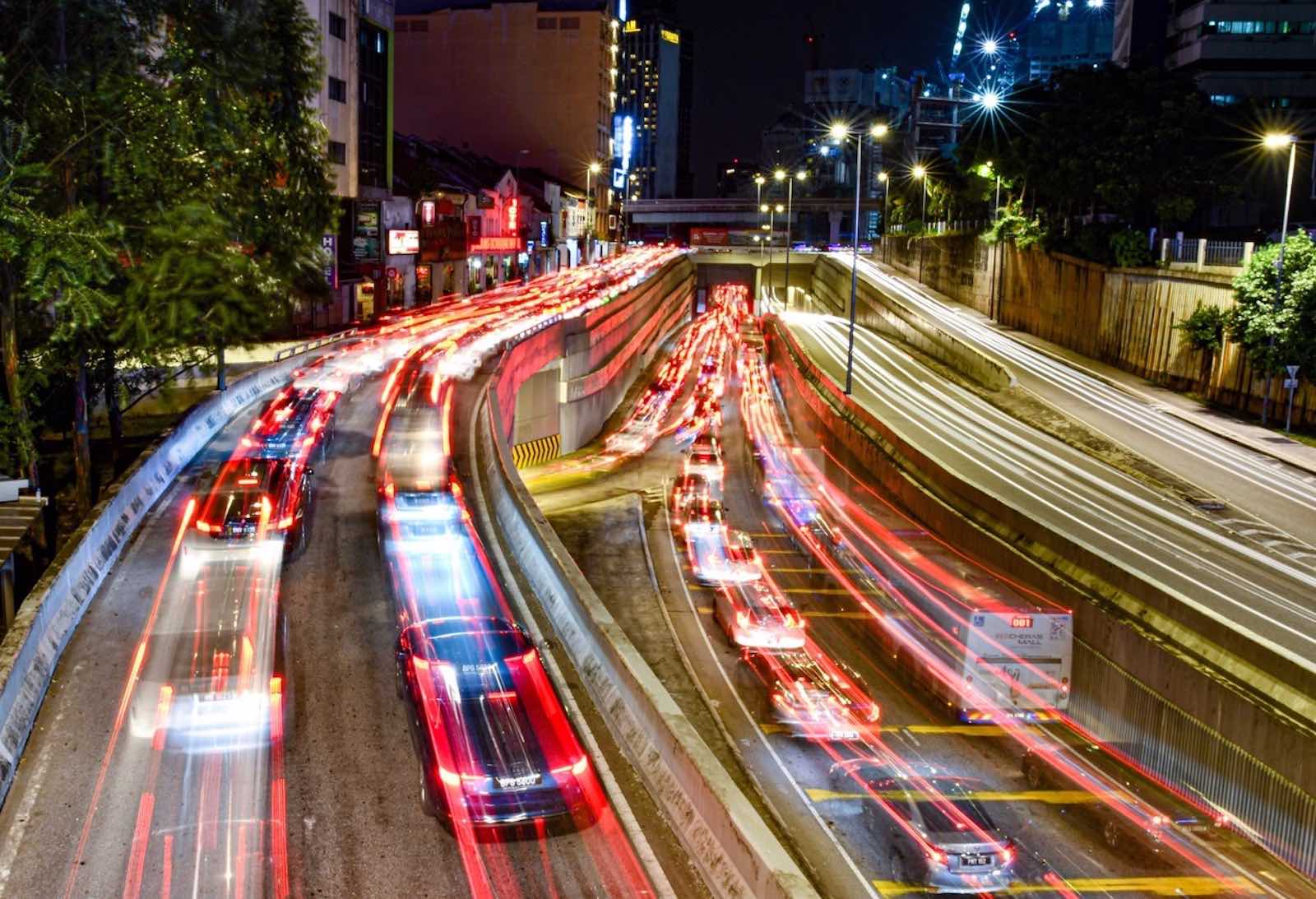 After more than a year of tit-for-tat tariffs in the US-China trade war and generalised anxiety about the cost to the world economy, it is remarkable that foreign direct investment into Southeast Asia continued to grow strongly last year, even as global levels flatlined.

Newly-published estimates from the United Nations Conference on Trade and Development (UNCTAD) suggest that, out of a global FDI spend of US $1.39 trillion in 2019, member-states of the Association of Southeast Asian Nations received $177 billion, breaking the region’s 2018 record of $155 billion.

While Southeast Asia’s 2019 total was substantially less than European Union's $305 billion or the United States’ $251 billion, its inward FDI is increasing while the EU’s dropped 15% and the US’s stayed the much the same.

To put Southeast Asia’s FDI in greater perspective, the total for Japan was a mere $11 billion. Despite its imminent departure from the EU, the United Kingdom took in $61billion worth of FDI, which though a slight drop on 2018 was significantly more than either France and Germany and slightly more than all of South Asia.

Of the other developing economy regions, Latin American and the Caribbean received slightly less FDI than Southeast Asia, with both regions far ahead of Africa’s estimated $49 billion. And while China’s total of $140 billion was slightly above its 2018 total, East Asia as a whole saw a significant decline of 21%, much if it down to an estimated halving of Hong Kong’s inward FDI to $55 billion. 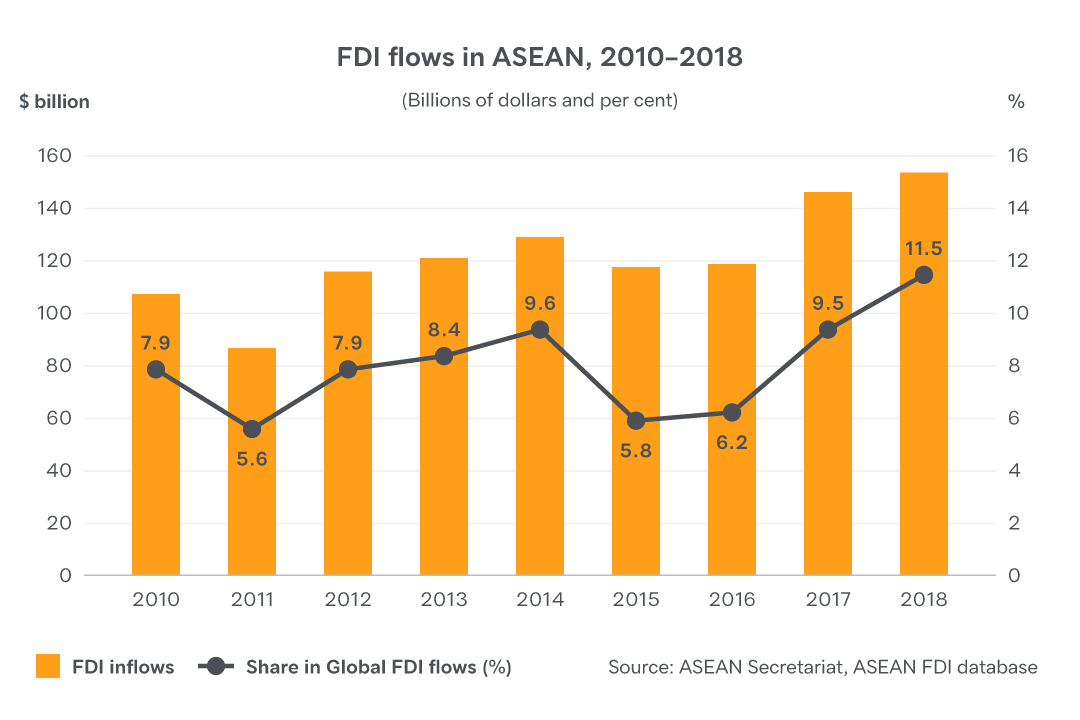 Hong Kong entered a recession in the second quarter last year, but the implication is that pro-democracy protests and fears that China might resort to a heavy-handed clampdown have prompted investors to look to Singapore, which took in the biggest share by far of the Southeast Asian total: $110 billion, a 42% surge on 2018.

This augurs well for Southeast Asia’s economic prospects in 2020, and particularly Singapore, with analysts judging the city-state has benefited from the diversion of visitors and economic activities away from Hong Kong. The news will no doubt be doubly welcome as FDI-dependent Singapore as it struggles with a slowing wider economy, with 2019 gross domestic product growth estimated at a sluggish 0.7% and electronics exports down. According to World Bank data, 2018 FDI inflows equalled over 23% of Hong Kong’s GDP and over 22% of Singapore’s – both percentages far higher than elsewhere in Southeast Asia, where the next highest was Cambodia’s 12.6%.

Singapore has long traded as regional finance capital and headquarters hub so much of its colossal investment total is really aimed at its neighbours.

Singapore’s 2019 FDI total – the fourth highest of any country – was down to “deals in the information and communication sector”, according to UNCTAD. Singapore has long traded as regional finance capital and headquarters hub – and regularly vies with Hong Kong near the top of the World Bank’s “Doing Business” rankings – so much of its colossal investment total is really aimed at its neighbours.

As noted in the 2019 ASEAN Investment Report published last year, “more than 80 per cent of FDI in finance in ASEAN last year went to Singapore. A significant part of that investment may be used to fund FDI activities throughout the region, given the importance of regional headquarters functions in Singapore.”

Some of that onward bounce likely went to the biggest country and economy in Southeast Asia, Indonesia, which saw a record $24billion in FDI, according to UNCTAD – perhaps a surprise given that 2019 was an election year that saw several rounds of violent political protests in major cities. Indonesia’s 12% increase on 2018 was down to “significant flows going into wholesale and retail trade (including the digital economy) and manufacturing,” according to UNCTAD.

The UNCTAD findings did not delve into any other Southeast Asian countries, but the 2019 ASEAN Investment Report put the previous years’ influx – also a record at the time – as down to “the gradual shift of production capacity from China and elsewhere to ASEAN, caused by structural factors (the increase in relative labour costs in China) and accelerated by the United States–China trade tensions.”

Vietnam has been widely-touted as Southeast Asia’s beneficiary-in-chief of the China-US trade tensions – which have abated, for now, with the signing of a Phase One deal that leaves most of the recently-imposed tariffs intact. Cambodia, too, has picked up FDI due to trade war dislocation, with inflows for the first half of 2019 up 9.4% on 2018’s $3.2billion record.

For all the gloomy assessments about the global economy, the “buoyant ASEAN region” as UNCTAD puts it, is standing out by posting world-beating investment growth.