Telling a story in the Philippines can be deadly. But if a right to know is to recover, this marks a start. 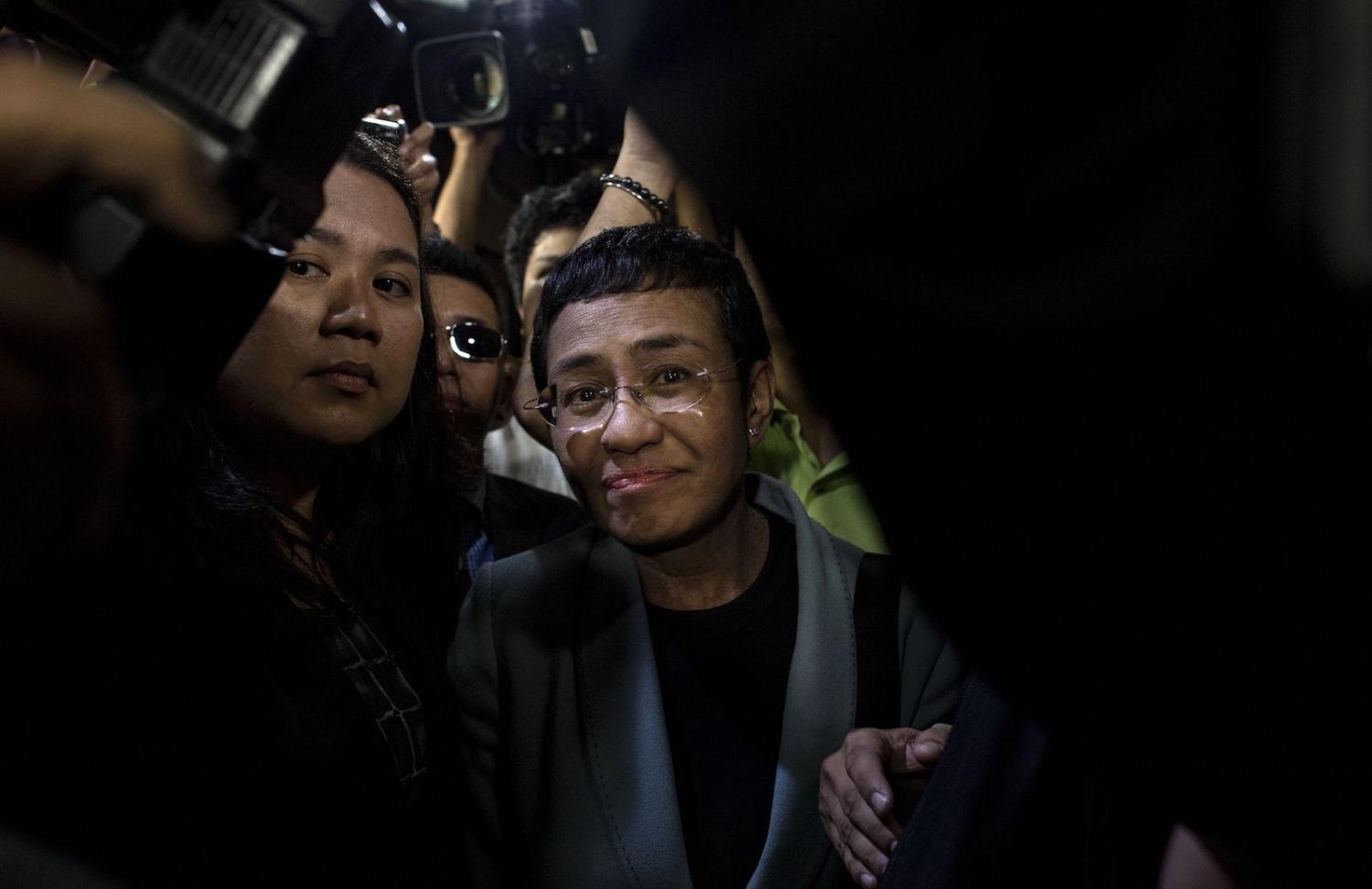 “Aren’t you guys getting tired of this?” A beaming Maria Ressa asked while sandwiched between four police escorts after being arrested in Manila. The throng of smartphone-filming journalists that was following her chuckled in response. “Aren’t you?” One journalist yelled back. “I don’t know,” said Ressa. “If you’re not, we are not also,” a journalist from the back exclaimed.

WATCH: Maria Ressa: Aren’t you guys getting tired of this? @cnnphilippines pic.twitter.com/IOlI9sNn43

This was in March 2019. I was one of the journalists wading along with the crowd through the cramped hallways of a police station as we followed Ressa to a local court to post bail again. The spectacle was too congested for me to look behind to check who started that heartwarming banter with Ressa, now a Nobel peace prize laureate and the first Filipino to win the award.

For its critical reporting on Philippine President Rodrigo Duterte’s policies, including his murderous war on drugs, Rappler, the media company Ressa co-founded, has been whipped with multiple shutdown attempts. Ressa, a former CNN journalist, was convicted of cyber libel, which she has appealed, and has also been facing a slew of other legal challenges.

That 2019 assignment was my first time following Ressa to detention and then a court visit. I remember the sight of the rusted steel bars of the police detention centre shook me. No, it was not first-timer intimidation – I had toured the maximum-security complex of the national prison four times to document stories. I was rattled because I could not help but think that if they can do that to a high-profile, well-connected journalist, imagine what they could do to someone like me – born to a family of farmers, without pedigree and dual citizenship as protection (Ressa is a Filipino-US dual citizen). Witnessing that triggered some of my existential questions about my career.

“See you at the bail!” Ressa shouted with an intriguing enthusiasm and a smile as she emerged from the detention unit. I was surprised, to say the least. Not that I was expecting a defeated journalist who would emotionally appeal for help. Perhaps, I just prepared myself to sense some hints of dejection. There she was, a visage of, not optimism and strength, but peace.

To me, Ressa seemed at peace about having to push back against the threats and go through all the troubles. She looked at peace to be in that situation however perilous. I can only surmise that her attitude was intentional. But I was thankful to have also witnessed that because I felt comforted. The sight appeased some of the fears I was feeling moments earlier.

The Philippines is one of the world’s most dangerous places for journalists. It’s where most journalist murderers run free and evade the law. Under Duterte’s populist regime, the law has been weaponised to systematically stifle critical voices and dissent. And Ressa is just one of the many targets.

A couple of months into the Covid-19 pandemic, the Philippine congress, dominated by the strongman’s allies, ruled to close down the TV station with the widest reach across the country. Lawmakers believe it was a well-deserved punishment for the TV giant’s perceived partiality and supposed tax evasion, which was already disproved by state tax officials. An anti-terror law – which generated fears it would be used to tag journalists and activists as terrorist sympathizers – was driven through.

If my generation of journalists has started worrying and erring on the side of caution, I wonder what aspiring journalists feel while watching us?

The pandemic response in the country has also been highly militarised. Journalists and activists have been arbitrarily arrested and detained. Since Duterte took office, 19 journalists have been slain, at least 61 lawyers murdered. The Philippines has also entered the presidential election season, which is historically the most violent period. In November 2009, 32 journalists were brutally killed in a single event. They followed the convoy of a political nominee en route to the filing of candidacy.

Telling a story in the Philippines could cost a life. Today, it is so hard to feel safe if you are a Filipino journalist. With the added dilemma of behaviour-modifying social media algorithms, disinformation, and influencer propaganda, most days working as a journalist feels like yelling into the void. If my generation of journalists has started worrying and erring on the side of caution, I wonder what aspiring journalists feel while watching us?

Duterte’s organised crackdown on press freedom and its “chilling effect” on journalists – of my time and the next generation – must be interrogated. Its long-term impact on domestic politics and civic spaces should be unpacked. Do Filipinos still understand who a journalist is? In the Philippines, press freedom has come to a point where pushing back against Duterte and the impending concentration of power in his allies is no longer enough to solve all the systemic maladies propagated by his regime. The same is true for many other democracies experiencing a relapse due to populism’s resurgence.

The Freedom House assured press freedom is resilient: “Experience has shown, however, that press freedom can rebound from even lengthy stints of repression.” I believe so, too. However, in the age of disinformation, bouncing back is much more testing. How do we ensure press freedom’s swift recovery in a time when journalists’ gatekeeping power has eroded and technology companies monopolise online ads, the lifeblood of many media companies?

This recent Nobel win of journalists is like Ressa’s intriguing enthusiasm and smile that I saw outside the detention unit. It’s comforting and reassuring. But it will not make us safe, at least for now. So for the sake of everyday journalists under attack, the world should see this Nobel prize as a chance to fortify press freedom.

Previous Article
Line in the sand: How sea-level rise is challenging international law
Next Article
Thailand’s military and human rights

Unblocking money flows in the Pacific

A crackdown on terrorist financing has had unintended negative consequences in developing countries.
Daniel Byman 22 Sep 2022 05:00

The movement is clearly capable of violence yet proved divided and poorly trained. But campaigning is another matter.
Erin Hurley 28 Jun 2022 12:13

The political courage of the January 6th investigation

The hearings may not persuade Trump’s most ardent supporters. But they might allow enough Republicans to break away.