Using inflation prospects as the sole criterion for policy-setting was always a convenient simplification for central banks.

For the countries affected by the 2007-08 financial crisis, the recovery has been lacklustre. There was no self-equilibrating 'V'-shaped return to the pre-crisis GDP growth trajectory (see the familiar graph below, or here). Nearly a decade on, the recovery may be more assured, but the performance of these economies raises doubts about the conventional macroeconomic wisdom that had guided policy for a generation. The implications for monetary, fiscal and financial policy are far-reaching. Top international bureaucrats and heavyweight economists are calling for a fundamental rethink. 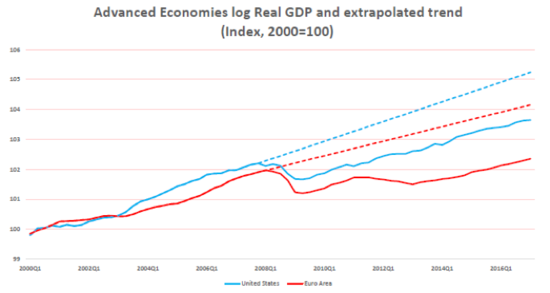 In the two decades before 2007, monetary policy was seen as the main counter-cyclical macro-instrument. Fiscal policy was left on auto-pilot – relying on just the cyclical variations in revenues and expenditures. Even monetary policy had modest objectives – the conventional wisdom was that monetary policy affected nominal magnitudes (prices) but had no impact on real output in the longer term. Thus, monetary policy should be directed at achieving price stability,  especially after the debilitating experience with 'stagflation' (the simultaneous existence of inflation and slow growth) in the 1970s.

Political pressure to over-stimulate the economy with low interest rates was seen as the main threat to price stability – the answer was to give central banks independence and an inflation target. The 'Great Moderation' (low inflation combined with good growth) in the fifteen years before 2007 seemed to validate the self-equilibrating nature of real growth and the minimalist price-stability role for monetary policy.

The post-crisis period has undermined this neat simplicity. Near-zero policy interest rates in the crisis countries weren't enough to ensure a strong recovery, or to encourage inflation to return to target. Huge expansion of central bank balance sheets through quantitative easing didn't rev up the economy. Even when the lacklustre recovery eventually brought unemployment rates down to full-employment levels, wages have remained somnolent. The Phillips curve relationship between unemployment and wages (low unemployment produces higher inflation), at the heart of macro-economic thinking and modelling, seems to have vanished.

All this is hardest to explain for the economists of the free-market-oriented Chicago School. 'Masterly inaction' has always been their firm policy recommendation. This view was reflected in early versions of inflation targeting, notably the pioneering New Zealand approach, which had a rigid focus on the inflation target and studiously ignored any real-economy variables such as GDP.

Not all economists had this belief in the self-equilibrating nature of the economy. For less single-minded economists, the monetary experience of the past decade requires some recalibration and footnoting, but can be explained within a less rigid version of conventional theory.

Why has monetary policy been so powerless to stimulate the weak recovery? There have always been doubts about the power of low interest rates to stimulate demand – 'pushing on a string' is an old simile. With the feeble recovery, demand was growing so slowly that few businesses wanted to borrow, even at low interest rates. More important, headwinds from crisis-damaged balance sheets (lending banks and borrowing enterprises) have been intense. Fiscal policy was tightened sharply during the recovery in response to debt concerns, a serious policy error that hobbled the recovery. When quantitative easing is judged with hindsight, it will be seen as a feeble instrument that flattened the yield curve but weighed down the balance sheets of banks with unwanted government debt. In short, low interest rates may well have had the expected stimulatory effect, but this was not enough to offset strongly contractionary factors.

But why has there been no appreciable rise in US inflation, when unemployment is now well below the level usually associated with full employment? Part of the answer may be that the usual measures of unemployment are no longer accurately measuring 'full employment' and pressure on wages. The most recent US figure shows historically low unemployment, just over 4%. But this partly reflects falls in labour market participation – workers dropped out of the labour force, no longer counted as unemployed. Participation is 62.8%, compared with over 66% before the crisis. There may be no great pressure on labour markets yet, as some of these drop-outs may return when demand is stronger.

Structural changes (especially increasing globalisation) has dampened both price and wage rises by offering alternative sources of supply. The success in stabilising inflation over recent decades has also anchored inflation expectations – one of the main drivers of ongoing inflation. This explains the flatter short-term Phillips curve. But it doesn't remove the longer-term constraint embodied in the Phillips curve: if demand pushes strongly against capacity constraints (which hasn't occurred yet), wages and inflation will rise.

If some combination of these factors can explain what has happened since 2007, what's the problem? Why so much agonising about ineffectual monetary policy? There seems no danger of generalised deflation – when negative inflation encourages people to delay spending, waiting for cheaper purchases. The current below-target inflation seems to leave room for further expansion, perhaps even closing some of the output gap with the pre-2007 growth trajectory.

This leaves two problems – one minor and one substantial.

The minor problem is that conventional inflation targeting relies on using inflation as the indicator of when the economy had reached full capacity. Without this, inflation-targeting central banks don't have a simple indicator for policy tightening.

The answer is that central banks should look at a wider range of indicators. To use inflation prospects as the sole criterion for policy-setting was always a convenient simplification. Now central banks need to add other indicators of economic slack, while retaining the two huge benefits of inflation targeting: its shield from political interference, and its ability to anchor inflation expectations.

One further tweak to the policy framework is needed. Monetary policy works by setting the short-term policy rate away from the long-term equilibrium neutral interest rate – lower when stimulus is needed and higher when contraction is appropriate. But leaving the policy rate well below the neutral rate for an extended time (as has occurred since the 2007 crisis) introduces persistent distortions. Asset prices are bid up; risk-taking is encouraged; projects are undertaken that would not be viable with normal interest rates; balance sheet valuations are muddled; and pension plans are put in disarray. Central banks have to weigh the benefits of stimulatory settings against these distortions. The US Fed's gradual policy rises, even when prospective inflation is still below target, reflect these concerns.

This leaves a more important and intractable challenge. Why is the pre-crisis GDP trend-line apparently unattainable now? Why is the growth trajectory flatter? Did the crisis reduce the effective labour force through hysteresis? Did the slow recovery discourage investment, dampen innovation and stifle productivity growth? Has an adverse shift in income distribution or demographics reduced the economy's dynamism?

Resolving these issues is more important than the headline-grabbing perpetual debate about interest rate settings. Too much was expected of monetary policy over the past decade, perhaps encouraged by Ben Bernanke's activism and confidence that deflation could be avoided. It is a limited tool that can't be held responsible for diminished growth prospects.

So, what's holding back growth? We'll return to these issues another time.

Previous Article
The puzzling demise of Lebanon’s Sa’ad Hariri
Next Article
Migration and border policy links: Manus, stateless minorities, the next steps on Myanmar and more

He could soon be leading the country in volatile times but what does Peter Dutton think of the world beyond the border?
Dougal Robinson 30 Mar 2017 16:35

If Trump can’t get a handle on Washington’s politics – not least the requirement to work with Congress – US foreign policy will suffer.