Moscow may turn to the Collective Security Treaty Organisation in Central Asia to prove its regional standing is intact. 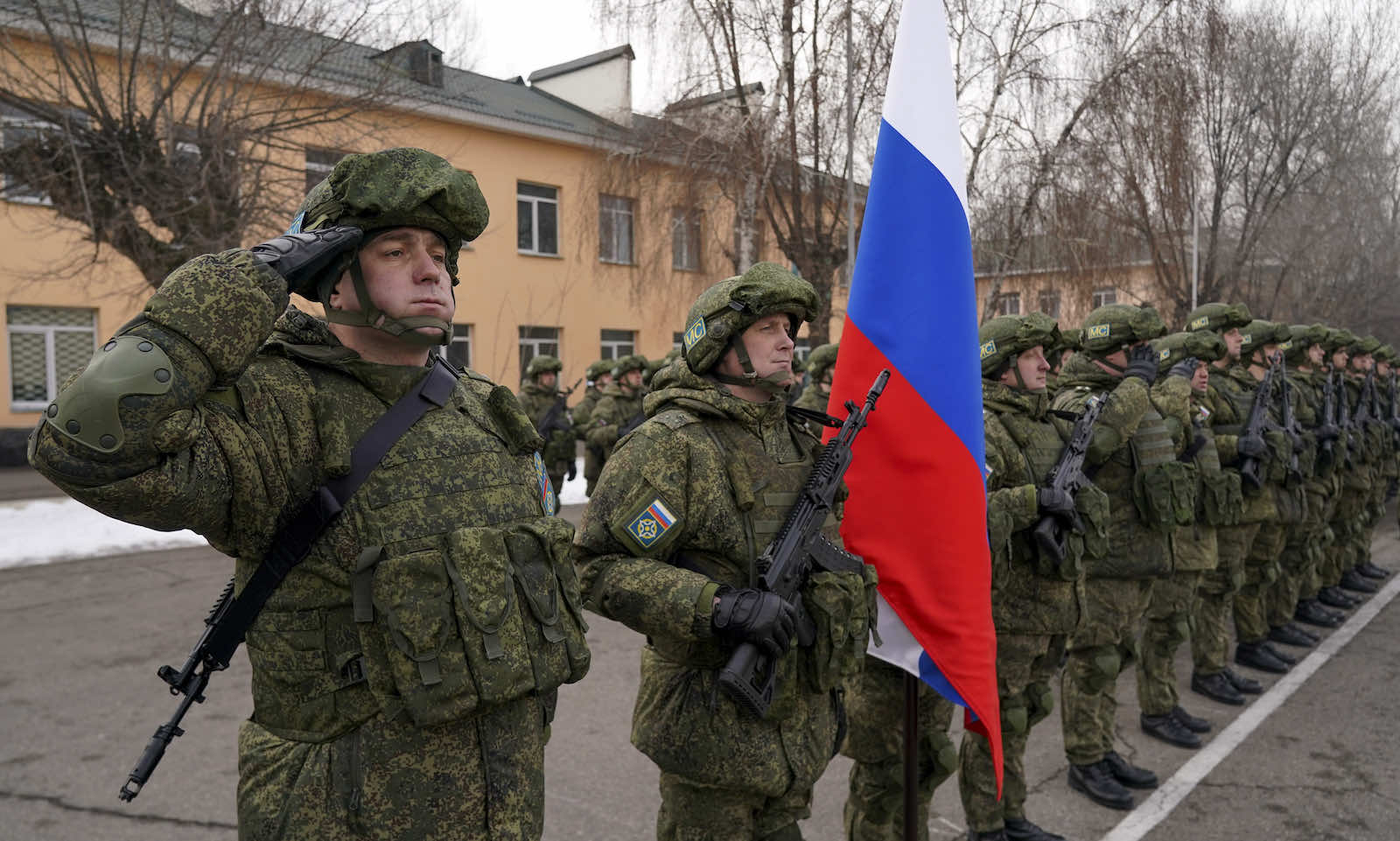 Soldiers at a ceremony in Kazakhstan in January to mark the gradual withdrawal of troops deployed under the auspices of the Collective Security Treaty Organisation following local unrest (Pavel Pavlov/Anadolu Agency via Getty Images)
Published 30 Mar 2022 11:00   0 Comments

As a consequence of its actions, Russia faces potentially stifling isolation. Russia will want to show the limits of this isolation through regional frameworks that also enable the Russian military to act as the dominant power. The Collective Security Treaty Organisation (CSTO) offers Russia this framework, with Central Asia the backdrop.

To show its regional status remains intact, Russia will act proactively, to deflect and deny any concerns partners may have about its effectiveness as a security actor. If the Russian military appears weakened and unable to provide security for CSTO members, and China feels the need to fill the void, Russian influence will decrease markedly in the region, further weakening Russian influence in the post-Soviet space.

The attraction of multilateralism

The CSTO’s Secretary General, Stanislav Zas, told Reuters on 19 February that CSTO peacekeepers could be sent into the Donbas should there be an “international consensus” for their deployment. This followed the first deployment of CSTO peacekeepers in the organisation’s history in January, to stabilise unrest in Kazakhstan, at the request of President Kassym-Jomart Tokayev. On 3 March, Russian President Vladimir Putin submitted a protocol to the State Duma for ratification, which would enable the deployment of CSTO forces as UN peacekeepers.

All of which suggests a more active future for the organisation. Particularly as this shows Russia as the leading power in a multilateral organisation, not a depleted, isolated, and lonely force. The organisation also underlines Russia’s security role in the region, after all, despite increasing Chinese influence in Central Asia, the Kazakh authorities called upon the CSTO and not the more Chinese-oriented Shanghai Cooperation Organisation (SCO) to gain control of the situation.

Immense sanctions have been placed on Russia. Due to the level of economic integration many Central Asian countries have with Russia through regional organisations such as the Eurasian Economic Union (EAEU), they too, are affected. Remittances from Central Asian workers in Russia play a vital role in these economies, which will be significantly reduced.

An influx of largely young men to countries with little economic prospects to offer them will have a destabilising impact.

These second order effects from sanctions may stimulate unrest through economic issues and grievances amongst Central Asian populations, similar to the unrest in Kazakhstan in January, in turn providing a greater opportunity and pretext for CSTO involvement in Central Asia, through stabilising missions and interventions claiming to be stopping “colour revolutions” and terrorists. Many Central Asians working in Russia will be forced to return home as work opportunities decline. An influx of largely young men to countries with little economic prospects to offer them will have a destabilising impact. Russia may soon be called upon to quell unrest in the guise of the CSTO, unrest the Kremlin is largely responsible for.

Sergey Naryshkin, head of Russia’s Foreign Intelligence Service, reportedly commented in February about threats from Afghanistan following the departure of US-led forces, with the heroin trade and the potential for Islamist extremists using Afghan territory as Russia’s main concerns. Combating drug trafficking in Central Asia appears a particular priority in 2022 for the CSTO. Russia’s Central Military District has increased the number of joint-exercises with Central Asian countries for 2022, citing new military threats in the region; training for Russian forces in Tajikistan has been set to double. While Russian officials have regularly criticised US-led operations in Afghanistan, they have also been beneficiaries of these operations, as terror groups were both busy being targeted by US-led forces, and busy targeting US-led forces, leaving little opportunity for these groups to mount attacks across Central Asia.

Central Asian terror groups operating in Afghanistan are regrouping. A recent UN Security Council report notes the Taliban have not constrained the activities of foreign terror groups and fighters within Afghanistan, instead, “terrorist groups enjoy greater freedom there than at any time in recent history”.

The same report states the concerns of many Central Asian officials about the level of freedom that Central Asian terror groups – Islamic Jihad Group (IJG), Khatiba Imam al-Bukhari (KIB), and Islamic Movement of Uzbekistan (IMU) – have within Afghanistan, with the groups’ numbers increasing through local recruitment. The Taliban plans to create a “grand army”, utilising abandoned US and Afghan National Security Forces (ANSF) equipment, with Taliban officials stating members of the International Security Assistance Force (ISAF) trained ANSF will join these ranks.

Although traditionally only concerned with Afghan territory, a Taliban-grand army may pose a greater threat should events such as the recent Taliban-Turkmenistan border skirmish escalate, or in a deterioration of already fraught relations with CSTO member Tajikistan. Of greater concern, the Islamic State in Iraq and the Levant – Khorasan (ISIL-K) is now assessed to have grown to nearly 4,000 fighters in Afghanistan, whose ambitions certainly are not limited to that territory.

As humanitarian issues in Afghanistan only increase, and the possibility of factionalism returning to Afghanistan, other spill over effects may further contribute to regional instability the CSTO will want to redress, with Russia at its head.